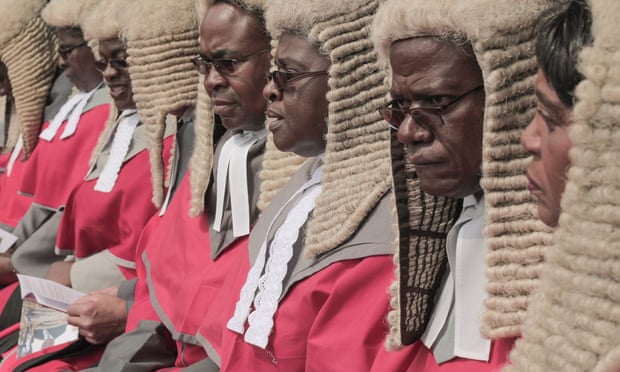 Supreme court judges look on as Emmerson Mnangagwa is sworn in as Zimbabwe’s president at a ceremony in Harare in November 2017.
Photograph: Belal Khaled/Nur Photo/Getty Images

5 Apr 2019 – Lawyers in Zimbabwe have hit out at a government decision to spend thousands of pounds on wigs made in England for local judges, saying the tradition evokes a colonial past that should not exist in modern Zimbabwe.

Zimbabwe’s judicial services commission has placed an order for 64 wigs from Stanley Ley Legal Outfitters in London, at a cost of £118,400.

Zimbabweans reacted with anger on social media, questioning the wisdom of the government’s expenditure at a time when courtrooms are cramped and ill-equipped, the national economy is crumbling and, according to the World Food Programme, 63% of the population live below the poverty line.

Their sentiments were echoed by Dumisani Nkomo, chief executive of Bulawayo-based rights organisation Habakkuk Trust, who said: “These are misplaced priorities. We need to focus on bread and butter issues and avoid expenditure on unnecessary luxuries.”

After poor rains and erratic weather destroyed crops, almost 5.3 million people in Zimbabwe are facing food insecurity; in 2017, the country was ranked 108th out of the 119 included in the global hunger index. The government has previously pledged to cut expenditure in response to rising food prices linked with the introduction of a new currency in February.

Lawyers in Harare said the government was wasting money on keeping a colonial tradition alive.

Beatrice Mtetwa, a senior lawyer in the capital, said Zimbabwe’s British colonial past remained embedded in its justice system.

“What surprises me in Zimbabwe is that we say everything against colonialism but we live more colonial than the colonisers themselves,” Mtetwa said. “A normal litigant would be intimidated to get into a courtroom full of ridiculously dressed judges. Why can we not dress decently? If we want to wear wigs , why can’t we make them in our own way? Those wigs were meant for white judges – we look ridiculous.”

Luke Malaba, Zimbabwe’s chief justice, has reportedly insisted on the use of wigs during proceedings.

Some of the wigs, made from horsehair, were delivered last week.

“I think we should move away from that culture to where judges look like an ordinary man and so that the courts look humane. We should simply believe that if a judge appears wearing a suit, it will not make them less of a judge,” Muchadehama said.

More: Doctors in Zimbabwe ‘sending patients away to die’ as drug shortages bite

The use of wigs has been abandoned in South Africa, Kenya and several other Commonwealth countries.

“In my view, it’s a bit unnecessary. From an ideological point of view, those wigs take us back to the colonial era. They make our courts inaccessible by the ordinary man. If the judicial services commission spends that money on rehabilitating dilapidated courts, that would make a lot of sense,” said Doug Coltart, a human rights lawyer.