ANGLO AMERICA, LATIN AMERICA AND THE CARIBBEAN, 13 May 2019

Those who illegally broke into the diplomatic building were not arrested by U.S. authorities. 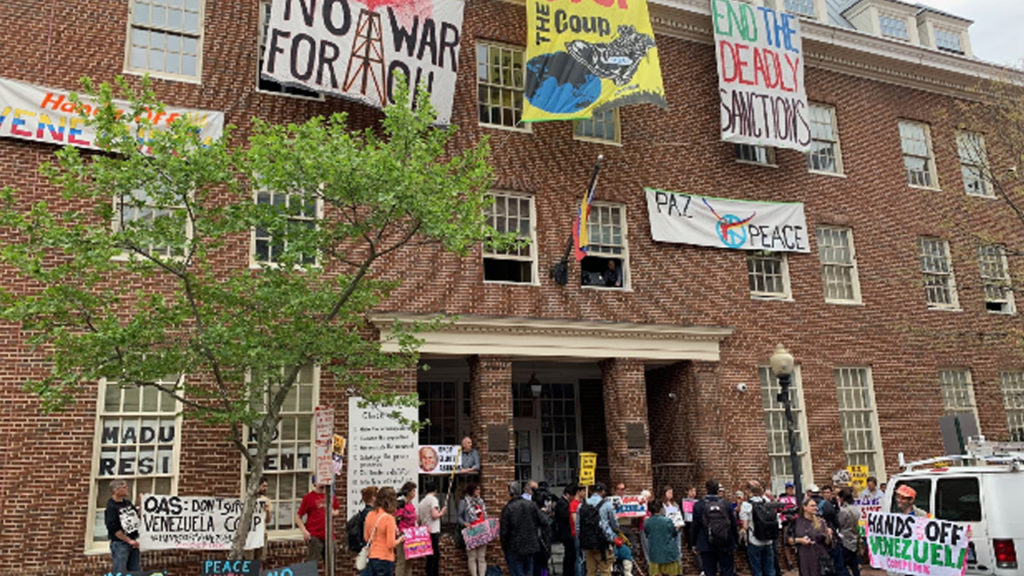 RELATED: Power Cut at Venezuela Embassy in US as Anti-War Activists Clash with Opposition Supporters

“In the middle of the night, two people broke the windows in the basement and broke inside. One of them left voluntarily but we have to get the Secret Service to escort the other one out,” Benjamin said and added that none of the intruders were arrested by U.S. authorities, although their actions were clearly illegal.

She also mentioned that Code Pink activists have not able to get any food or medicine inside the embassy because the “pro-Guaidó people are blocking us every time we try to do it and physically attacking us.” After each violent attack, however, “they don’t get arrested either.”

Meanwhile, pro-Venezuela activists get brutally attacked for trying to help the defenders in the embassy. Partnership for Civil Rights Fund shared a tweet showing a 70-year old supporter  and U.S. veteran bleeding from the head for trying to bring a cucumber into the embassy:

Regarding the lack of electricity inside the Venezuelan embassy, Benjamin maintained that the U.S. State Department told the local power company that the building’s owner is Carlos Veccio, “who is the fake ambassador of the fake government of Juan Guaidó … and told them to turn off the electricity.”

The Poor People’s Economic Human Rights Campaign #poorpeoplesarmy at Pepco in DC demanding it turn the power back on to the Venezuelan embassy. pic.twitter.com/voLPGr2cZU

The human rights defender told teleSUR that supporters of the Bolivarian people will keep having demonstrations outside the embassy even on Mothers’ Day, celebrated Sunday in the U.S.

“We are asking people to come on Sunday and honor mothers around the world here,” she said.

Since April 10, the Venezuelan embassy has been protected from inside by EPC volunteers. These grassroots human rights defenders have committed themselves to protect the Bolivarian embassy from being taken over by Guaidó supporters, who attempted to carry out a coup d’etat against President Nicolas Maduro on April 30.

According to EPC reports, the Bolivarian embassy has been surrounded by the U.S. Secret Service, the D.C. police, and Guaidó supporters since at least a month ago.

Just a few hours before the embassy incident, the Venezuelan Foreign Ministry again warned that the U.S. is promoting, organizing and financing “an irresponsible campaign aimed at changing the government by force,” which demonstrates “contempt for sovereignty, peace, and democracy.”