The world would be richer and healthier if the full costs of fossil fuels were paid, according to a new report from the International Monetary Fund. 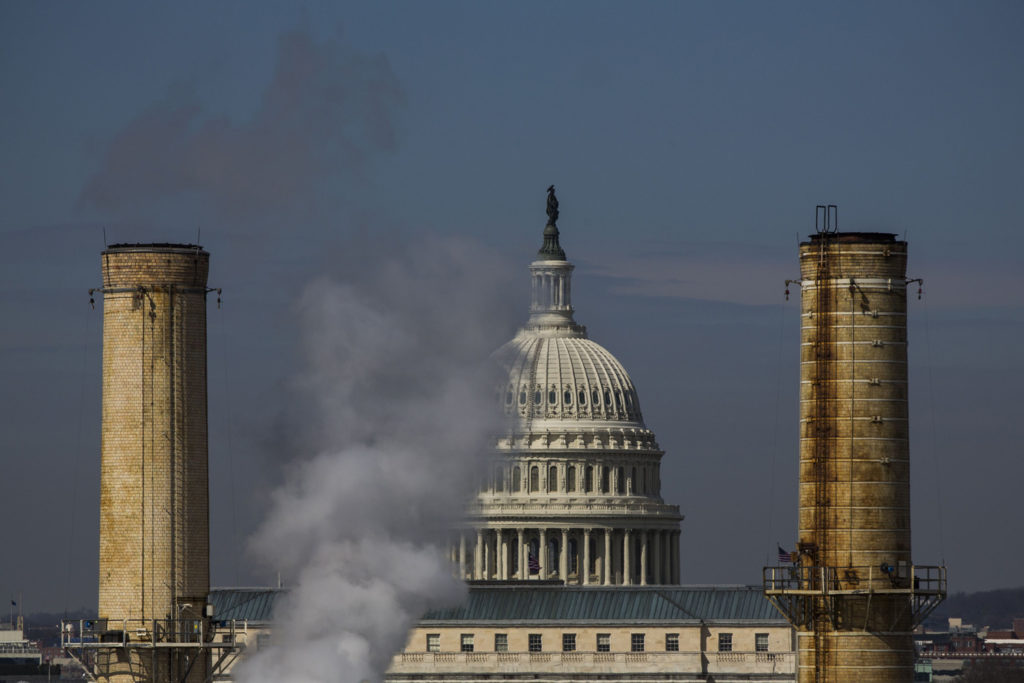 The dome of the U.S. Capitol is seen behind the smoke stacks of the Capitol Power Plant, the only coal-burning power plant in Washington, D.C. -Jim Lo Scalzo/EPA/REX/Shuttersto

8 May 2019 – The United States has spent more subsidizing fossil fuels in recent years than it has on defense spending, according to a new report from the International Monetary Fund.

The IMF found that direct and indirect subsidies for coal, oil and gas in the U.S. reached $649 billion in 2015. Pentagon spending that same year was $599 billion.

The study defines “subsidy” very broadly, as many economists do. It accounts for the “differences between actual consumer fuel prices and how much consumers would pay if prices fully reflected supply costs plus the taxes needed to reflect environmental costs” and other damage, including premature deaths from air pollution.

These subsidies are largely invisible to the public, and don’t appear in national budgets. But according the the IMF, the world spent $4.7 trillion — or 6.3 percent of global GDP — in 2015 to subsidize fossil fuel use, a figure it estimated rose to $5.2 trillion in 2017. China, which is heavily reliant on coal and has major air-pollution problems, was the largest subsidizer by far, at $1.4 trillion in 2015. But the U.S. ranked second in the world.

The human, environmental and economic toll of these subsidies is shocking to the conscience. The authors found that if fossil fuels had been fairly priced in 2015, global carbon emissions would have been slashed by 28 percent. Deaths from fossil fuel-linked air pollution would have dropped by nearly half.

Oil, gas and coal companies — and their stooges in public office — have long argued that making consumers pay for the full impacts of fossil fuel use would cripple the economy. The IMF experts call bullshit on this idea, revealing that the world would, in fact, be more prosperous. Eliminating subsidies for fossil fuels would have created global “net economic welfare gains” in 2015 of “more than $1.3 trillion, or 1.7 percent of global GDP,” the study found. (These net gains are “calculated as the benefits from reduced environmental damage and higher revenue minus the losses from consumers facing higher energy prices.”)

At the opening of the IMF’s spring meetings in April, Managing Director Christine Lagarde laid out the benefits she sees in properly pricing fossil fuels. “The numbers are quite staggering” she said, referring to the savings that could be achieved “fiscally, but also in terms of human life, if there had been the right price on carbon emission as of 2015.”

Lagarde continued to rattle off the benefits to humanity of realizing these savings. “There would be more public spending available to build hospitals, to build roads, to build schools and to support education and health for the people,” she said.

For Lagarde and the IMF, the conclusion was obvious: “We believe that removing fossil fuel subsidies is the right way to go.”