Venezuela’s Crisis: A View from the Communes 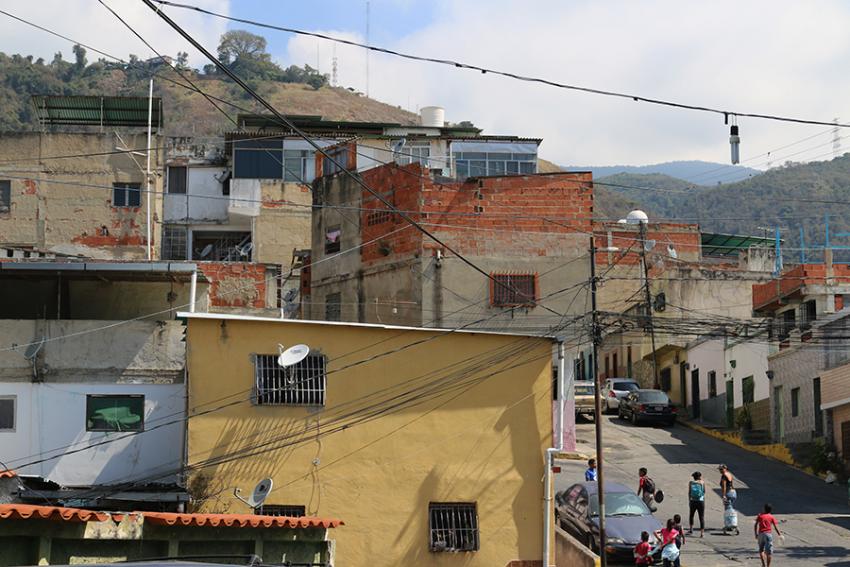 10 May 2019 – Within hours of Venezuelan opposition leader Juan Guaidó calling for street mobilisations to back his attempted military coup against President Nicolás Maduro on April 30, Guaidó’s supporters had looted and set fire to the headquarters of the Indio Caricuao Commune in south-west Caracas.

The building was used for local residents’ meetings and housed a commune-run textile enterprise, which funds projects in the community.

Atenea Jiménez, from the National Network of Comuneros (commune activists) said: “Once again attacks on the communes by fascist sectors have begun.”

She also noted however that comuneros “are facing persecution by sections of the government”, in reference to the March 23 arrest and 71-day long detention of 10 comuneros who occupied a state-owned rice processing plant in Portuguesa state. The occupation denounced the fact that private management who were hired to run it refused to work with local producers.

“Why is this occurring? Because the commune is the only space that disputes power … it is one of the few, genuine, self-convened spaces for building direct democracy,” she said.

Venezuela’s communes seek to bring together communal councils that encompass 200–400 families in urban areas and 20–50 families in rural areas, to tackle issues such as housing, health, education and access to basic services in the local community. Decisions about problems to prioritise and how to tackle them are made in citizen’s assemblies.

The idea of the commune is for local communities to take on bigger projects and become self-sustaining through enterprises owned and run by the community.

Former president Hugo Chavez viewed the communes as the fundamental building blocks of a new communal state based on self-management and participatory democracy.

According to the Ministry of Communes, there are currently more than 47,000 registered communal councils and close to 3000 communes, though many of the activists I spoke to on my visit to Venezuela in March said they believed the number of genuine communes and councils was less.

Jimenez explained: “The comunero movement involves communes that have been consolidating themselves over the past 10 years.”

During this time, “new communes have emerged, interesting advances have occurred and, of course, there have been communes that have fallen by the wayside.

“But the communes remain active and have achieved a very interesting level of political and ideological consolidation — and a determination to continue advancing.

“What we have is the consolidation of 10 years of work and a strength based on the knowledge that there are problems, but that together we can resolve them through self-management.”

Gsus Garcia, from the Altos de Lidice Socialist Commune, which unites seven communal councils high up on Caracas’ hillside in La Pastora, explained that the commune came about because “local community councils realised they shared the same problems, but on their own they would not be able to resolve them.”

He added that the commune “is not simply about getting together to resolve problems, we want to go beyond that to build genuine self-government.”

While Garcia acknowledges that Chavistas (Chavez supporters) have been at the heart of the creation of the communes, Altos de Lidice Commune also includes residents who oppose Maduro.

“There are many who are discontented, there is a lot of opposition. And yet they involve themselves in the dynamic of the commune; they don’t reject it, they accept it and little by little they understand that, together, we can do more.

“They see that if we don’t come together, both of us will suffer. So we have to have patience and understand each other.

“I have been surprised by the level of patience. I think that in any other country, with everything that has happened this year and last year, that country would have exploded.”

In the nearby 23 de Enero neighbourhood, the Panal 2021 Commune, involving eight communal councils and about 3600 families, is an example of the kind of local self-government many comuneros envisage.

Cucaracho, an activist with Panal 2021, explained that the commune began with activists raising funds through raffles and activities. The commune passed through a period of co-management, receiving state funds for projects, and was now self-managed.

Panal 2021 has its own bakeries, a textile and sugar packaging plant, and a food storage and distribution centre. Proceeds from these communally-run enterprises are deposited in a communal bank, with citizen’s assemblies deciding how funds are redistributed for community projects.

The ability of Panal 2021 to generate its own revenue, as with most of the communes that exist today, has been key to its ongoing existence. With the onset of the economic crisis, the state has largely stopped handing over funds to local communities.

Julian from the Bolivar and Zamora Revolutionary Current, a radical grassroots current within the PSUV (United Socialist Party of Venezuela), believes this has had an impact on the level of community organising. “When the government funded projects, it created certain expectations and encouraged participation, as people felt their problems could be resolved.

“But given the strong rentier culture that exists, what has happened is that many have said: ‘If we don’t receive anything, then we can’t do anything’. In those cases, community councils largely limit themselves to administering the distribution of government services such as gas bottles in their community.

“The error was that the focus was put on promoting initial participation while less attention was paid to helping build the capacity of communities to self-organise.

“Those communes that are most active today are the ones that don’t have much to do with the government and the [PSUV] doesn’t control them.”

Producing and distributing food to meet community needs in times of crisis has become a priority for many communes, including in Caracas.

Panal 2021 has linked up with communes in the countryside to bring food to the city and sell it at much cheaper prices than private supermarkets.

Jimenez said many communes are doing the same, “There are systems for the exchange of food and services between communes, which function with different levels of complexity but which have been improving.”

Despite — or perhaps because of — its importance, food production and distribution has been a key point of tension between the state and the comunero movement.

Several years ago, the National Network of Comuneros handed over a proposal to Maduro for the creation of a nationwide communal enterprise for food production and distribution.

The idea was that all the communes and campesinos could distribute their produce via a system controlled by the people rather than private intermediaries, to ensure cheap food reached those who needed it.

Jimenez explained: “Our vision for the enterprise was that everything produced in the countryside needs to be distributed and not lost, and that only after this should we import what we cannot produce — not the reverse.”

Instead, the government initiated the Local Committees for Food Distribution and Production, commonly known by their Spanish acronym, CLAPs.

Jimenez notes that despite “the P — for production — being in its name, those that are producing, the campesinos and comuneros, were not included” in the process of forming the CLAPs. Instead, these committees are largely controlled by local PSUV officials and “everything that is distributed through the CLAPs is imported.”

Jimenez said this meant “putting to one side the organisations that exist because they’re more difficult to control, because in a commune a proposal has to be debated in an assembly, whereas with the CLAPs you can simply tell people what to do.”

In practice this has meant that in many communities the CLAPs have surpassed the communes as the focus of community organising, according to Julian. “It’s not that the other structures don’t exist, it’s that the most dynamic structure is the CLAP because access to food is the most important issue for many.

“In some cases, the CLAPs have weakened the communes and I believe that this has been deliberate because the CLAPs respond to the party, but the communes don’t.

“The party has never played a key role in promoting communes and communal councils, with the exception that in a few places; the party has concentrated more on electoral issues, on government.

“There is a conception that the comuneros are in permanent conflict with the party, with the local mayor or governor, due to the very dynamic of the communes, which are based on the idea of self-government.

“Comuneros have proposed the transfer of responsibilities from municipal councils to the commune to allow people to begin to self-govern.

“This has created a tension between the comunero movement, on one hand, and the party and local government officials on the other, who don’t want to transfer responsibilities such as rubbish collection in Caracas, because in many cases for them it’s a business.

“I believe the conclusion the party came to with the CLAPs was that it had to create and control them. They could not control the communes because of their democratic, contestational, irreverent nature, but they could designate who ran the CLAPs.

“The strong rentier and clientalist culture that exists meant that people gravitated towards the CLAPs, which were being funded and supported by the government, and converted the CLAPs into the centre of organising in many places.”

Summing up the situation, Garcia said: “The state doesn’t have the ability to resolve all the problems, given the current mess, but people are trying everywhere to resolve their issues.

“And yet one of the big problems that the government has is that it’s difficult for it to cede space, it doesn’t want to let go of the reins, so that the people can solve their problems.

“So what exists is a love-hate relationship between the government and the commune.

“Even with all its weaknesses and failures, it’s our state, it’s our government. At the same time, we have a relationship in which we have to struggle. We’re not going to deny that.

“There are things that don’t get to us that we need to produce food, at a time when we are importing almost all the food we need. But instead of helping, the state puts up all these bureaucratic hurdles, when all we’re trying to do is to guarantee that people have food and deal with the situation of children with malnutrition.

“We are clear, however, that only with this government can we do what we are doing with the communes. In another government, we would not have this possibility, much less with the type of right-wing government Guaido wants to install with his coup.”

Regardless of what happens next in Venezuela, Julian believes that the strong level of community organisation built up over the past two decades will not go away easily. “There’s still a lot of strength, a high level of organisation. Wherever you look, you will find a commune, a cooperative, some kind of committee or organisation.