The evidence is now overwhelming — Lula was the victim of a politically motivated campaign to keep him from returning to power in Brazil. He must be freed. 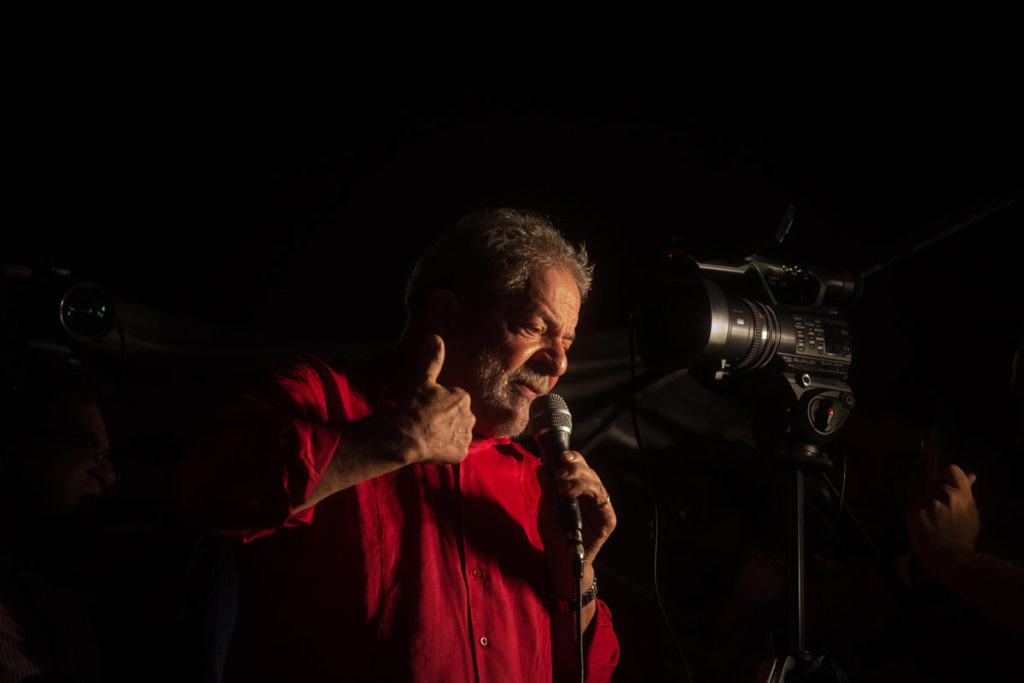 15 Jun 2019 – The revelations uncovered about the case against former Brazilian president Lula da Silva, jailed in April last year, vindicate a year of campaigning for his freedom. But this isn’t just about Lula, the consequences of this miscarriage of justice are huge.

This last week the Intercept published a range of documents that show Lula’s conviction was politically motivated and aimed at stopping him running in the 2018 presidential election. With front-runner Lula out of the race (he was polling over double of his election rivals at the time of his arrest) far-right candidate Jair Bolsonaro went on to win the election. Lula’s prosecuting Judge Sergio Moro was then appointed Minister of Justice.

Lula was convicted for “indeterminate acts of corruption” and accused of receiving an apartment in the form of a bribe. The investigation was part of a sweeping corruption probe called the “Car Wash” (Lava Jato) Operation that caused a huge political uproar in Brazil. It claimed to be neutral, and its star Judge Sergio Moro claimed to be above politics.

The investigation was even hailed by the national and international media, and Moro was named in the Time 100 list.

At the time of Lula’s arrest, numerous campaigners argued that the investigation against him was an abuse of the judicial system — illegal wiretaps on his family and legal team, lack of material evidence, and evidence of his innocence systematically ignored. The argument against his trial’s fairness is now indisputable.

The released documents show that Judge Moro acted with blatant disregard for the principles of neutrality. While claiming to be impartial, Moro was secretly collaborating with the prosecution to design the very case he was supposed to be ruling over.

Moro was communicating with, and directing, leading prosecutor Deltan  Dallagnol, whose case he was later supposed to judge. The explosive files even show that the prosecution themselves didn’t think there was enough evidence to convict Lula — but they pushed ahead anyway. And why not? They knew that the overseeing judge wanted to convict him.

You don’t need a legal background to recognize this abuse of the justice system for political ends. As the Intercept journalist Glenn Greenwald said, this is “a complete and undeniable violation of every ethical rule that governs what a judge can do.”

Not only were the investigators attempting to discredit Lula, these documents show that they wanted to destroy the Brazilian Workers’ Party (PT) and the huge progressive gains they made in poverty reduction, social mobility, and other areas, ensuring that the right wing returned to political dominance in the process. The files show the prosecuting team directly intervening in politics by working to stop Lula giving interviews from prison in case it helped the chances of Fernando Haddad, Lula’s replacement candidate, in the election.

The ramifications of this now-disgraced investigation have been enormous.  Bolsonaro and the far right rode to power on the back of Lula’s removal from the political process and the anti-PT sentiment fostered by Judge Moro. With  Bolsonaro’s rise to power has come an agenda of privatization, slashing budgets and dismantling the education system, attacking trade unions, social welfare, and environmental protections, and threatening Brazil’s LGBT and indigenous populations.

Brazil now has a president who doesn’t believe in climate change (his ministers believe that it’s a “Marxist plot”), who wants to row back all progress made in protecting the Amazon rainforest and who supports Donald Trump’s political interventions on the world stage.

With their praise for Judge Moro and his actions, respected institutions across the globe facilitated this situation by paving the way for Bolsonaro’s rise to power.

This case hasn’t just affected Lula’s freedom or the democratic right of two hundred million Brazilians, the example he sets for aspiring far-right authoritarians, wherever they may be, impacts all of us.

The only response from Brazil’s right has been outright denial and personal attacks on the journalists involved. In a climate where progressive councilwoman and human rights campaigner Marielle Franco was politically assassinated last year, we need to take this fight seriously.

These revelations could be a “Watergate” moment for Brazil. We must insist they are not ignored and continue to push for Lula’s freedom.

Tony Burke is assistant general secretary of Unite the union. He is the vice-chair of the Brazil Solidarity Initiative.