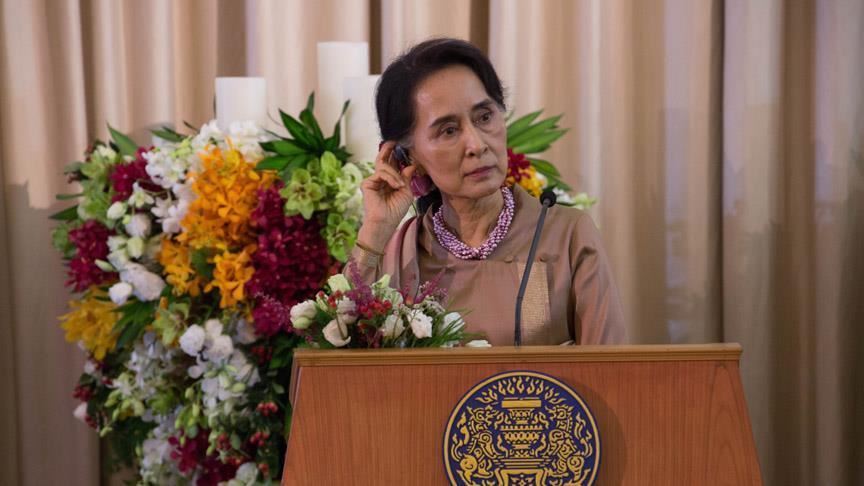 That is, fear for my Muslim friends back home in Mandalay in particular and Myanmar’s Muslims in general, including the systematically persecuted Rohingya.

The two reportedly exchanged their unconcealed fear and loathing of Muslims and migrants.

In Suu Kyi’s Myanmar the military has very successfully misframed the country’s Rohingya people as illegal Bengali migrants from across the borders in Muslim Bangladesh. Myanmar’s icon of democratic transition has become the killers’ echo-chamber wittingly.

In my 30 years of political activism and scholarship about my country’s affairs, I have learned to read well the deeply racialised Burmese society, politicized Buddhist Order and the ultra-nationalist Tatmadaw or the military. And I had for years supported the woman the country’s Buddhist majority call, with undying affection, Mother Suu, and have very closely studied her words, deeds and even facial expressions over these last three decades.

I can tell that the pictures from Budapest weren’t simply about Myanmar state counsellor performing in accord with the diplomatic protocol of being polite to the host and looking pleasant for the camera. It was more like a meeting of two racist, xenophobic minds, which are typically indifferent to either the warnings of the Fascist histories of the two respective countries during the World War II, or the ugly facts on ground including the countries’ Islamophobic policies.

In a report by the Council of Europe’s commissioner for human rights, Orban’s administration has been accused of spreading “xenophobic attitudes, fear and hatred” while Orban himself is emerging as a pivotal figure among European and North American far-right leaders and demagogues, from Trump’s former right hand Steve Bannon to former U.K. Independence Party leader Nigel Farage.

In the case of Myanmar, the UN Independent International Fact-Finding Mission officially accuses her civilian leadership of being involved in the ongoing genocide against Muslim Rohingya.

According to the Orban government’s statement following their meeting, Suu Kyi and Orban “highlighted” “migration” and “the issue of co-existence with continuously growing Muslim populations” as the two “greatest challenges” to “South-East Asia and Europe”.

This is not the first-time when Myanmar’s state counsellor shared the limelight with a far-right leader and echoed unconcealed racist views about Muslims.

In September 2017, Suu Kyi shared the press podium with India’s Prime Minister Narendra Modi, the Hindu fundamentalist, from where both leaders openly misframed Myanmar’s mass persecution of Rohingya as a state’s legitimate response to “terror” — that is, “Muslim terror”. In her words: “I would like to thank India for taking a strong stand on the terror threat that Myanmar faced recently.”

I have noticed how the Burmese leader — whom I supported so actively for my first 15 years of international activism in the diaspora in the United States — keeps on shifting her justifications for the anti-Muslim racism which has infested Myanmar’s public opinions, government policies — and her own views.

As early as October 2013, on Britain’s domestic flagship BBC Four — Suu Kyi framed her own views of Muslims as a general Burmese popular perception.

Suu Kyi, then the country’s iconic opposition leader, said to the British interview host Mishal Husain, a British Muslim: “I think you will accept that there is a perception that the global Muslim power is very great. Certainly, this is a perception in many parts of the world — and in our country too.”

Six years since her shocking interview, Myanmar’s Suu Kyi, now in power as state counsellor and foreign minister, has come out of her closet of Islamophobia, making a common cause with one of Europe’s certifiably far-right national leaders.

Her concerns about the growing immigration and the problem of the ever-growing Muslim population at home in Myanmar are not supported by facts.

In 2012, the then serving Minister of Immigration and former chief of police Brig. Khin Yi put the Rohingya population at about 1.33 million, a conservative estimate, subsequent to the two bouts of organized violence against Muslims in Rakhine state. Similarly, his boss ex-General and President Thein Sein also told the Voice of America Burmese Language Service in July the same year that “we discovered that the great majority of ‘Bengali’ [i.e. official racist reference to Rohingya] were born in our country after our independence.” These facts make it impossible to frame Rohingya as “immigrants” from the neighboring Bangladesh.

Myanmar’s pervasive, grinding poverty — contrary to the misleading GDP statistics and mildly positive economic forecasts — and decades of political repression by the country’s security forces, Myanmar’s brain-drain and the out-migration of Burmese continue unabated. Today estimated 4-5 million Burmese of all ethnic and religious backgrounds, that is, at the ratio of 1 in 10 persons, have left the country as largely migrant laborers to South East Asia’s middle-income countries such as Thailand, Malaysia and, to a lesser extent, Singapore. After Syria, Myanmar is the world’s largest producer of refugees, the great majority of whom are Muslims.

Besides, Myanmar’s Muslim population of which the Rohingya are numerically the largest group — out of a total of 16 groups — is not growing. It is quite the opposite.

Seven years on, only about 0.33 million Rohingya remain in their country of origin — with 120,000 of them in the barbed-wired internally displaced camps from where they are not allowed to leave.

According to the UN fact-finding mission, Myanmar obliterated roughly 400 Rohingya villages during the Burmese military’s “security clearance operations” of 2017 and slaughtered thousands of Muslims including infants, children, women, men and elderly people. The actual death-toll may never be known, but the number of Rohingya slaughtered is certainly far greater than those Bosniaks massacred at Srebrenica in July 1995, which was judicially declared an act of genocide.

There is zero growth among Myanmar’s largest Muslim population within their own ancestral homeland of Rakhine. Quite the contrary, chronic waves of violent mass deportation via genocidal rape and slaughter and demolition and burning of Muslim villages since 1978 have more than halved the country’s largest pocket of Muslims – ethnically Rohingya – in Western Myanmar.

The remaining Rohingya Muslim population in Buthidaung township are in apartheid-like conditions, stricken with pervasive and constant fear of being slaughtered in the next round of Myanmar’s state-directed mass atrocities — like the ones the world watched on Facebook and Twitter in 2017 — or killed in the current crossfires between the (Buddhist) Arakan Army and Myanmar government troops.

Based on my first-hand professional experience of running numerous sessions on racism sensitivity and awareness to groups of Myanmar’s opinion-makers including nuns, monks, journalists and rights activists, I have learned one sordid thing: facts do not puncture racism or change racist minds. Suu Kyi is no exception.

One typically hears the lame explanation that Suu Kyi has no control over the Burmese military, hence her studied silence regarding the latter’s misdeeds.

Her crimes are no longer confined to her refusal to condemn her “father’s army”, or “the crime of omission” as the UN fact-finding mission’s 444-page report (released on 18 September 2018) states. Nor are they merely her widely repeated denials of Myanmar’s “ethnic cleaning” as she had done most infamously on BBC and Channel News Asia.

As a matter of fact, Myanmar state counsellor is proving herself to be a wilful accomplice in the racially motivated atrocity crimes that the armed forces which her father founded under Japan’s fascist patronage.

Modern world history since Hitler’s mass-murderous days is full of populist regimes that come to power through ballot boxes, mobilizing a majoritarian racism of the electorates at the expenses of religious, ethnic, and racial minorities. Myanmar’s current transition under Suu Kyi’s leadership is not toward an inclusive, democratic society nor a liberal democracy; rather, it is toward a Buddhist nationalist, exclusionary political system where Muslims and other ethnic minorities are demonized and rendered without rights or state’s protection.

In light of these developments, the United States and the European Union should seriously review their policies of ostensibly supporting ‘the fragile transition” with Suu Kyi as the only capable and popular midwife for a Burmese democracy. The Lady, or the West’s “Democracy Queen” – as UN Special Rapporteur on the human rights situation in Myanmar Yanghee Lee put it to UK’s Channel Four News in 2018 – has been actively engaged in the articulation, justification and propagation of a venomous worldview which qualifies as “far right”, instead of promoting and defending civil liberties, press freedom, human rights and minority protection of all peoples and communities of faith within Myanmar.

Suu Kyi is Myanmar’s Marine Le Pen, not simply a pragmatic politician trying to juggle the demands, priorities and expectations placed on her leadership in a fragile transition. The sooner the world comes to terms with Suu Kyi’s metamorphosis the better for the Burmese activists who are engaged in community-level efforts to build an anti-racist, inclusive and democratic society.

*The author is a coordinator of the Free Rohingya Coalition and co-author, with Natalie Brinham, of Essays on Myanmar Genocide.