Sri Lanka: How the UN Failed Tamil Civilians in 2009

And how the legacy of this failure is still endangering lives in Sri Lanka and beyond. 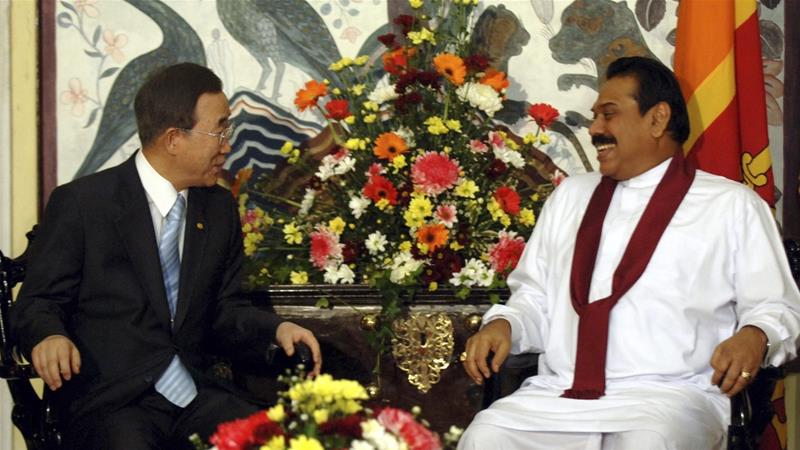 UN Secretary-General Ban Ki-Moon speaks to Sri Lankan President Mahinda Rajapaksa at the presidential residence in Kandy on May 23, 2009.  [Reuters]

18 May 2019 – Today, May 18, 2019, marks one decade since the armed conflict in Sri Lanka came to a brutal end. As we remember the victims of the war, it is important not to forget that those who were responsible for protecting them – the international community and institutions – failed miserably and their failure continues to cause more suffering today in Sri Lanka and elsewhere.

In particular, the United Nations – the institution tasked with maintaining “international peace and security” – not only did not make a real effort to save Tamil civilians from the carnage that unfolded in the months leading up to the end of the war, but to this day is unable to secure the implementation of a proper mechanism of accountability for the mass atrocities committed during the armed conflict.

The UN’s failure to act along with the lack of political will in the international community to take action has given the government of Sri Lanka free rein and allowed it flaunt post-war obligations to ensure justice and reconciliation.

Failing to act, failing to protect

Prior to the final stage of the war, the Sri Lankan government compelled international humanitarian organisations, the UN included, to leave the war zone. Then it took the opportunity of the absence of international oversight to launch a merciless campaign against Tamil civilians.

The government started reporting civilian population estimates far below the actual number in order to limit the entry of humanitarian aid. It restricted humanitarian deliveries in various ways and would fail to ensure secure passage for humanitarian convoys. Thousands of civilians were reported to have died due to inadequate medical care and lack of food.

In addition to limiting humanitarian aid with deadly consequences, the Sri Lankan government also did not prevent the army from directly bombarding civilian areas. It encouraged civilians to move to so-called “no fire zones” which were then shelled repeatedly. Hospitals were also targeted at least 30 times within a five-month period in deadly aerial and shelling attacks. Civilians were allegedly prevented from fleeing the fighting both by Tamil fighters and government forces.

In February 2009, amid the government’s deadly offensive, a senior UN staff member visited Sri Lanka, according to an official UN report which did not name him. He was “very seized” by the growing number of civilian casualties and immediately reported back to his superiors, saying “we would be complicit if we do not act on it.”

Yet, the UN failed to act.

In fact, UN staffers not only stopped counting casualties several days before the mass slaughter of civilians which culminated in the declaration of the end of the war, but also continued to issue statements supporting the government narrative and presenting the Tamil Tigers as equally responsible for the carnage, despite the overwhelming evidence on the ground that the Sri Lankan army was single-handedly committing mass atrocities.

Ten years on, there is still no accurate death toll due to the absence of a thorough and credible investigation process. While the UN has reported between 40,000 and 70,000 dead, other estimates put the number much higher – at 140,000.

Just five days after the end of the war, then-UN Secretary-General Ban Ki-moon visited Sri Lanka and called for an accountability process to be put into place in order to address violations of international humanitarian and human rights law.

But the UN failed to see this through as well.

Although the Sri Lankan government co-sponsored a number of UN Human Rights Council resolutions which call for the promotion of reconciliation, accountability and human rights, it has not delivered on the commitment it made to the UN chief to ensure justice is served for the victims of the violence.

It continues to praise alleged war criminals as war heroes, promoting some of them to top positions within civilian and military institutions. To date, there have been no trials of people suspected of having committed war crimes and a culture of impunity continues to prevail in the country’s north and east.

A 2015 report by the Office of the UN High Commissioner for Human Rights on Sri Lanka noted that “many of the structures responsible for the violations and crimes remain in place”.

Meanwhile, the intimidation, surveillance and harassment of Tamil war survivors continue. The Tamil community is still denied the right to collective remembrance of the dead under false claims that such an act would endanger national security. State Minister of Defence Ruwan Wijewardena has even said that commemorating or mourning the war dead was an attempt to discredit the “war heroes” of the Sri Lankan armed forces.

The persistent lack of genuine political and moral will to address the grievances of the Tamil population demonstrates that no domestic or hybrid mechanism would ever deliver justice to victims and survivors, and only an international independent investigation can hold perpetrators accountable.

When a Panel of Experts report on Sri Lanka was released in 2011, Navi Pillay, the then-UN High Commissioner for Human Rights, said that the “disturbing new information” in the report “will shock the conscience of the international community into finally taking serious action”.

Now, eight years later, it appears that the conscience of the international community has still not been shaken into action, neither in Sri Lanka nor elsewhere. The fact that war criminals get away with the mass atrocities they commit has emboldened many others to wage war on civilians without the fear of ever being held accountable.

Six years later the Myanmar military launched yet another brutal operation of ethnic cleansing against the Rohingya people which resulted in the deaths and injury of tens of thousands and the exodus of 700,000 civilians to neighbouring countries.

These are just two examples of many which have taken place because the UN and the international community have failed to act in places like Sri Lanka.

This failure to act is not only preventing true reconciliation but also endangering civilian lives in the country and across the world.

Nirmanusan Balasundaram is an independent exiled journalist and international human rights activist. He is also closely associated with INGO, NGO’s, and Civil Society movements in Sri Lanka as well as internationally and is currently working as an independent consultant on peace building and conflict resolution. He holds an MA in Peace and Conflict Studies from the European University Center for Peace Studies in Austria.