The World Bank Is Rewarding Ethnic Cleansing in Myanmar 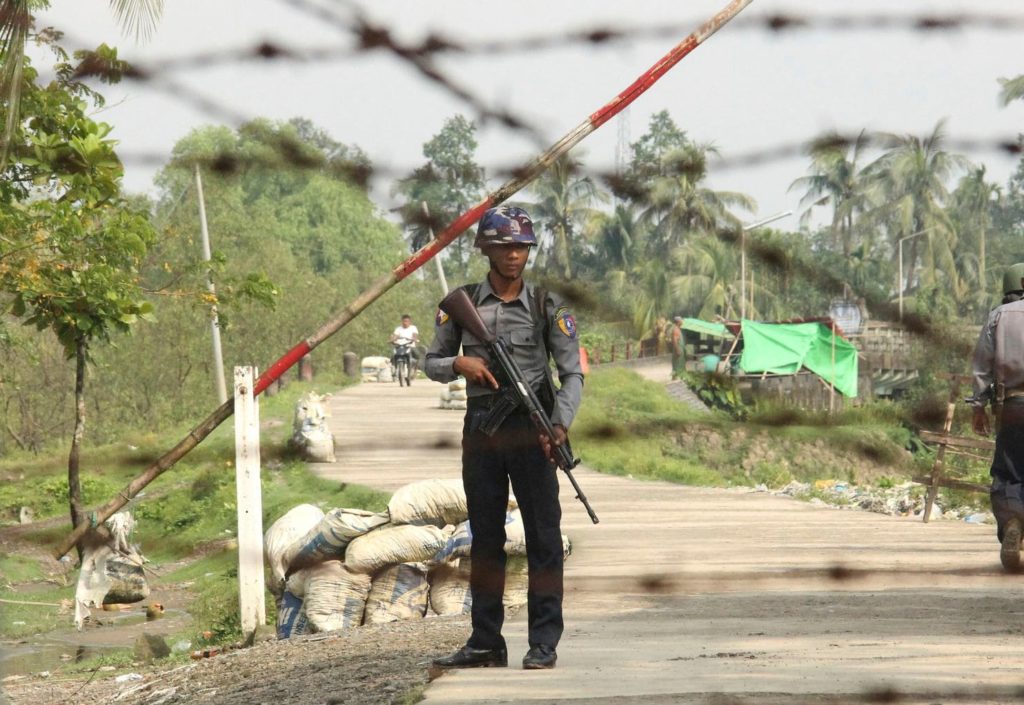 A police officer stands guard at a checkpoint in Shwe Zar village in the northern Rakhine state of Myanmar on Sept. 6, 2017. (AP)

30 May 2019 – This month, the World Bank published a proposal for a $100 million development project in Rakhine state, the region of western Myanmar that recently saw the systematic ethnic cleansing of the Rohingya Muslim community. The aim of the project is to fund credit for small businesses in the region and boost economic development.

Aiding local economic development in a conflict-torn region sounds like a good idea on paper. But as many nongovernmental groups involved in the region point out, the World Bank is pushing ahead with its plans even though the humanitarian crisis in Rakhine is not even close to resolution.

About 1 million Rohingya remain in refugee camps over the border in Bangladesh — almost the entire pre-2017 Rohingya population of western Myanmar. The international community has done nothing to hold individuals in the Myanmar state apparatus to account for the ethnic cleansing of the past two years. And the government of Myanmar has done nothing to implement civil and legal protections for Rohingya individuals so that they can return to the country of their birth.

This World Bank funding project also attaches no conditions on Myanmar in order to access this funding. To spell it out: The World Bank is funding a state that has carried out ethnic cleansing in just the past 24 months, with no strings attached.

The armed forces of the federal state of Myanmar and the local police have burned down Rohingya villages and bulldozed Rohingya mosques, and then proceeded to reallocate lands and cattle to local Buddhist-nationalist supporters. And now the World Bank is helping to fund the redevelopment of the region for the benefit of the occupying settlers.

To be sure, $100 million for a development project is not a large amount. But the signal this sends is catastrophic. This project demonstrates that the international community and the institutional order of the West simply do not care about crimes against humanity.

We should be pursuing those who orchestrated the “clearing operations” in international criminal courts. We should be directing much-needed funding to alleviating the conditions of the refugees in the overcrowded and undersupplied camps in Bangladesh. We should be using every avenue to pressure the government of Myanmar to grant full legal status and protections to the Rohingya and enable them to return to the lands of their birth.

Instead, we are rewarding the perpetrators and funding their efforts to appropriate the lands and redevelop them for their own purposes. This sets a dismal precedent for the rest of the West. So far, Western governments and companies have largely distanced themselves the Myanmar authorities and Aung San Suu Kyi, the country’s de facto leader, over the genocide of the Rohingya. But Western commercial interests remain keen on investing in Myanmar, especially because of its rich natural resources. And this unilateral move by the World Bank may act as a starting pistol for a rush of Western companies looking to cut deals and get a foothold in the country’s economy.

This would add insult to injury from the humanitarian point of view. Most of those resources Western companies are so hungry for have long been under the control of the country’s military establishment — the same corrupt elite who have governed Myanmar for decades, who have created a “hostile environment” for the Rohingya since the early days of the country’s military dictatorship, and who instigated and carried out the 2017 “clearing operations.”

Yet there are ways for the World Bank to fix its initiative. It could, for example, make this funding conditional on Myanmar allowing a United Nations fact-finding mission on the ground in Rakhine — something that, though long overdue, is still being blocked by the government. Or the bank’s planners could take steps to ensure that the funding is divided equally between the few Rohingya Muslims who still remain in the region and the ethnic Rakhine Buddhists, while prohibiting its use for the development of Buddhist infrastructure in vacated Rohingya lands.

This project could be used by the international community as leverage to push Myanmar toward a sustainable solution the Rohingya crisis. And it should be used to that end. As things stand, however, we are proposing to reward the perpetrators of crimes against humanity.

Azeem Ibrahim is a director at the Center for Global Policy and author of The Rohingyas: Inside Myanmar’s Genocide.