10 Jul 2019 — News advisory on antinuclear protests that Voices for Creative Nonviolence co-coordinator Brian Terrell is currently attending in Büchel, Germany.  Included is the “Treaty Enforcement Order” presented to Büchel Air Base today and a photograph of the eleven activists’ entry to the base.

Eleven international peace activists entered the Büchel Air Base southwest of Frankfurt early this morning to deliver what they called a “Treaty Enforcement Order” declaring that the sharing of US nuclear weapons at the base is a “criminal conspiracy to commit war crimes.”

Upon entering the base’s main gate with a printed “cease and desist order,” they insisted on seeing the base commander to deliver the order in person.

“We refuse to be complicit in this crime,” said Brian Terrell of Voices for Creative Nonviolence in Chicago, Illinois. “We call for the nuclear bombs to be returned to the US immediately. The Germans want these nuclear weapons out of Germany, and so do we.”

The group included people from Germany, The Netherlands, the United Kingdom, and the United States. All eleven were detained by military and civilian authorities and were released after providing identification. This is the third year in a row that a delegation of US peace activists has joined Europeans and others in protesting the US nuclear weapons at Büchel. The local group Nonviolent Action for Abolition of Nuclear Weapons (GAAA) convenes the International Action Week, demanding permanent ouster of the US nuclear weapons, cancellation of plans to replace today’s B61s with new hydrogen bombs, and Germany’s ratification of the 2017 Treaty on the Prohibition of Nuclear Weapons.

“Delivery of the ‘Cease and Desist Order’ is an act of crime prevention,” said John LaForge, of the US peace group Nukewatch and coordinator of the US delegation. “The authorities think the entry is a matter of trespass. But these nuclear bomb threats violate the UN Charter, the Treaty on Nonproliferation of Nuclear Weapons, and the 2017 Treaty on the Prohibition of Nuclear Weapons.” he said, adding, “Interrupting government criminality is a duty of responsible citizenship.”The activists included: (from the United States) Susan Crane, Richard Bishop, Andrew Lanier, Jr., Brian Terrell, Ralph Hutchison, and Dennis DuVall; (from the UK) Richard Barnard; (from The Netherlands) Margriet Bos, and Susan van der Hijden; and (from Germany) Dietrich Gerstner, and Birke Kleinwächter.

Susan van der Hijden of Amsterdam, who is just back from the US where she visited the Kansas City, Kansas site of a factory working on parts of the new replacement bomb, known as the B61-12. “The planning and training to use the US H-bombs that goes on at Büchel cannot be legal, because organizing mass destruction has been a criminal act since the Nuremberg Trials after WWII,” van der Hijden said. 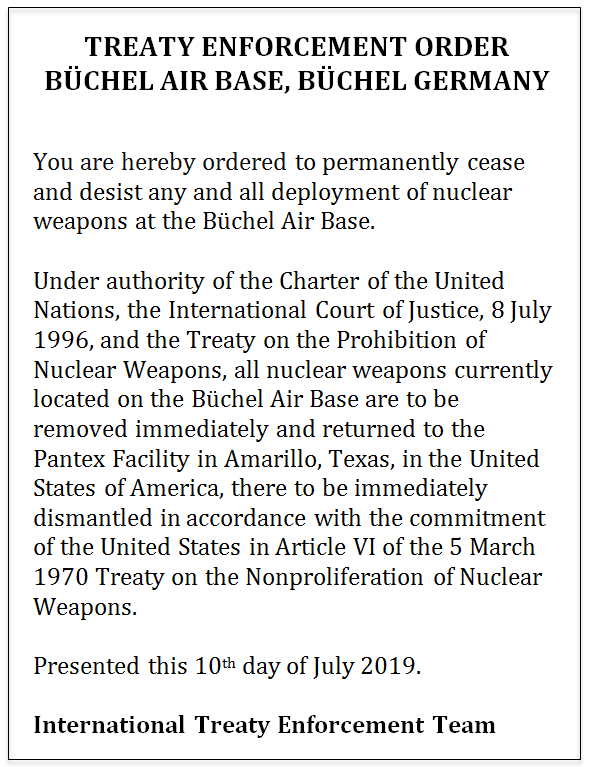 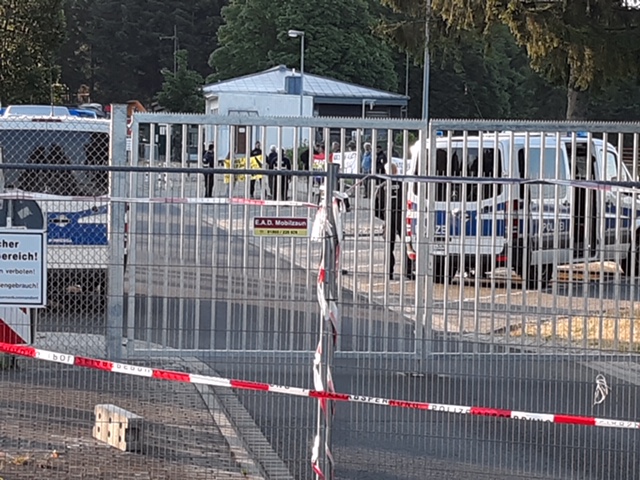 Anticopyright: Editorials and articles originated on TMS may be freely reprinted, disseminated, translated and used as background material, provided an acknowledgement and link to the source, TMS: Activists Walk “Cease and Desist” Order into Nuclear Weapons Base in Germany, is included. Thank you.