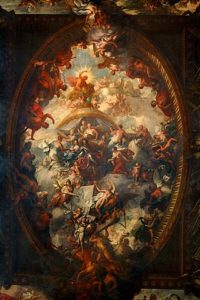 Central oval of James Thornhill’s (1714) “Triumph of Peace and Liberty over Tyranny” on the lower hall ceiling of the Painted Hall at the Old Royal Naval College in Greenwich, England; photographed by Roger Stevens in 2009. In the public domain.

The first step in solving a problem is recognizing that there is one; and though prophets and sages, assassinated statesmen and pacifist activists have long issued warnings about the urgent need for sane and pragmatic reform, their voices have been muted by a perpetual blizzard of epistemological confetti and jingoistic sloganeering aimed at the citizen populace by sophistic politicians and mainstream media technocrats serving the imperial needs of the richest of the rich.

“The truth is so often the opposite of what we are told that we can no longer turn our heads around far enough to see it.” Noam Chomsky adds the necessary twist: “The problem is not that people don’t know; it’s that they don’t know they don’t know.” Hence the enduring potency of Marx’s maxim: “The demand to abandon illusions about our condition is a demand to abandon the conditions which require illusion.”

America repeats the unlearned lessons of history.  Founded on noble ideals undermined by genocide and slavery, America wraps itself in a cloak of virtue and goes abroad in search of monsters to destroy, not knowing she is destroying herself.  Men at the helm of the ship of state, swollen with greed and skilled at sophistry, steer civilization toward the abyss.  Only the blind can fail to see The Statue of Liberty weeping for another lost chance for human history to be something other than ignorance, violence, and ignoble self-betrayal. With all too few individual exceptions, the difference between the Democratic Party and the Republican Party is the difference between neurotic and psychotic.

Howard Zinn, noting that the problem is not civil disobedience, but, rather, all too pervasive obedience, declared:

“We cannot solve our problems with the same thinking we used when we created them.”  He said further: “Money only appeals to selfishness and always irresistibly tempts its owner to abuse it.  Can anyone imagine Moses, Jesus, or Gandhi with the moneybags of Carnegie?”

James Thurber once offered the parable of a man standing on his cabin porch watching a forest being cut down to provide timber for the building of an asylum in which to house people driven insane by the cutting down of forests. 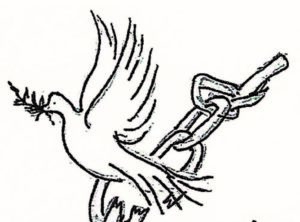 10 Jul 2019 – The vast majority of American citizens have been conditioned to think that democracy and capitalism are synonymous, and that socialism equals fascism.  To which we can apply Mark Twain’s observation:

“Loyalty to petrified opinion never yet broke a chain or freed a human soul.”

“I think our society is run by insane people for insane objectives.  I think we’re being run by maniacs for maniacal ends.  I think they’re all insane.  But I am liable to be put away as insane for expressing that.  That’s what is insane about it.”

“I don’t know what word in the English language … applies to people who are willing to sacrifice the literal existence of organized human life so they can put a few more dollars into highly stuffed pockets.  The word ‘evil’ doesn’t even begin to approach it.”

Plato said in The Phaedo that

“all wars are fought for the accumulation of wealth.”

Today, the American landscape is littered with statues of generals on stallions, while memorials to prophetic peacemakers are barely to be found.

War memorials abound, but where are the institutes for the study and practice of peace that could hold the promise of a better future?

Imperialism is the most potent and nefarious force in human history, and it haunts us today.  America has nearly a thousand military bases scattered across the globe, mostly in countries that don’t want them there.  New York calls itself “The Empire State;” and the Empire State Building on Fifth Avenue in New York City remains a popular tourist attraction, its very name unrecognized as a paean to the unrelenting violence, death and destruction of mega-wealth’s imperial ambitions.

Decade after decade, American students say history is the most boring subject in school.  Perhaps this would change if every history textbook began with Mark Twain’s observation that “America’s flag should be a skull-and-crossbones,” and if parents and students demanded to know why he said that, and teachers were sufficiently well-informed to provide an honest answer.

The only sane and civil alternative to global capitalism gone amok is democratic ecosocialism, wherein citizens are keenly attuned to the lessons of history, respect and revere the biosphere, have ample time to continue their self-education, and are well-schooled in the critical thinking skills necessary to detect and refute sophistic speechifying.

A just society is committed to the well-being of all, and is therefore committed to egalitarian economics, universal healthcare, voluntary simplicity, free lifelong educational opportunity, preservation of natural resources, and a modest and well-tamed military overseen by “guardians” committed to peace.

12 Jul 2019 – We are free to become free.  This is the lesson taught by Socrates.  It is also the essence of Buddhism.  The word “Buddha” means “awake.”  Awakening, as Plato would say, is recollecting the sanity we were born with.

“Become who you are.”

We are inextricable strands in the holistic web of being and becoming.  Said the poet Byron:

“Are not the mountains, waves, and skies, a part of me and of my soul, as I of them?”

“In order to acquire learning, we must first shake ourselves free of it.”

To shake ourselves free from chains of illusion, William Blake –implicitly evoking Plato’s allegory of the cave – urges a cleansing of “the doors of perception.”  This has long been the virtue of Zen; and it is a sign of hope for human survival that the “mindfulness” movement is today finding widespread resonance in what Marshall McLuhan called “the global village.”

To give birth to a government by and for the people, we need a concerted effort, both individual and collective, to shatter the illusion that democracy and capitalism are synonymous.  The two terms desperately need to be separated: analyzed and evaluated on their own merits, and put together again only in a modest, enlightened, socially pragmatic fashion, in conjunction with – and this too is a crucial point – a radical dismemberment of the specious and misleading caricature of Marxist politics that has so long reigned supreme in the American psyche, placed there in service to the captains of capital.

Greta Thunberg is a Swedish teenager.  Imbued with ecological despair and courage of conscience, she is leading a global youth revolt against the status quo.  As the climate crisis intensifies, the glaciers melt, polar bears die, and the earth burns, she calls on politicians “to act as if your house is on fire.”  She was recently honored by Tenzin Gyatso, the fourteenth Dalai Lama, as a major world peacemaker and a voice for sanity and virtue.

John F. Kennedy, Martin Luther King, Robert F. Kennedy, John Lennon – the brightest lights of a generation shot out to assure the triumph of the corporate counter-revolution against The Spirit of The Sixties.  Giving peace a chance would not be an option. Yet, despite the victory of the mega-wealthy and the war-machines during the tragic course of the last half-century, there is a global undercurrent of awakening that daily increases in momentum.  More and more people are realizing that it is better to swim against the current than to be swept over the cliff.

If philosophy is the journey from the love of wisdom to the wisdom of love, so too is our collective journey to peace, justice, and survival.

A graduate of Dickinson College, Stefan Schindler taught philosophy, psychology, education, and religion for 40 years at institutions of higher learning, including The University of Pennsylvania, La Salle University, Berkley College of Music, The Boston Conservatory of Music, Dance and Theater, and the Boston and Brookline Centers for Adult Education.  For six years, he also taught language and computer skills in a state-sponsored program for the unemployed in Philadelphia, Pennsylvania. Co-founder of The National Registry for Conscientious Objection, a Woodrow Wilson Fellow, a recipient of The Boston Baha’i Peace Award, and a Trustee of The Life Experience School and Peace Abbey, Dr. Schindler received his Ph.D. in Philosophy from Boston College (on Freud, Sartre, Hegel, and Jung), worked one summer in a nature preserve, lived in a Zen temple for a year, did the pilot’s voice in a claymation video of St. Exupéry’s “The Little Prince,” acted in “Who’s Afraid of Virginia Woolf,” and performed as musical poet in Philadelphia, Boston, and New York City. He wrote The Peace Abbey Courage of Conscience Awards for Howard Zinn and John Lennon.  He is now retired and living in Salem, Massachusetts. His books include The Tao of Socrates and America’s Indochina Holocaust.  His forthcoming book is titled Buddha’s Political Philosophy.