It is a matter of scholarly debate whether to change the term Taoism (or Taoist) into Daoism/Daoist to conform to pinyin’s rules. Since Taoism is a coined, anglicized word, our choice is not to put it in the pinyin, in spite of the fact that we have changed “the Tao,” the way, to “the Dao.” The current literature on China includes both spellings. It remains for the future to determine which will predominate. 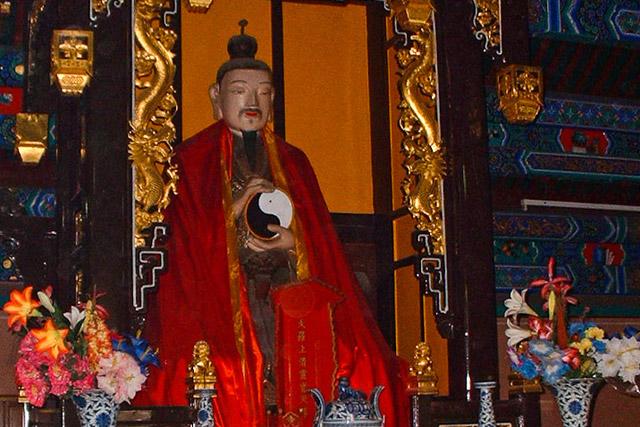 Humans model themselves on earth,
Earth on heaven,
Heaven on the Way,
And the way on that which is naturally so.
—Laozi, excerpted from Daodejing #251

A noted Chinese anthropologist has written that Chinese religion “mirrors the social landscape of its adherents. There are as many meanings as there are vantage points.” The same could be said of the diverse tradition we call Daoism. Daoism was understood and practiced in many ways, each reflecting the historical, social, or personal situation of its adherents. While this diversity may confuse and perplex the outside observer, it accounts for the resilience of Daoism in China. Daoism was adaptable, evolving to fill spiritual gaps created by the vagaries of life.

Daoism can also be called “the other way.” During its entire history, it has coexisted alongside the Confucian tradition, which served as the ethical and religious basis of the institutions and arrangements of the Chinese empire. Daoism, while not radically subversive, offered a range of alternatives to the Confucian way of life and point of view. These alternatives, however, were not mutually exclusive. For the vast majority of Chinese, there was no question of choosing between Confucianism and Daoism. Except for a few straight laced Confucians and a few pious Daoists, the Chinese man or woman practiced both—either at different phases of life or as different sides of personality and taste.

Classical Daoist philosophy–formulated by Laozi (the Old Master, 5th century B.C.E.?), the anonymous editor of the Daodejing (Classic of the Way and its Power), and Zhuangzi (3rd century B.C.E.),–was an interpretation and development of an ancient nameless tradition of nature worship and divination.

Laozi and Zhuangzi, living at a time of social disorder and great religious skepticism (see article on Confucianism), developed the notion of the Dao (Dao—way, or path) as the origin of all creation and the force—unknowable in its essence but observable in its manifestations—that lies behind the functionings and changes of the natural world. They saw in Dao and nature the basis of a spiritual approach to living. This, they believed, was the answer to the burning issue of the day: what is the basis of a stable, unified, and enduring social order? The order and harmony of nature, they said, was far more stable and enduring than either the power of the state or the civilized institutions constructed by human learning. Healthy human life could flourish only in accord with Dao—nature, simplicity, a free-and-easy approach to life. The early Daoists taught the art of living and surviving by conforming to the natural way of things; they called their approach to action wuwei (literally, “no-action”), action modeled on nature. Their sages were wise, but not in the way the Confucian teacher was wise—learned and a moral paragon. Zhuangzi’s sages were often artisans—butchers or woodcarvers. The lowly artisans understood the secret of art and the art of living. To be skillful and creative, they had to have inner spiritual concentration and put aside concern with externals, such as monetary rewards, fame, and praise. Art, like life, followed the creative path of nature, not the values of human society.>

Throughout Chinese history, people weary of social activism and aware of the fragility of human achievements would retire from the world and turn to nature. They might retreat to a countryside or mountain setting to commune with natural beauty. They would compose or recite poetry about nature, or paint a picture of the scene, attempting to capture the creative forces at the center of nature’s vitality. They might share their outing with friends or more rarely—a spouse, drinking a bit of wine, and enjoying the autumn leaves or the moon.

Chinese utopian writings also often bore a Daoist stamp. Dao Qian’s (T’ao Ch’ien, 372?-427? C.E.) famous “Peach Blossom Spring” told the story of a fisherman who discovered by chance an idyllic community of Chinese who centuries earlier had fled a war-torn land, and had since lived in perfect simplicity, harmony, and peace, obliviously unaware of the turmoil of history beyond their grove. Although these utopian surged him to stay, the fisherman left to share his discovery with friends and a local official. He could never find his way back. He did not understand that this ideal world was to be found not by following an external path, but a spiritual path; it was a state of mind, an attitude that comprised the utopia.

If Daoist ideas and images inspired in the Chinese a love of nature and an occasional retreat to it from the cares of the world to rest and heal, it also inspired an intense affirmation of life: physical life –health, well-being, vitality, longevity, and even immortality. Laozi and Zhuangzi had reinterpreted the ancient nature worship and esoteric arts, but they crept back into the tradition as ways of using knowledge of the Dao to enhance and prolong life. Some Daoists searched for “isles of the immortals,” or for herbs or chemical compounds that could ensure immortality. More often, Daoists were interested in health and vitality; they experimented with herbal medicine and pharmacology, greatly advancing these arts; they developed principles of macrobiotic cooking and other healthy diets; they developed systems of gymnastics and massage to keep the body strong and youthful. Daoists were supporters both of magic and of proto-science; they were the element of Chinese culture most interested in the study of and experiments with nature.

Some Daoists believed that spirits pervaded nature (both the natural world and the internal world within the human body). Theologically, these myriad spirits were simply many manifestations of the one Dao, which could not be represented as an image or a particular thing. As the Daoist pantheon developed, it came to mirror the imperial bureaucracy in heaven and hell. The head of the heavenly bureaucracy was the jade Emperor, who governed spirits assigned to oversee the workings of the natural world and the administration of moral justice. The gods in heaven acted like and were treated like the officials in the world of men; worshipping the gods was a kind of rehearsal of attitudes toward secular authorities. On the other hand, the demons and ghosts of hell acted like and were treated like the bullies, outlaws, and threatening strangers in the real world; they were bribed by the people and were ritually arrested by the martial forces of the spirit officials.5 The common people, who after all had little influence with their earthly rulers, sought by worshipping spirits to keep troubles at bay and ensure the blessings of health, wealth, and longevity.

The initiated Daoist priest saw the many gods as manifestations of the one Dao. He had been ritually trained to know the names, ranks, and powers of important spirits, and to ritually direct them through meditation and visualization. In his meditations, he harmonized and reunited them into their unity with the one Dao. However, only the educated believers knew anything of the complex theological system of the priest. Thus communal rituals had two levels: (a) a priestly level, which was guided by the priest’s meditation and observed by major patrons, who were educated laymen; and (b) a public and dramatic ritual, usually performed by lower ranked Daoist assistants, which was theatrical in form. It conveyed the meaning through visible actions such as climbing sword ladders, or lighting and floating lanterns. The same ritual had a subtle metaphysical-mystical structure for the theologians, and a visible dramatic structure for the lay audience.

Daoism was also an important motif in fiction, theater, and folk tales. Local eccentrics who did not care for wealth and position were often seen as “Daoist” because they spurned Confucian values and rewards. In fiction Daoists were often eccentrics; they also had magical or prophetic powers, which symbolized their spiritual attainment. They healed, restored youth and vitality, predicted the future, or read men’s souls. They were also depicted as the stewards of a system of moral retribution; the Daoist gods in heaven and hell exacted strict punishments for wrongdoing, and would let no sinner off the hook. On the one hand, then, they were non-conformists who embodied different values and life styles; on the other, their strict moral retribution reinforced the values of the society. Daoism was “the other way,” but it did not threaten the moral consensus. It was, perhaps, a kind of safety valve to escape the pressures of society, or at least a complementary channel for alternative views and values.

Chinese communists see Daoism as fatalistic and passive, a detriment to socialist reconstruction. The People’s Republic has kept alive some practical arts, such as the use of traditional herbal medicines, which have longstanding links with Daoism. In a larger sense, since Daoism functioned in imperial China as a retreat and withdrawal from the struggles of the political arena, one might say that in a very general way the current relaxation of political pressure in reaction against the excesses of the Gang of Four represents a Daoistic phase of Chinese Maoism.

This article and the one on Confucianism were written during the Indiana Religion Studies Project Institute for Teaching about Religion in the Secondary Social Studies Curriculum. The drafts were critiqued by the social studies teachers who attended with an eye to supplementing and correcting the information in textbooks and other materials used by teachers. The two articles should read as a pair; they complement each other in much the same way these two religions complemented each other throughout Chinese history.