“A national culture is impossible without the individual creative artist; the individual artist is important and unintelligible except in his relationship to his national culture.  Where either tries to do without the other, degeneracy ensues nationally and individually…The true artist is the true patriot, speaking the language of eternity but in the vernacular of his own time and place…Where art does not rise from authentic springs, but is piped from distances by subterranean ways, it becomes troubled, muddied, and at best only reaches a dull mediocrity.  But art that embodies the creative impulse of the universe, with high vision and deep emotion, in its own time and place and way, will by the force of its authenticity pass beyond these limits into universal appreciation.” 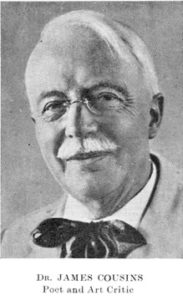 James Cousins was the Irish poet who with A.E. (George Russell) and William Butler Yeats played a major role in the Irish literary revival in the 1890s-1900s. Later he went to India as literary editor for Annie Besant’s newspaper New India and then was one of the organisers of the State University of Travancore, where he headed the Department of Fine Arts and English Studies.  Thus he was in a privileged position to study the interaction between Western and Indian thought with a critical eye.  Cousins was much appreciated by the Indian philosopher and social activist Sri Aurobindo who was an attentive observer of Western evaluations of Indian culture.

Since Ireland was still a colony of Great Britain in Cousins’ formative years, he could sympathise with the need of not being dominated by a foreign culture and yet using the instruments needed to be universal.  Ireland lived under a subtle form of colonialism rather than the Empire in Africa and India where domination was made more obvious by the distance from the center of power and the racial differences. He wrote in English and not the Gaelic (Celtic) which some Irish nationalists wanted to make a “national language” though it was understood by only a small minority.

His A Study in Synthesis is a rich and complex study of the ways in which intuition, emotion, cognition, and action structure human life. He places great importance on the power of intuition as the way the individual feels the push and pressure of the Cosmos.  The eye of the Cosmos looks over the activities of the individual psyche.  As Cousins writes,

“From the total push and pressure of the Cosmos come the impulses of life that manifest themselves through desires (emotions) counsel (cognition) and works (action)…In other terms, the intuition flows through thoughts as truth, through feeling as beauty, through action as goodness.”

This framework Cousins translates into Indian terms as intuition which is nameless and before all — the Para-Brahman, or what in Chinese thought is the Tao.  It manifests itself  in the created world as cognition, symbolized as Shiva, the Lord of the Cosmic Dance, in the emotional world as Vishnu, and in the world of action as Brahma — the three aspects of the Hindu trinity. This synthesis of intuition, cognition, emotion and action gives us the philosophical experience, a mental response to reality, warmed by emotion and vivified by life.

The arts are the most direct representation of synthesis.  The arts are both an expression of a time and place and yet some deep aesthetic sense in each individual allows him to be moved by great art across the divides of time and place.  Thus a consideration of the arts is an appropriate form of dialogue out of which policy considerations can be drawn.

Art has never been just an individual achievement but has always had a social aspect.  The painting and sculpture of temple and church was to be contemplated by all.  Rulers and the wealthy have been patrons of the arts while often restricting creativity to their individual tastes.  Modern governments have followed the pattern and can play both positive and negative roles.  Today, the mass media can open doors to true creative experience as well as playing to the lowest mass attitudes.

Thus, we are at a time of particular importance for a world-wide discussion of the role of the arts, of the ways in which we can learn from each other.  We can discuss the ways in which art is related to spirit and the higher dimensions of being.  Rabindranath Tagore stressed that art is a means to satisfy the hunger of the soul for reality writing,

“Our soul has her hunger for this immediateness of realisation, whereby she is enabled to know herself.  The love, the contemplation, the vision that alone can satisfy this hunger finds its place in Literature, in Art.”

Anticopyright: Editorials and articles originated on TMS may be freely reprinted, disseminated, translated and used as background material, provided an acknowledgement and link to the source, TMS: James Cousins (22 Jul 1873 – 20 Feb 1956): An Effort of Synthesis, is included. Thank you.