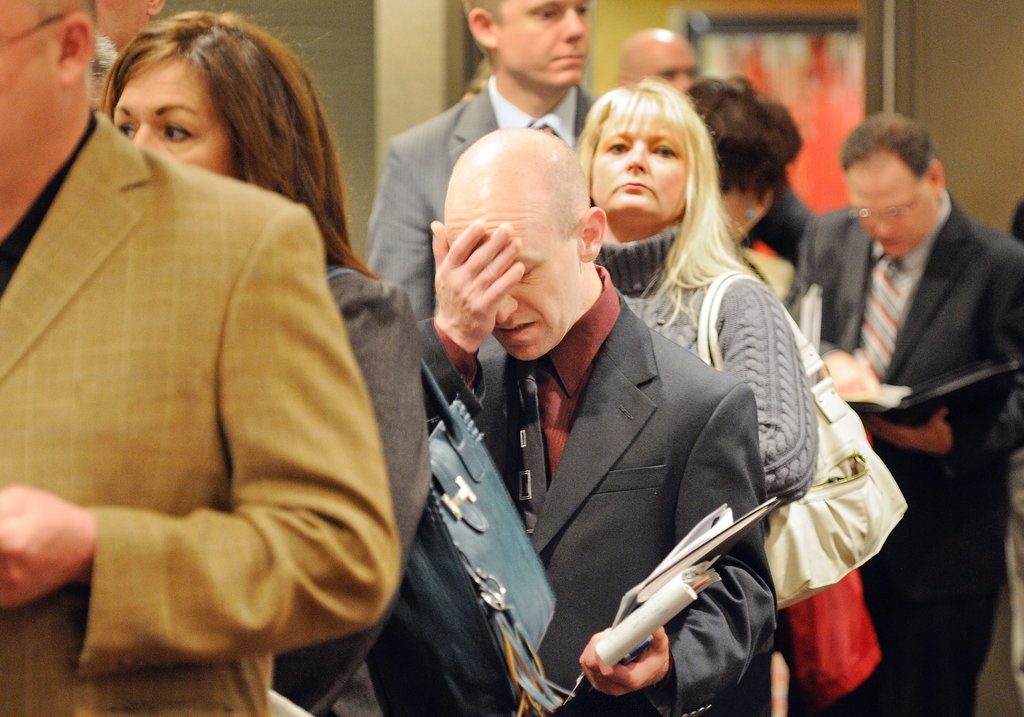 People waiting in line at a job fair in Bloomington, Minn. in 2011. Craig Lassig for The New York Times

22 Jun 2018 – In a couple of days I’m going to be participating in an Economic Policy Institute conference on “excessive wealth disorder” — the problems and dangers created by extreme concentration of income and wealth at the top. I’ve been asked to give a short talk at the beginning of the conference, focusing on the political and policy distortions high inequality creates, and I’ve been trying to put my thoughts in order. So I thought I might as well write up those thoughts for broader dissemination.

While popular discourse has concentrated on the “1 percent,” what’s really at issue here is the role of the 0.1 percent, or maybe the 0.01 percent — the truly wealthy, not the “$400,000 a year working Wall Street stiff” memorably ridiculed in the movie Wall Street. This is a really tiny group of people, but one that exerts huge influence over policy.

Where does this influence come from? People often talk about campaign contributions, but those are only one channel. In fact, I’d identify at least four ways in which the financial resources of the 0.1 percent distort policy priorities:

Of these, I want to focus on item (4), not because it’s necessarily the most important — as I said, I suspect that raw corruption is a bigger deal than most of us can imagine — but because it’s something I think I know about. In particular, I want to focus on a particular example that for me and others was a kind of radicalizing moment, a demonstration that extreme wealth really has degraded the ability of our political system to deal with real problems.

The example I have in mind was the extraordinary shift in conventional wisdom and policy priorities that took place in 2010-2011, away from placing priority on reducing the huge suffering still taking place in the aftermath of the 2008 financial crisis, and toward action to avert the supposed risk of a debt crisis. This episode is receding into the past, but it was extraordinary and shocking at the time, and could all too easily be a precursor to politics in the near future.

Let’s talk first about the underlying economic circumstances. At the beginning of 2011, the U.S. unemployment rate was still 9 percent, and long-term unemployment in particular was at extraordinary levels, with more than 6 million Americans having been out of work for 6 months or more. It was an ugly economic situation, but its causes were no mystery. The bursting of the housing bubble, and the subsequent attempts of households to reduce their debt, had let to a severe shortfall of aggregate demand. Despite very low interest rates by historical standards, businesses weren’t willing to invest enough to take up the slack created by this household pullback.

Textbook economics offered very clear advice about what to do under these circumstances. This was exactly the kind of situation in which deficit spending helps the economy, by supplying the demand the private sector wasn’t. Unfortunately, the support provided by the American Recovery and Reinvestment Act — the Obama stimulus, which was inadequate but had at least cushioned the effects of the slump — peaked in mid-2010 and was in the process of falling off sharply. So the obvious, Economics 101 move would have been to implement another significant round of stimulus. After all, the federal government was still able to borrow long-term at near-zero real interest rates.

Somehow, however, over the course of 2010 a consensus emerged in the political and media worlds that in the face of 9 percent unemployment the two most important issues were … deficit reduction and “entitlement reform,” i.e. cuts in Social Security and Medicare. And I do mean consensus. As Ezra Klein noted, “the rules of reportorial neutrality don’t apply when it comes to the deficit.” He cited, for example, Mike Allen asking Alan Simpson and Erskine Bowles “whether they believed Obama would do ‘the right thing’ on entitlements — with ‘the right thing’ clearly meaning ‘cut entitlements.’”

So where did this consensus come from? To be fair, the general public has never bought into Keynesian economics; as far as I know, most voters, if asked, will always say that the budget deficit should be reduced. In November 1936, just after FDR’s reelection, Gallup asked voters whether the new administration should balance the budget; 65 percent said yes, only 28 percent no.

But voters tend to place a relatively low priority on deficits as compared with jobs and the economy. And they overwhelmingly favor spending more on health care and Social Security.

The rich, however, are different from you and me. In 2011 the political scientists Benjamin Page, Larry Bartels, and Jason Seawright managed to survey a group of wealthy individuals in the Chicago area. They found striking differences between this group’s policy priorities and those of the public at large. Budget deficits topped the list of problems they considered “very important,” with a third considering them the “most important” problem. While the respondents also expressed concern about unemployment and education, “they ranked a distant second and third among the concerns of wealthy Americans.”

So what was the origin of the conventional-wisdom consensus that emerged in 2010-2011 — a consensus so overwhelming that leading journalists abandoned the conventions of reportorial neutrality, and described austerity policies as the self-evident “right thing” for politicians to be doing? What happened, essentially, was that the political and media establishment internalized the preferences of the extremely wealthy.

Now, 2011 was an especially dramatic example of how this happens, but it wasn’t unique. In their recent book “Billionaires and Stealth Politics,” Page, Seawright, and Matthew Lacombe point out the enduring effects of plutocratic political influence on the Social Security debate: “Despite the strong support among most Americans for protecting and expanding Social Security benefits, for example, the intense, decades-long campaign to cut or privatize Social Security that was led by billionaire Pete Peterson and his wealthy allies appears to have played a part in thwarting any possibility of expanding Social Security benefits. Instead, the United States has repeatedly come close (even under Democratic Presidents Clinton and Obama) to actually cutting benefits as part of a bipartisan ‘grand bargain’ concerning the federal budget.”

And here’s the thing: While we don’t want to romanticize the wisdom of the common man, there’s absolutely no reason to believe that the policy preferences of the wealthy are based on any superior understanding of how the world works. On the contrary, the wealthy were obsessed with debt and uninterested in mass unemployment at a time when deficits weren’t a problem — were, indeed, part of the solution — while unemployment was.

And the widespread belief among the wealthy that we should raise the retirement age is based, literally, on failure to understand how the other half lives (or, actually, doesn’t). Yes, life expectancy at age 65 has gone up, but overwhelmingly for the upper part of the income distribution. Less affluent Americans, who are precisely the people who depend most on Social Security, have seen little rise in life expectancy, so there is no justification for forcing them to work longer.

Where do the preferences of the wealthy come from? You don’t have to be a vulgar Marxist to recognize a strong element of class interest. The push for austerity was clearly linked to a desire to shrink the tax-and-transfer state, which in all advanced countries, even America, is a significant force for redistribution away from the wealthy toward citizens with lower incomes.

You can see the true goals of austerity a couple of ways. First, by comparison with other advanced countries the U.S. has low taxes and low social spending, yet almost all the energy of self-proclaimed deficit hawks was expended on demands for reduced spending rather than increased taxes. Second, it’s striking how much less deficit hysteria we’re hearing now than we did seven years ago. The full-employment budget deficit now is about as large, as a share of GDP, as it was in early 2012, when unemployment was still above 8 percent. But this deficit, although far less justified by macroeconomic considerations, was created by tax cuts — and somehow the deficit hawks are fairly quiet.

No doubt many wealthy backers of tax cuts for themselves and benefit cuts for others manage to convince themselves that this is in everyone’s interest. People are in general good at that sort of self-delusion. The fact remains that the wealthy, on average, push for policies that benefit themselves even when they often hurt the economy as a whole. And the sheer wealth of the wealthy is what empowers them to get a lot of what they want.

So what does this imply going forward? First, in the near term, both during the 2020 election and after, it’s going to be really important to ride herd on both centrist politicians and the media, and not let them pull another 2011, treating the policy preferences of the 0.1 percent as the Right Thing as opposed to, well, what a certain small class of people want. There’s a fairly long list of things progressives have recently advocated that the usual suspects will try to convince everyone are crazy ideas nobody serious would support, e.g.

You don’t have to support any or all of these policy ideas to recognize that they are anything but crazy. They are, in fact, backed by research from some of the world’s leading economic experts. Any journalist or centrist politician who treats them as self-evidently irresponsible is doing a 2011, internalizing the prejudices of the wealthy and treating them as if they were facts.

But while vigilance can mitigate the extent to which the wealthy get to define the policy agenda, in the end big money will find a way — unless there’s less big money to begin with. So reducing the extreme concentration of income and wealth isn’t just a desirable thing on social and economic grounds. It’s also a necessary step toward a healthier political system.