Myanmar appears unprepared for return of refugees who might be put in camps. 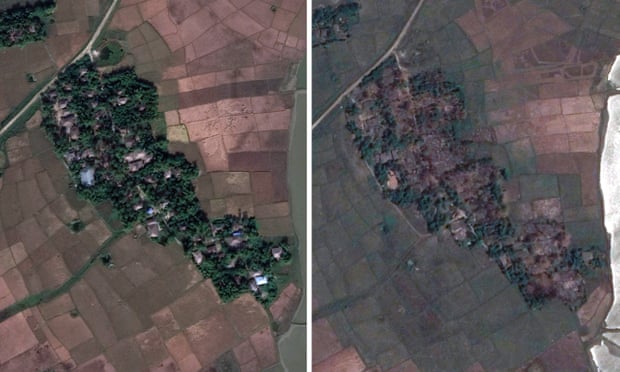 The village of Maw in Rohingya in 2017 (left). In the righthand image taken in 2018 the scale of the destruction can be clearly seen.
Photograph: Google Earth/ASPI

24 Jul 2019 – Analysis of satellite imagery has cast further doubt on promises that arrangements are being made by Myanmar for the safe and humane return of Rohingya Muslims, and revealed that the destruction of their villages has continued.

Despite repeated assurances by the Myanmar government that it would repatriate the 700,000 Rohingya who fled over the border from Rakhine state after a military-led violent crackdown in August 2017 – violence described by the UN as having “genocidal intent” – the preparations for their return have been “minimal”, a report by the Australian Strategic Policy Institute (ASPI) has found.

“We’ve found no evidence of widespread preparation for Rohingya refugees to return to safe and dignified conditions,” stated the report.

The report also found satellite evidence that the burning of the Rohingya villages in Rakhine has continued until this year, long after the initial outbreak of violence in August 2017 when the razing of Rohingya villages and the killing and rape of Rohingya men and women sent hundreds of thousands over the border to refugee camps in Bangladesh’s Cox’s Bazar region.

The ASPI researchers identified at least 58 Rohingya settlements that were subjected to fresh demolition in 2018, while satellite imagery also showed the demolition of other Rohingya villages in 2019, as part of what appears to be a campaign by the Myanmar military to ensure there are no habitable villages for the Rohingya to come back to.

“What surprised me most was the scale of the continued burning after 2017,” said Nathan Ruser, one of the authors of the report. “It wasn’t just scattered villages or occasional homes being burned in 2018 and 2019, the military went through whole landscapes and burned every village. So there is still that widespread, ongoing destruction of Rohingya residential areas.”

Ruser added: “This in particular undercuts the message from the Myanmar government that they are willing to pursue a repatriation process.”

Meanwhile, more than 320 Rohingya settlements destroyed in the violence show no sign of reconstruction, despite claims that repatriated refugees would be allowed to return to their original villages.

The data and satellite imagery, said the report, “cast doubt on the credibility of claims that refugees will be allowed to return to their homes”.

“Instead, we’ve found ongoing destruction of additional settlements and the construction of highly securitised camps and military bases that have been built, fortified or expanded on the sites of razed Rohingya settlements.”

While the conditions stipulated by the UN for the return of the Rohingya is that their return must be “voluntary, safe, dignified and sustainable”, which would include freedom of movement, the ASPI report backed up fears that any returning refugees would instead be placed in camps or highly militarised areas.

Rather than rebuilding Rohingya villages, the satellite images show that the construction focus in Rakhine has been on building or enlarging at least 45 camps, which human rights groups have previously expressed concern would be nothing more than “open-air prisons”. In addition, six military facilities have been built or expanded on former Rohingya settlements.

While some of the structures are intended to house the 128,000 internally displaced Rohingya refugees who are already living in squalid camps in Rakhine, “it’s very likely that the majority of these new camps, especially the ones that are under construction, are designed for returning refugees,” said Ruser. 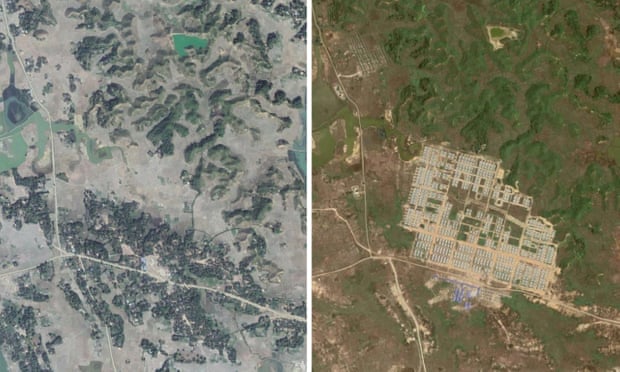 Hla Pho Khaung village. The second picture, from 2019, shows the construction of the Hla Pho Khaung transit camp, which it is believed has been built to house returning refugees. Photograph: Google Earth

Nonetheless, the international community has insisted progress is being made towards beginning repatriation, especially as conditions in Cox’s Bazar have worsened in recent months with the destructive and often fatal monsoon flooding. The governments of Myanmar and Bangladesh have signed a pact agreeing to work jointly towards repatriation.