The Martyrdom of Thomas Merton: An Investigation 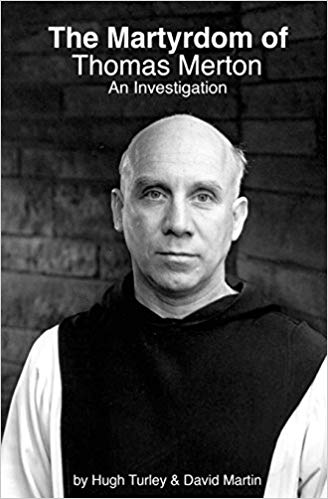 For years I have spoken out about how fishy the official story of Thomas Merton’s sudden death smelled to me.  I have also, over the years, met three CIA agents who were present in Southeast Asia at the time and asked them pointedly whether they killed Thomas Merton.  One said:

“I will neither affirm it nor deny it.”

The second (who spoke to a friend of mine, not to me) said:

“We were swimming in cash at the time with absolutely no accountability.  If there was just one agent who felt Merton was a threat to the country he could have had him done in with no questions asked.”

The third I met a month after my book A Way To God: Thomas Merton’s Creation Spirituality Journey came out and he answered:

“Yes.  And the last 40 years of my life I have been cleansing my soul from what I did as a young man working for the CIA in Southeast Asia in the 1960s.”

Now, Hugh Turley and David Martin offer The Martyrdom of Thomas Merton: An Investigation – a solid and very convincing investigation that provides what seems to be a thorough inquiry of all the parties involved including the four religious (three men and one sister who was also a doctor, falsely called a “nurse” in official documents) who first discovered the body.

The book includes important information about the body and the room, revealing, among other things, that there was blood coming from Merton’s neck and his body was neatly staged.  How could this be anything other than

The problem is, of course, that no autopsy was performed.  Now whose decision was that?

The cover up was immense, involving the Thai police (very much in league with the American military at the time); the American Embassy; the American Army; even key members of Merton’s Gethsamine monastery including the abbot and Merton’s secretary, Brother Hart.  The latter two deserve a certain leniency since surely the monastery was threatened and urged to keep silent about the facts. But to make a cover story—that Merton stepped out of a shower soaking wet and plugged in a fan and was electrocuted—is a lie and a cover up.

Turley and Martin provide detail after detail refuting the false information that has been disseminated for five decades.  There is even a Judas figure—a Belgian monk, whose room in the retreat center was above Merton’s, and who was the last person seen talking to Merton before he entered his fateful cell.  Others report this monk acting peculiarly after the murder. Strange to tell—or perhaps not so strange—he seems to have totally disappeared. Even his monastery claims to have no idea on earth where he could be.  It would seem he is either

So Thomas Merton, Cistercian monk and one of the greatest spiritual writers of the twentieth century died a martyr. A martyr to peace (because he was a loud voice against the Vietnam War and a mentor to the Berrigan brothers and others committed to nonviolent protest).  And he died at the hands of the American government in the very year, 1968, that Martin Luther King Jr and Robert Kennedy also suffered a similar fate.

Pope Francis, who praised Thomas Merton’s work in his speech to Congress, might want to canonize three American martyrs together and do it swiftly (since in Catholic theology a martyr goes directly to heaven): Dr Martin Luther King Jr, a prophet for social and racial justice; Thomas Merton, a prophet for peace and deep ecumenism or interfaith; and Sister Dorothy Stang, a prophet for eco-justice gunned down in the Amazon by paid thugs for large land owners and corporate big shots.

History evolves and it is ironic that today’s CIA is less an enemy of the people than yesterday’s – in fact acting in some ways a welcome buffer against today’s enemies of American democracy, whether emanating from Russia or from internal bodies beholden to Russia.  But lessons abound. First among them is what a martyr is about: As Jesus put it, “no greater love has a person than this, to lay down one’s life for their friends.”

Thank you, Thomas Merton.  Thank you Hugh Turley and David Martin for getting to the truth.

Matthew Fox is a spiritual theologian, an Episcopal priest and an activist for gender justice and eco-justice.  He has written 37 books that have been translated into other languages over 70 times. Fox holds a doctorate in the history and theology of spirituality from the Institut Catholique de Paris. He is recipient of the Abbey Courage of Conscience Peace Award (other recipients being the Dalai Lama, Mother Teresa, Ernesto Cardenal and Rosa Parks), the Gandhi King Ikeda Award, the Tikkun National Ethics Award, and others. His latest books are: Naming the Unnamable: 89 Wonderful and Useful Names for God…Including the Unnamable God; Stations of the Cosmic Christ; and The Lotus & the Rose: A Conversation between Tibetan Buddhism & Mystical Christianity.