This Photo Is about Bodies – Migrant Bodies, and Our Body Politic. Don’t Look Away

Monday’s [24 Jun] image of a drowned two-year-old and her father will haunt us. I hope it changes us, too. 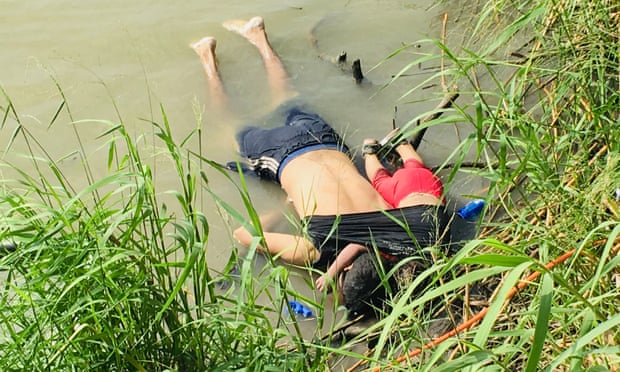 A body of water. A river running through mountain, bosque, desert and city; along two pueblos, between two states and separating two countries.

I lived beside a running body of water for a time – this is what I learned: it is impossible to ignore its power. It whispers its summons: cross here. Ford the still points. Wade. Float. Swim. Drown.

Once, many years ago, I heard that after a prolonged torrential rainfall the Rio Grande (Rio Bravo del Norte, to Mexicans) had reached unprecedented levels. Its floodwaters swept through a riverfront church, pulled a large wooden cross from the wall and carried it on its current. A woman who had camped out on the Mexican side of the river with her two children, waiting to cross into the US, saw the dark shape in the water. Before it surged past her, she pushed her children into the river, toward it. “Hold on,” she said. “Hold on to it until you reach the other side.”

Maybe she believed they would be borne above the waters by faith. Maybe she so despaired of their survival on her side of the river she was willing to chance it. Maybe someday she might stop replaying the exact moment when she let go of their hands in the water.

On Monday, Valeria Martínez, a two-year-old Salvadoran child, was found drowned in the shallows of the Rio Grande; her father, Óscar Alberto Martínez, 26, by her side. The photo that circulated is as haunting, in its way, as the 2015 photograph of Alan Kurdi, the three-year-old Syrian child whose image – tiny, lifeless, lying face down in the surf in Greece – moved European leaders to re-examine their policies toward migrants.

In this photo, Valeria wears little black sneakers and her red pants show the padded bottom that indicates a diaper beneath. Martínez, face down in the water, has tucked his daughter under his shirt so she won’t be torn away from him in the river. And then there’s this: she clung to him – as I remember my own daughter at that age, clinging to me when I carried her into a hospital, and we were both terrified to death but together, together – because Valeria’s arm is still flung around his neck when they are found.

This is a story about bodies – but not just Valeria’s body, and Martínez’s.

It is a story about the body politic. About how we, the people of this nation, react to a photo that illuminates the lethal consequences of the manipulation and damage that has been done to the asylum process.

By some accounts Valeria’s family had spent months in Mexico waiting to get on a list that might – no guarantees – enable them to lodge their asylum request at a port of entry. The “metering” and “remain in Mexico” policies that Donald Trump has instituted during his tenure have forced some asylum-seeking families – displaced by the climate crisis or grinding poverty or devastating violence – to try and find another way to have their asylum claim heard in the US, even if it is a risky way, even if it means battling a body of water.

Likewise, the administration’s use of the border patrol – and even active-duty military troops – to physically prevent asylum seekers from reaching ports of entry has had a chilling effect on established asylum processes.

Organizations like Human Rights First have proposed a “genuine humanitarian response” to the asylum crisis the administration has created: deploying Customs and Border Protection (CBP) officers to ports of entry to assist in asylum processing, appointing more immigration judges and interpreters, along with making immigration courts independent, among other solutions. Other NGOs and agencies used to dealing with refugee and asylee needs from a trauma-informed and humanitarian perspective probably have suggestions and potential solutions, too. And from these we may be able to establish a roadmap that is less oppressive than the one proposed by this administration.

Years ago, when I was envisioning the immigration dystopia that would become my novel Ink, I needed to create a “catalyst” moment, when the public at large became aware of what was happening in the novel’s universe in the same sort of way my protagonists were experiencing it. After a lot of dithering, I finally settled on a photograph of a child as that catalyst, and as it was shared and reshared by news sites and individuals alike, it became a proof and test of my proxy world’s humanity.

I have thought about that a lot in the past two years, as I’ve seen people stirred to action by the photographs of immigrant children separated from their parents by CBP and ICE. And now too, with this photo of Valeria and her dad.

What will the body politic do with the evidence before it?

I hope the answer is that we, as the recently coined hashtag says, will not look away. Because if we do, we will be haunted by more than just a photograph.

Sabrina Vourvoulias is the author of Ink (Rosarium Publishing, 2018), a near-future immigration dystopia, and is the editor of Generocity.org, a Philadelphia social impact news and event group