US Government Tops All for Creating Refugees 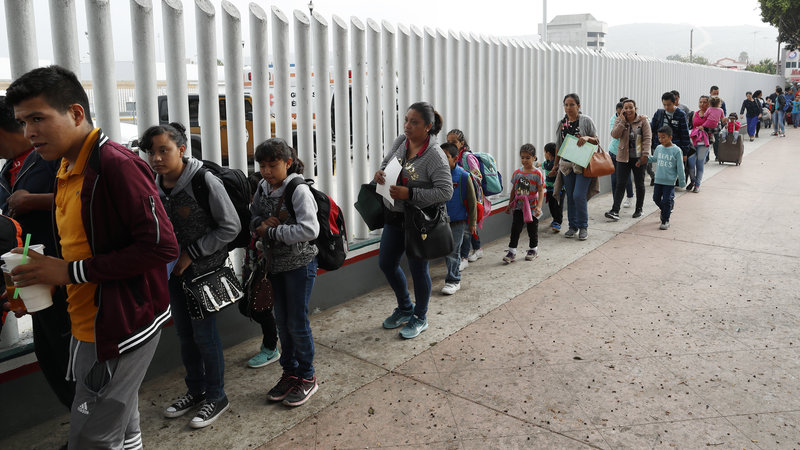 30 Jun 2019 – On June 19th, Statistica headlined “Number of forcibly displaced people reaches new high”, and when one looks at the data, one finds an even bigger story which stands behind those numbers.

This new report from the United Nations documents Statistica’s headline, and it proves that America’s regime-change operations have actually created around half of the world’s refugees. It proves that America’s penchant for invading and trying to overthrow the governments that its billionaires want to replace (“regime-change”) has been by far the biggest of all single causes of refugees worldwide, vastly higher than any other government. Regardless of how bad those other governments might possibly be, the US regime is far worse — at least as being the cause, the creator, of the world’s refugee problems.

Consider the countries that the US regime has recently regime-changed or attempted to.

The US regime invaded Afghanistan in 2001, Iraq in 2003, Syria in 2012-2019, and has been applying, in order to overthrow the Government of Venezuela, strangulating economic sanctions. All of those four target-countries (Syria, Venezuela, Iraq, and Afghanistan) lead the list of nations that are bleeding the most refugees. The US regime’s “regime-change” operations abroad are therefore certainly the leading cause of the world’s refugee-crisis.

That’s the big news in the new UN report, though it is news that the report itself ignores.

The biggest of these crises in 2018 were Syria and Venezuela, which were the US regime’s most recent regime-change operations. But Afghanistan and Iraq are also among the top bleeders of refugees — even now, over 15 years after the US regime had invaded them.

Mr De Zayas, a former secretary of the UN Human Rights Council (HRC) and an expert in international law, spoke to The Independent following the presentation of his Venezuela report to the HRC in September. He said that since its presentation the report has been ignored by the UN and has not sparked the public debate he believes it deserves. “Sanctions kill,” he told The Independent, adding that they fall most heavily on the poorest people in society, demonstrably cause death through food and medicine shortages, lead to violations of human rights and are aimed at coercing economic change.

In order for the US regime to blame Venezuela’s Government 100% for Venezuela’s problems including the economic shortages that result from the US regime’s sanctions, the US regime stages attempts to send aid to the Venezuelan people, and this aid is, of course, blocked by Venezuela’s Government, because it is just the aggressor’s PR stunt — the US regime’s effort to take over the country in a ‘kind’ way. (After all, Hitler claimed to love the “Volk,” even as he served the interests of Germany’s armaments-firms and the billionaires who controlled them.) However, if the aggressor had honestly wanted to help Venezuelans, it wouldn’t be applying such strangulating economic sanctions, which include penalties against countries that trade with Venezuela — an economic blockade against Venezuela.

Here are highlights in the new report from the UN:

The report says that in 2018, there were “13.6 million newly displaced” persons.

“Altogether, more than two thirds (67 per cent) of all refugees worldwide came from just five countries:”

“The main countries of asylum for refugees were:”

However, this chaotic UN report also states that:

Presumably, the reason why Colombia does’t show on the list of “newly displaced” is that most of its “8.0 million forcibly displaced” occurred during the civil war there, which peaked in 2009.

In other words: four of those five countries are lands where America’s strangulating economic sanctions, and invasions, by America’s own troops and by its proxy-forces such as Al Qaeda and other ‘rebels’, drove millions of people out. Though the confusing report doesn’t note it, most of that “highest in US” asylum-applications come from the US regime’s banana republics — Honduras, Guatemala, and El Salvador — where the US trained death squads etc. created (or at least encouraged) the problems, at least a decade or more ago. Consequently, even in some nations where the US regime didn’t create refugees by means of invasions, it created many by coups and other means.

Venezuelan refugees and asylum-seekers grew in number during 2018. The broader movement of Venezuelans through the region and beyond, increasingly took on the characteristics of a refugee situation, with some 3.4 million living outside Venezuela by the end of 2018, as more than 3 million Venezuelans left their homes, travelling mainly elsewhere in Latin America and the Caribbean. “This is the biggest exodus in the region’s recent history, and one of the biggest displacement crises in the world.” It could turn out to be even worse than Colombia’s was. The report notes:

“When my nine-month-old daughter died because of the lack of medicines, doctors or treatment, I decided to take my family out of Venezuela before another one of my children died. Diseases were getting stronger than us. I told myself, either we leave or we die.” – Eulirio Baes, a 33-year-old indigenous Warao from Delta Amacuro in Venezuela. He abandoned the Warao’s ancestral lands and took his entire family to Brazil after three relatives died.

Lebanon continued to host the largest number of refugees relative to its national population. 1 in 6 people there was a refugee. Jordan (1 in 14) and Turkey (1 in 22) ranked second and third, respectively. Of course, those lands receive mainly Syrian refugees.

At the end of 2018, Syrians continued to be the largest forcibly displaced population, with 13.0 million people living in displacement, including 6,654,000 refugees, 6,184,000 internally displaced people (IDPs) and 140,000 asylum-seekers. Colombians were the second largest group, with 8.0 million forcibly displaced, most of them (98 per cent) still living inside their country at the end of 2018. The top two foreign recipients of refugees from Colombia were Spain and Ecuador. As previously noted, Colombia’s refugees were generated by the lengthy civil war there, which peaked in 2009. The following visual, which is the most comprehensible part of this chaotic (and in places uninterpretable) UN report, doesn’t show Colombia, because these were the refugee-flows only for the year of 2018: 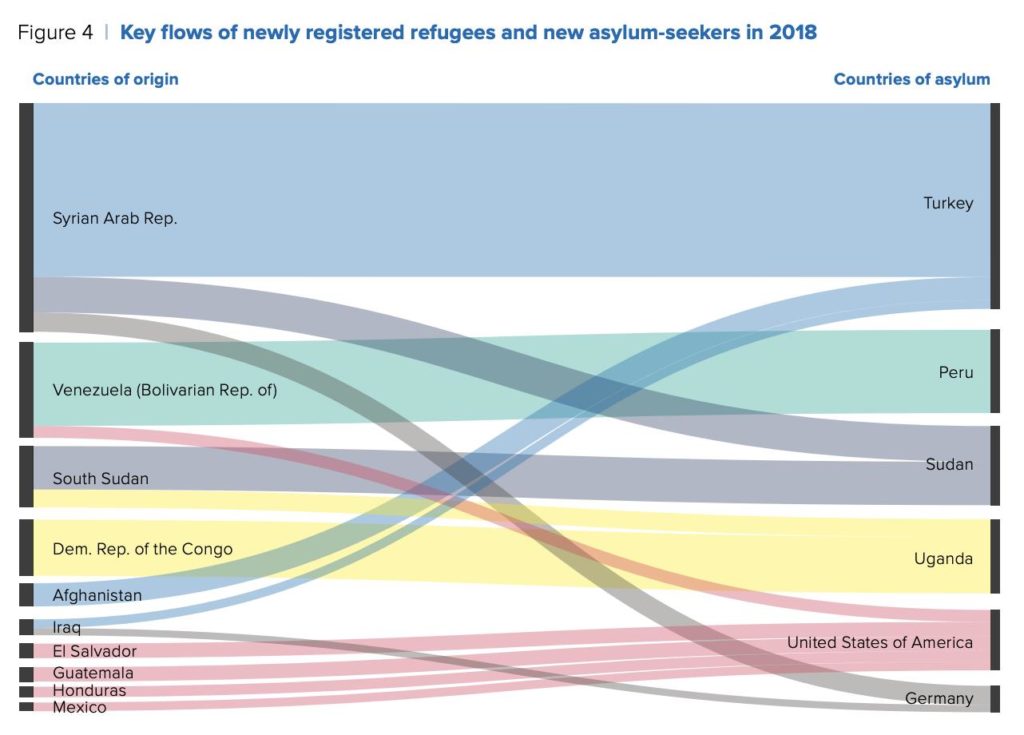 That visual is around half of the interpretable content in the entire 28-page UN report. It’s a visual way of showing that the US regime’s regime-change operations produce around half of the entire world’s refugee-problem. The only US Presidential candidate who even so much as just mentions America’s “regime-change wars” (and she is strongly against them) is Tulsi Gabbard, and she currently scores the support of fewer than 1% of America’s Democrats in that Party’s Presidential primary polls. So, at least America’s Democrats are overwhelmingly unconcerned about their country’s causing around half of the entire world’s refugee crisis. And there is no indication that America’s Republican voters are more concerned about it than the Democratic voters are. Americans, evidently, don’t care about this matter. At least, not yet.