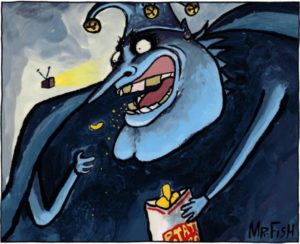 15 Jul 2019 – Donald Trump, like much of the American public, is entranced by electronic images. He interprets reality through the distortions of digital media. His decisions, opinions, political positions, prejudices and sense of self are reflected back to him on screens. He views himself and the world around him as a vast television show with himself as the star. His primary concerns as president are his ratings, his popularity and his image. He is a creature—maybe the poster child—of the modern, post-literate culture, a culture that critics such as Marshall McLuhan, Daniel Boorstin, James W. Carey and Neil Postman warned us about.

It is not, as some have suggested, merely that Trump speaks at the level of a seventh-grader or that he harkens back to a preliterate oral culture. He embodies the incoherence of the modern digital age, filled with sudden shifts from subject to subject, a roller-coaster ride of emotional highs and lows punctuated with commercials. There is nonstop stimulation. Seldom does anything occupy our attention for more than a few seconds. Nothing has context. Images overwhelm words. We are perpetually confused, but always entertained. We barely remember what we saw or heard a few minutes earlier. This is by design of the elites who manipulate us.

“It is not merely that on the television screen entertainment is the metaphor for all discourse,” Postman points out. “It is that off the screen the same metaphor prevails.” Americans, because television stages their world, “no longer talk to each other, they entertain each other.” Trump is what is produced when a society severs itself from print, when it pushes art, ethics, classics, philosophy, history and the humanities to the margins of the universities and culture, when its members spend hours sitting inert in front of a screen. Information, ideas and epistemology are, as Postman writes, given form today by electronic images.

It is a mistake to see what is happening as cultural regression. It is worse than that. Oral cultures prized memorization and cultivated the high art of rhetoric. Leaders, playwrights and poets in oral cultures did not speak to their publics in Trump’s crude vernacular. More ominous than the president’s impoverished vocabulary is that he cannot string together sentences that make sense. This replicates not only the shoddy vocabulary of television, but more importantly the incoherence of television. Trump is able to communicate with tens of millions of Americans, also raised in front of screens, because they too have been linguistically and intellectually mutated by digital images. They lack the ability to detect lies or think rationally. They are part of our post-truth culture. 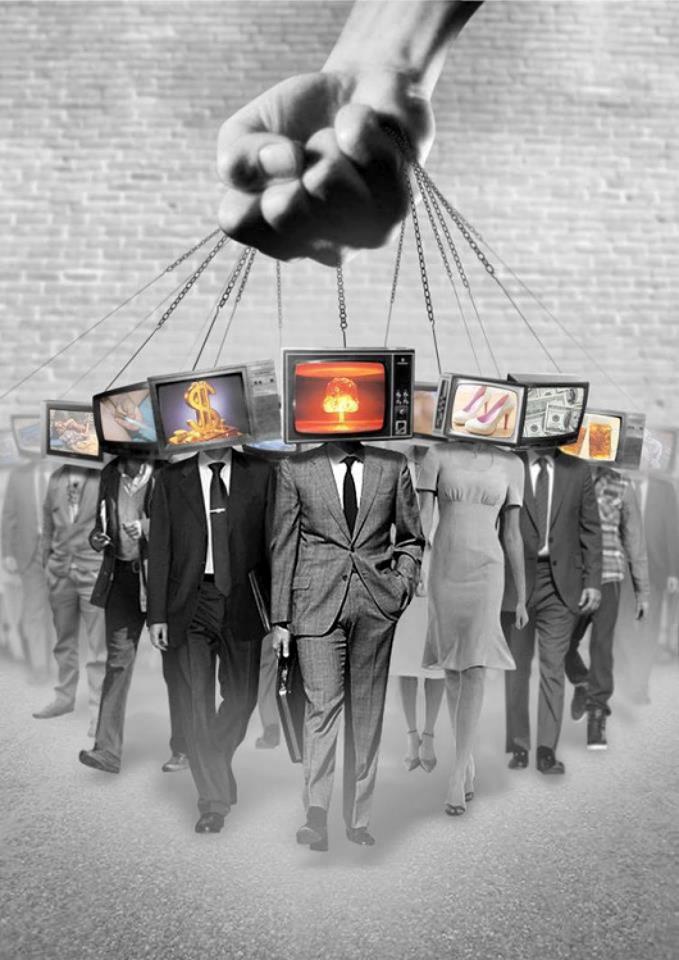 Nearly any tweet or spoken remark by Trump illustrates this incoherence. In a Jan. 31 interview with The New York Times he gave this answer when asked about the gruesome murder of the journalist Jamal Khashoggi in the Saudi consulate in Istanbul:

Yeah. Khashoggi. I thought it was a terrible crime. But if you look at other countries, many other countries. You look at Iran, not so far away from Saudi Arabia, and take a look at what they’re doing there. So, you know, that’s just the way I feel. Venezuela is very much in flux. We’ve been hearing about it for probably 14 years now, between the two of them. And some terrible things are happening in Venezuela. So, if I can do something to help people. It’s really helping humanity, if we can do something to help people, I’d like to do that.

Electronic images are our modern-day idols. We worship the power and fame they impart. We yearn to become idolized celebrities. We measure our lives against the fantasies these images disseminate. If something does not appear on a screen or is proclaimed on a screen its authenticity is questioned. We fervently build miniature social media platforms where we daily update our “life the movie,” confusing self-presentation with genuine communication and friendship. This yearning to be validated by electronic images and their audiences has made us an isolated, uninformed, alienated and very unhappy people.

“Now the death of God combined with the perfection of the image has brought us to a whole new state of expectation,” John Ralston Saul writes. “We are the image. We are the viewer and the viewed. There is no other distracting presence. And the image has all the Godly powers. It kills at will. Kills effortlessly. Kills beautifully. It dispenses morality. Judges endlessly. The electronic image is man as God and the ritual involved leads us not to a mysterious Holy Trinity but back to ourselves. In the absence of a clear understanding that we are now the only source, these images cannot help but return to the expression of magic and fear proper to idolatrous societies. This in turn facilitates the use of electronic image as propaganda by whoever can control some part of it.”

The fixation on electronic images by Trump means he and millions of other American adults—who, according to a 2018 report by the Nielsen company, on average watch four hours, 46 minutes of TV each day and spend “over 11 hours per day listening to, watching, reading or generally interacting with media”—have severed themselves from complex thought. They have been infantilized. Television, including the news, reduces all reality to a childish, cartoonish simplicity. News as presented on screens “provides degenerate photographs or a pseudo-reality of stereotypes,” James W. Carey writes. “News can approximate truth only when reality is reducible to a statistical table: sport scores, stock exchange reports, births, deaths, marriages, accidents, court decisions, elections, economic transactions such as foreign trade or balance of payments.” News on our screens is incapable of imparting complexity and nuance. It is devoid of historical, social or cultural context. TV news speaks in easily digestible clichés and political and cultural tropes. It is sensational and fragmented. The frenetic pace of TV news means that except when delivering statistics, the programs can trade only in established stereotypes. TV news is, in essence, divorced from the real, mindlessly grounded in the ruling elites’ reigning ideology of neoliberalism, militarism and white supremacy.

Postman, in his book “Amusing Ourselves to Death,” writes that after the development of the telegraph, “News took the form of slogans, to be noted with excitement, to be forgotten with dispatch.” Arguing that the 19th-century invention is the basis for communication in the digital age, he says, “Its language was also entirely discontinuous. One message had no connection to that which preceded or followed it. Each ‘headline’ stood alone as its own context. The receiver of the news had to provide a meaning if he could. The sender was under no obligation to do so. And because of all this, the world as depicted by the telegraph began to appear unmanageable, even undecipherable. The line-by-line, sequential, continuous form of the printed page slowly began to lose its resonance as a metaphor of how knowledge was to be acquired and how the world was to be understood. ‘Knowing’ the facts took on a new meaning, for it did not imply that one understood implications, background, or connections. Telegraphic discourse permitted no time for historical perspectives and gave no priority to the qualitative.”

Those who seek to communicate outside of digital structures to question or challenge the dominant narrative, to deal in ambiguity and nuance, to have discussions rooted in verifiable fact and historical context, are becoming incomprehensible to most of modern society. As soon as they employ a language that is not grounded in the dominant clichés and stereotypes, they are not understood. Television, computers and smartphones have addicted a generation and conditioned it to talk and think in the irrational, incoherent baby talk it is fed day after day. This cultural, historical, economic and social illiteracy delights the ruling elites who design, manage and profit from these sophisticated systems of social control. Armed with our personal data and with knowledge of our proclivities, habits and desires, they adeptly manipulate us as consumers and citizens to accelerate their amassing of wealth and consolidation of power.

“The only people who grasp the distinction between reality and appearance, who grasp the laws of conduct and society, are the ruling groups and those who do their bidding: scientific, technical elites who elucidate the laws of behavior and the function of society so that people might be more effectively, albeit unconsciously, governed,” Carey writes in Communication as Culture: Essays on Media and Society.

Daniel Boorstin in “The Image: A Guide to Pseudo-Reality in America” argues that the fabricated, the inauthentic and the theatrical have now displaced the natural, the genuine and the spontaneous. Reality has become stagecraft. We live in a world, he writes, “where fantasy is more real than reality.” He warns:

We risk being the first people in history to have been able to make their illusions so vivid, so persuasive, so ‘realistic,’ that they can live in them. We are the most illusioned people on earth. Yet we dare not become disillusioned, because our illusions are the very house in which we live; they are our news, our heroes, our adventure, our forms of art, our very experience.

Trump is a product of this cultural decay, not an aberration. The way he speaks, acts and thinks is the way many Americans speak, act and think. He will one day disappear, but the cultural degeneracy that produced him will remain. Academic institutions, which should be the repositories of culture and literacy, are transforming themselves, often with corporate money, into adjuncts of the digital age, expanding departments that deal with technology, engineering and computer science—the largest major at universities such as Princeton and Harvard—while diminishing the disciplines that deal with art, philosophy, ethics, history and politics. These disciplines, rooted in print, are the only antidotes to cultural death.

Intellectual historian Perry Miller in his essay “The Duty of Mind in a Civilization of Machines” calls us to build counterweights to communication technology in order “to resist the paralyzing effects upon the intellect of the looming nihilism” that defines the era. In short, the more we turn off our screens and return to the world of print, the more we seek out the transformative power of art and culture, the more we re-establish genuine relationships, conducted face-to-face rather than through a screen, the more we use knowledge to understand and put the world around us in context, the more we will be able to protect ourselves from the digital dystopia.

One Response to “Worshipping the Electronic Image”