‘A New Hawaiian Renaissance’: How a Telescope Protest Became a Movement

Demonstrators opposed to the building of a telescope on Mauna Kea, the state’s highest peak, have forged a community. 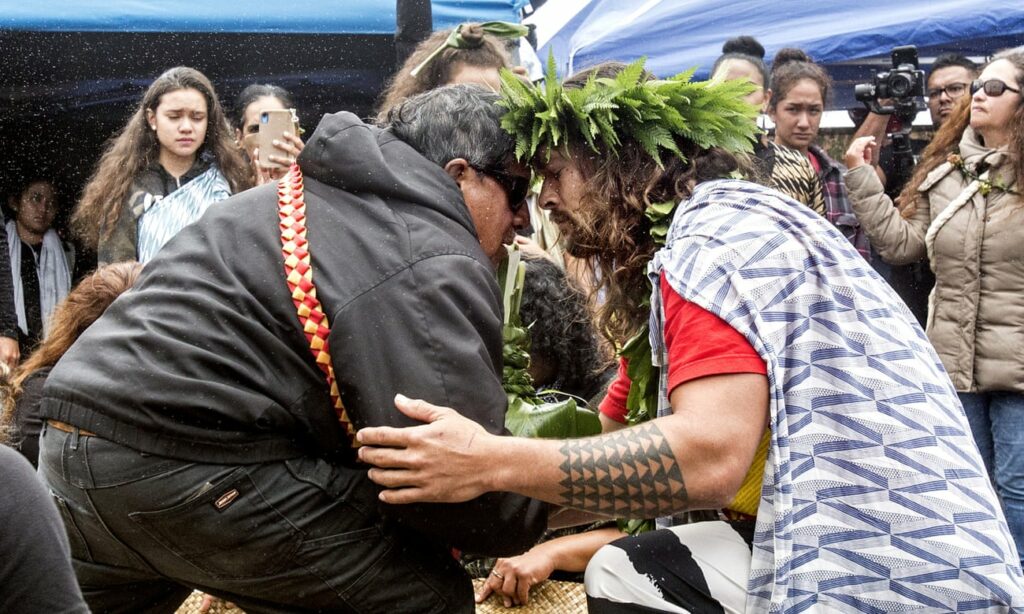 17 Aug 2019 – On Hawaii’s Big Island, a protest against a $1.4bn observatory on Mauna Kea, a mountain considered sacred by many Native Hawaiians, is entering a second month. In that time, the protest site has swelled from a few hundred to several thousands, attracted celebrity visitors, and built a community of Native Hawaiians who see it as a pivotal moment.

The protest site sits at an elevation of 6,632ft, where the cold wind whips across hardened lava fields. But amid this inhospitable environment, weeks of demonstration have given rise to a sense of permanence.

The site stretches across a two-lane highway, where trucks flying a Native Hawaiian flag and the upside-down state flag line both sides of the road. A “Kūpuna tent”, where the elders of the community gather, is strategically placed to block an access road up the mountain in order to stop construction vehicles from reaching the summit.

New arrivals are encouraged to sign in at an orientation station. There is a tented cafeteria providing free meals, and a community-run medic station, daycare and school. Along the barren roadside, tropical flowers have been casually stuck in traffic cones. People pound taro, a Hawaiian crop, in the traditional way on wooden boards to make poi, a local dish.

The protest stems from controversy over the fate of Mauna Kea, the tallest peak in Hawaii and the proposed site of an enormous observatory known as the Thirty Meter Telescope (TMT). The summit, 13,796ft above sea level, is said to be an ideal location to look into deep space. TMT is expected to capture images ‘that look back to the beginning of the universe. Protesters, who call themselves kia‘i, or “protectors”, argue the construction will further desecrate Mauna Kea, which is already home to about a dozen telescopes. 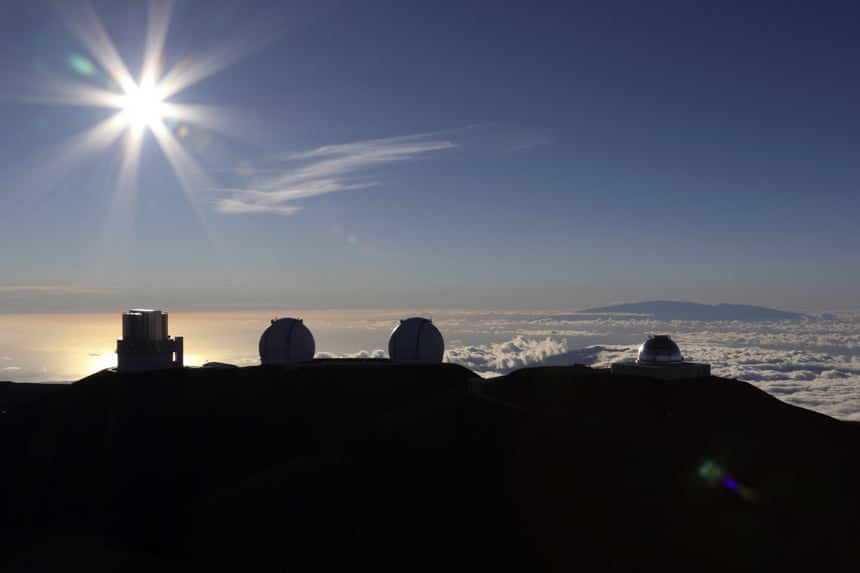 The sun sets behind telescopes at the summit of Mauna Kea in Hawaii.
Photograph: Caleb Jones/AP

Kealoha Pisciotta, one of the protest leaders and a spokesperson for Mauna Kea Anaina Hou, a Native Hawaiian group, says the movement is “pushing back on corporate culture” through Hawaiian concepts of “Kapu Aloha”, which emphasizes compassionate responses, especially towards opponents, and “Aloha ʻĀina”, a saying that translates to “love of the land”.

“We are just joining the world’s indigenous movements,” Pisciotta says. “We need Kapu Aloha … to bring back the balance from the insanity and destruction of our earth.”

Pisciotta said that the protesters were showing the world a way “to really live differently” while protecting the land.

“For Native Hawaiians, there is a question of our right to self-determination as defined by international law, but I think it’s so much bigger than that,” said Pisciotta. “It’s about us learning to live and be interdependent.” 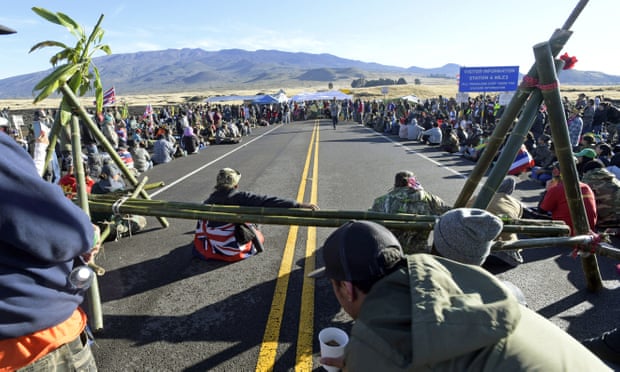 Why Are the Protests Happening?

Hawaiians consider Mauna Kea sacred for numerous reasons. The mountain is known as the home to Wākea, the sky god, who partnered with Papahānaumoku, the earth goddess. Protesters hope to protect and help restore the native ecosystem on Mauna Kea.

But the protests are also part of a legacy for Native Hawaiians that goes back to 1893, when the Hawaiian Kingdom was overthrown. Hawaiians lost their land as well as their culture, as the latter was suppressed through law and religion. It wasn’t until the 1970s, during a period of cultural flourishing known as the Hawaiian Renaissance, that the Hawaiian language was allowed to be spoken in school and that the hula was revived.

The period was defined by its own resistance movement, as activists focused on stopping the US military from using Kahoʻolawe, one of the eight main Hawaiian Islands, as a target for bombing practice. After more than a decade of peaceful protests and occupations of the island, the US government ended the live-fire training in the 1990s.

Some see the latest protest action as a new Hawaiian Renaissance. Days are punctuated by the blowing of the conch shell to announce ceremonies that include chanting, hula, and hoʻokupu (offerings). Several celebrities with Hawaii ties have travelled here to participate, including Dwayne “The Rock” Johnson, Jason Momoa, and Jack Johnson. 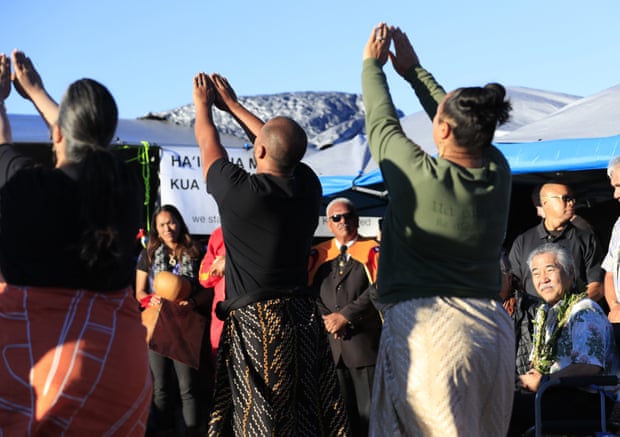 Hawaii’s governor, David Ige, right, watches a performance during a visit to the ninth day of protests against the Thirty Meter Telescope, on 23 July.
Photograph: Jamm Aquino/AP

“The atmosphere here is incredible. We’re all here protecting our ʻāina [land]”, said Kamuela Park, a protester at the site. He added that it had been “awesome to see people from all spectrums coming here in support”.

Peaceful demonstrators have faced one major confrontation with police. Three days into the protest, 38 kūpuna (revered elders) were arrested for blocking the road that leads to the construction site. That same day, Hawaii’s governor, David Ige, signed an emergency proclamation giving law enforcement more control over the area and allowed them to bring in National Guard troops. Images of the elderly being arrested quickly spread, garnering sympathy for the movement and attracting more people to the site. 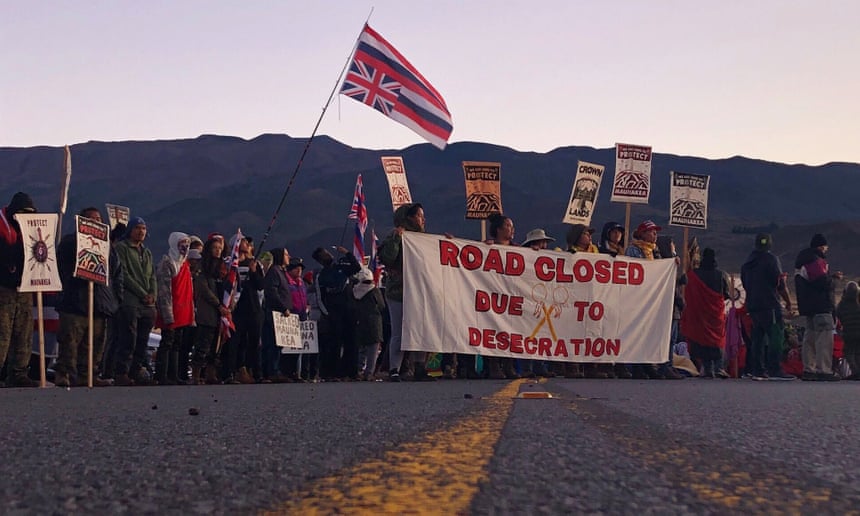 Demonstrators block a road at the base of Hawaii’s tallest mountain, on 15 July. Photograph: Caleb Jones/AP

Negotiations between government officials and protesters have slowed since the arrests. On 30 July, the governor rescinded his emergency proclamation. He also extended the window during which construction could begin from 60 days to two years, meaning the protesters would theoretically need to block the road until September 2021.

“I want to assure everyone that we are committed. Our law enforcement officers will remain at the site to ensure the safety of all of those involved,” said Ige at a press conference. “We continue to seek and find a peaceful solution to move this project forward.”

While tensions may have eased, protesters have said they will stay until they stop TMT from being built. Demonstrators proved their endurance in early August as many of them stayed at the protest site while two consecutive storms passed by the islands.

Pisciotta, who used to work at the Mauna Kea observatories as a telescope systems specialist, says the movement has been especially “huge” for young people.

“Some of the elders, they lived through the time it was prohibited to speak the language,” she says. Now younger Hawaiians grow up speaking it in school and with strong cultural affiliations. Hawaiian youth who are camping out are helping to organize donations, teaching some of the courses at the community-led school, and spreading the word on social media.

“In our philosophy, the land and the people are one,” said Pisciotta, about Aloha ʻĀina. “So it was a rallying point for the renaissance and now this is a kind of new renaissance.”