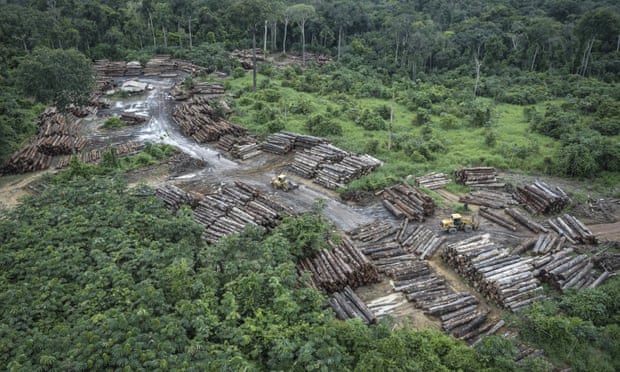 Amid an international outcry over Amazon deforestation, the Brazilian government has met to review the data collection system.  Photograph: Felipe Werneck/AP

1 Aug 2019 – The Amazon forest is being burned and chopped down at the most alarming rate in recent memory, but the Brazilian government of Jair Bolsonaro is focused on reinterpreting the data rather than dealing with the culprits, monitoring groups have said.

At a clearance rate equivalent to a Manhattan island every day, deforestation in July was almost twice as fast as the worst month ever recorded by the current satellite monitoring system, which is managed by the government’s National Institute for Space Research.

Over the single month, the latest data shows destruction of more than 1,800 square kilometres, which is pushing the world’s biggest rainforest towards an irreversible tipping point and eroding a globally essential sink for carbon dioxide.

After an international outcry, the Brazilian government – which is closely aligned with the loggers, miners and farmers responsible for most of the forest loss – held a special meeting on Wednesday of ministers and senior officials from the environment ministry, the science and technology ministry, and agencies responsible for satellites and forest protection.

The primary topic, according to several sources, was a review of the data collection system, which has come under attack from Bolsonaro and other ministers who have been embarrassed by the evidence from their own government that Brazil is moving in the opposite direction from the deforestation control commitments it made as a signatory to the Paris climate treaty.

The far-right government is investigating the possibility of an alternative monitoring scheme, but scientists defended the credibility of the existing system, which is recognised overseas as one of the best in the world. But the battle over the numbers looks set to continue.

After the meeting, the environment minister, Ricardo Salles, admitted deforestation was rising, but he continued to criticise what he called “the lack of precision in the data” and the “wrong” interpretations of the journalists who reported on it. He said the government wanted to make greater use of private satellite data and strengthen the team of analysts working on it.

This has prompted concerns in the science community and among climate activists that ministers may be preparing to twist or devalue the numbers to hide the true scale of deforestation.

The Climate Observatory NGO said the government had failed to explain why deforestation has hit the worst monthly level since the Deter satellite system was established in 2004 and also failed to discredit the numbers.

“What is even worse is that [Ricardo Salles] has reaffirmed the intention to use public money to contract yet another system of remote sensing, when what is missing in Amazonia at this time is supervision and investment in sustainable activities,” the climate group said in a statement. “Bolsonaro blamed the thermometer for the fever. Now the minister blames the thermometer reading. The disease, however, remains untreated.”

Carlos Souza, of the independent monitoring group Imazon, said foreign satellites would still be able to track what was happening in the Amazon, but he was worried the introduction of yet another new system would confuse the data and make it hard to compare with the past and track historical trends.

“I’m very concerned,” he said. “In the past it was very useful to respond to the trends and to show the world Brazil is keeping on track of deforestation. If you get rid of historical trend, you lose that reference and stop putting on pressure.”