Lessons from Einstein for Scientists Today

19 Aug 2019 – Albert Einstein is widely recognized as the greatest scientist of his time.  In 2005, physics societies throughout the world celebrated the 100th anniversary year of Einstein’s “miracle year,” in which he produced five papers that would change humanity’s view of the universe.  The year 2005 also marked the 50th anniversary of Einstein’s death and of the issuing of his last public appeal, the Russell-Einstein Manifesto.  It is an appropriate time to consider what lessons we might draw from Einstein’s life that would benefit those engaged in scientific activities today.

Lesson 1: Think for Yourself

Einstein was a scientist who challenged prevailing assumptions, both in science and in society.  He was an innovative thinker, a man who thought for himself.  He never just went along with prevailing attitudes or structures.  He asked startlingly fresh questions, reached his own conclusions, and stood by them no matter what orthodoxies or power structures they challenged.

Lesson 2: Reflect upon the Social Implications of Science and Technology

Einstein was extremely thoughtful about the implications of science and technology.  He understood the potential power of science and technology for both constructive and destructive purposes.  Fearing destructive uses of atomic power by Germany, he signed a letter to President Roosevelt in 1939, warning the US of the potential for a German atomic bomb and encouraging the US to undertake research on such a bomb in order to deter a German bomb.

Later, when the US used its own atomic bombs at Hiroshima and Nagasaki, after the Germans had already been defeated, Einstein called his letter to Roosevelt the greatest mistake of his life.  For the remaining years of his life, Einstein worked with other scientists to end the nuclear weapons threat to humanity, and was an outspoken advocate of this cause. 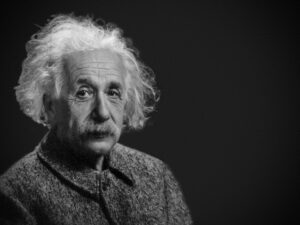 Einstein spoke out regularly on issues of social importance.  He opposed militarism and war, and warned society of the new dangers of the Nuclear Age.  “The splitting of the atom,” he said, “has changed everything save our modes of thinking, and thus we drift toward unparalleled catastrophe.”  Einstein was never reluctant to lend his name or express his thoughts in support of issues he considered to be of social importance.

Lesson 4: Be Responsive to Civil Society

Einstein not only spoke out on issues he considered to have social relevance.  He was also responsive to those who asked for his opinions on key social issues, such as war and peace, weaponry and world government.  He took time to respond to individuals from all walks of life, including youth.  He also engaged in important public intellectual exchanges with other leading figures of his time, including psychoanalyst Sigmund Freud and poet Rabindranath Tagore.

Lesson 5: Be a World Citizen

Einstein viewed himself as a citizen of the world, and believed that world government, at least as it pertained to security, was necessary to control war and nuclear weaponry.  Einstein identified with humanity as a whole more than with any one country, and he was critical of any country, including his own by birth or choice, that promoted militarism.

Einstein was not a servant of authority.  He was willing to stand toe to toe with power.  When Einstein had a highly respected professorship in Germany in his early career, and nearly all the scientific community signed onto a statement supportive of German militarism, Einstein was one of only a handful of vocal opponents to this statement who signed a counter-statement.  He was unwilling to give his name in support of what he did not agree with.  He was his own person, and quite willing to stand up to and challenge authority. 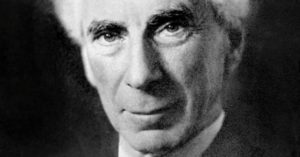 Lesson 7: Let Your Conscience Be Your Guide

Einstein believed in letting one’s conscience be his guide, and lived this way throughout his life.  He was a strong supporter of conscientious objection to war.  He stated, “I believe that a refusal on conscientious grounds to serve in the army when called up, if carried out by 50,000 men at the same moment, would be irresistible.”

The Russell-Einstein Manifesto, which was the final public appeal that Einstein signed before his death, may be thought of as his final testament.  In this appeal, the signors posed two starkly different potential futures: one characterized as a paradise on earth and the other characterized by universal death.  The key to a positive future, as expressed in the Manifesto, was to “Remember your humanity, and forget the rest.”  Einstein himself never lost touch with his own humanity.  He always stood at the cutting edge of the arc of justice and, with the exception of advocating the defeat of the Nazi regime in World War II, was an unwavering pacifist and proponent of peace.

Were Einstein able to view the world of today, more than fifty years following his death, I think he would be deeply disappointed by the manner in which most of the world’s scientists have failed to take responsibility for the consequences of their work.  Einstein’s example for scientists was first and foremost to be compassionate human beings who care about the world around them and other human beings, regardless of their nationality or ethnicity.  He did not view science and technology as neutral.  He wanted its destructive purposes to be controlled, and he called for a world government capable of preventing war and eliminating weapons of mass destruction.

I believe that Einstein would have been proud of the scientists who have followed in his footsteps.  Certainly he would have been extremely pleased by Joseph Rotblat, the youngest signer of the Russell-Einstein Manifesto, who went on to organize and lead the Pugwash Conferences on Science and World Affairs.  He would have applauded Professor Rotblat and Pugwash receiving the 1995 Nobel Peace Prize for their efforts to cross the Cold War divide and reduce the nuclear threat to humanity.

I’m sure Einstein would also have been proud of the scientists and engineers who created and have participated in the International Network of Engineers and Scientists for Global Responsibility (INES) for the bold steps they have taken to promote nuclear disarmament, prevent nuclear proliferation, pursue sustainable development, and support scientific whistle-blowing and higher ethical standards for scientists and engineers.

Einstein was a most remarkable human being, a man who changed our view of the universe, and who also demonstrated a great moral imagination and a high level of commitment to a more just and peaceful world.  Scientists today would do well to learn from Einstein’s life the lessons that made him both a responsible scientist and a great human being.  While it is highly unlikely that scientists today will reach Einstein’s pinnacle of brilliant achievement, all have the possibility to follow his example of personal integrity, moral leadership, public outreach and commitment to restricting scientific endeavor to constructive purposes.