The Russell-Einstein Manifesto on Nuclear Weapons 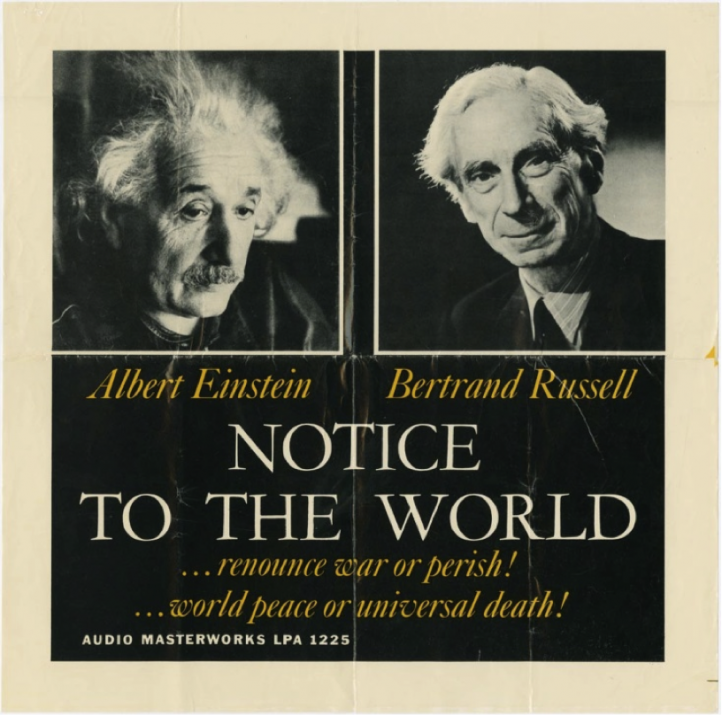 We are speaking on this occasion, not as members of this or that nation, continent, or creed, but as human beings, members of the species Man, whose continued existence is in doubt. The world is full of conflicts; and, overshadowing all minor conflicts, the titanic struggle between Communism and anti- Communism.

No one knows how widely such lethal radioactive particles might be diffused, but the best authorities are unanimous in saying that a war with H-bombs might possibly put an end to the human race. It is feared that if many H-bombs are used there will be universal death, sudden only for a minority, but for the majority a slow torture of disease and disintegration.

Here, then, is the problem which we present to you, stark and dreadful and inescapable: Shall we put an end to the human race; or shall mankind renounce war? People will not face this alternative because it is so difficult to abolish war.

The abolition of war will demand distasteful limitations of national sovereignty. But what perhaps impedes understanding of the situation more than anything else is that the term “mankind” feels vague and abstract. People scarcely realize in imagination that the danger is to themselves and their children and their grandchildren, and not only to a dimly apprehended humanity. They can scarcely bring themselves to grasp that they, individually, and those whom they love are in imminent danger of perishing agonizingly. And so they hope that perhaps war may be allowed to continue provided modern weapons are prohibited.

Although an agreement to renounce nuclear weapons as part of a general reduction of armaments would not afford an ultimate solution, it would serve certain important purposes. First: any agreement between East and West is to the good in so far as it tends to diminish tension. Second: the abolition of thermo-nuclear weapons, if each side believed that the other had carried it out sincerely, would lessen the fear of a sudden attack in the style of Pearl Harbour, which at present keeps both sides in a state of nervous apprehension. We should, therefore, welcome such an agreement though only as a first step. Most of us are not neutral in feeling, but, as human beings, we have to remember that, if the issues between East and West are to be decided in any manner that can give any possible satisfaction to anybody, whether Communist or anti-Communist, whether Asian or European or American, whether White or Black, then these issues must not be decided by war. We should wish this to be understood, both in the East andin the West. There lies before us, if we choose, continual progress in happiness, knowledge, and wisdom. Shall we, instead, choose death, because we cannot forget our quarrels? We appeal, as human beings, to human beings: Remember your humanity, and forget the rest. If you can do so, the way lies open to a new Paradise; if you cannot, there lies before you the risk of universal death.

“In view of the fact that in any future world war nuclear weapons will certainly be employed, and that such weapons threaten the continued existence of mankind, we urge the Governments of the world to realize, and to acknowledge publicly, that their purpose cannot be furthered by a world war, and we urge them, consequently, to find peaceful means for the settlement of all matters of dispute between them.”