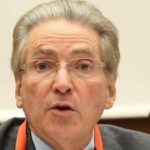 “As a former staffer of the Office of the High Commissioner For Human Rights, I know how things work.  There are people with prejudices.   They have an axe to grind and they grind it and they omit information that just doesn’t fit the matrix that they want to put forward…Now this, of course, is not just a problem of methodology.  This is also a problem of ethics.  The professional ethics of a staff member must include a true reproduction of the information received from all sources…the information given to the High Commissioner, I have seen much of that information, which also dates back to 2017, and none of it was ever reflected by Zeid Ra’ad Al Hussein, and is also not reflected by this new report…I think it is necessary for the credibility of the office to change the team that has been doing these reports in the past because they have proven not to be objective.  They have proven not to follow what I would consider the minimum requirements of any serious research.

“I think that not giving appropriate weight to the violence of the guarimbas, of the opposition, not going into the dislocation, the disturbance of repeated attempts at overthrowing the government, the coup d’etat, the unilateral declaration of the presidency of Guaido, followed by the so-called humanitarian aid that the United States was going to force from Colombia into Venezuela, followed by the call to the army to overthrow Maduro on the 30th of April last, etc., the attempts on the life of Maduro himself—All of these things have an impact on the functioning of any government….But back in 2017, and I’ve seen the videos, the opposition used Molotov cocktails.  The opposition used real bullets.  The opposition burned alive seven human beings.”

In an appallingly distorted and biased report by United Nations High Commissioner of Human Rights Michelle Bachelet, the shameful failure to report or even mention the atrocities committed by the Venezuelan so-called “peaceful opposition” is a sin of omission so egregious as to discredit the entire report, and disqualify the professionalism of those who compiled it.  It is also shocking that Michelle Bachelet affixed her own imprimatur to this report:  Madame Bachelet should, at the very least, have mentioned  particularly infamous atrocities perpetrated by the Venezuelan opposition, atrocities which actually exceeded in savagery some of the horrors perpetrated by the fascist dictatorship of Chile’s Pinochet, barbarism of which Chile’s Michelle Bachelet herself must be fully aware.

This report on Venezuela dates back as far as 2014, and clearly includes 2017, during which racist atrocities perpetrated by the opposition against supporters of the government are so heinous that their glaring omission from this current report constitutes a deliberate attempt to suppress and deny the truth, transforming the report into a blatant propaganda device, devoid of reliability.

On May 22, 2017 the torture-murder of an Afro-Venezuelan was committed by members of the opposition demonstrating in the wealthy community of Altamira:  a young Afro-Venezuelan, Orlando Jose Figuera was beaten to the ground by a mob of over 40 members of the opposition, who knifed him six times in the stomach, doused his body with gasoline and burned him alive.  Figuera, a government supporter, died ten days later.  The opposition perpetrators of this heinous atrocity were never apprehended.

These Venezuelan racist members of the opposition  subsequently burnt alive at least five other government supporters, including Danny Subero, Pedro Josue Carillo, several other youths: at least eighteen government supporters were murdered in this “peaceful” opposition demonstration, alone.  Absolutely no mention of this is contained in Michelle Bachelet’s current report, which virtually demonizes the Venezuelan government.

These crass omissions of numerous crimes and atrocities perpetrated by the Venezuelan opposition scandalously discredit this report, and reveal it to be sycophantic propaganda, both intellectually and morally bankrupt, currying favor with Western financial powers, and unworthy of Madame Bachelet, herself, who cannot, or should not have forgotten the cases in Chile of the “Quemados.”  Rodrogo Rojas and Carmen Gloria Quintana,  were similarly doused with gasoline and set on fire by Pinochet’s gestapo:  Rojas died of his burns, and Carman Gloria underwent more than 30 plastic surgery operations to attempt repair her face and body, still disfigured with scarring.  There is one difference:  Pinochet’s killers omitted the six knife wounds to the stomach that Figueroa suffered.  Members of the Venezuelan opposition seem to have exceeded in savagery even Pinochet’s Nazis.