The Abrogation of Kashmir’s Special Status: Why Now?

What motivated the BJP to renounce Kashmir’s autonomy and what are the implications of this decision? 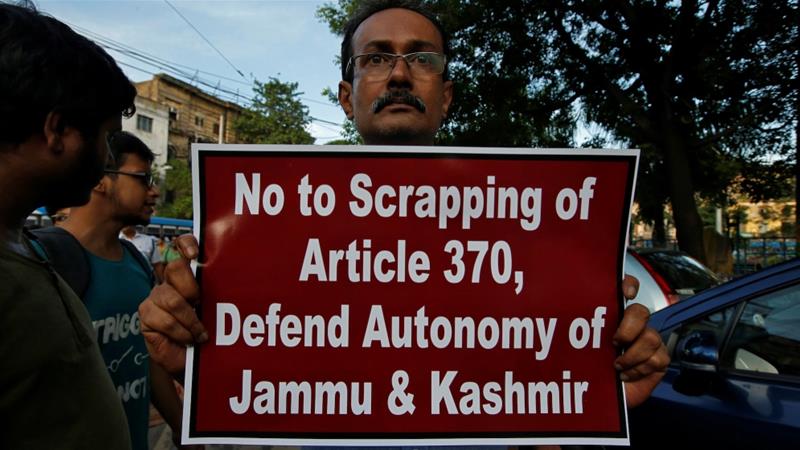 A man displays a placard during a protest against the scrapping of special constitutional status for Kashmir, in Kolkata, India, August 6, 2019.  [Rupak De Chowdhuri/Reuters]

8 Aug 2019 – On August 5, the Indian government announced it was scrapping Article 370 of the constitution, which effectively abrogated the autonomy of the disputed region of Kashmir. For Prime Minister Narendra Modi, this was the most politically opportune time to make the move and secure Kashmir’s “complete integration” into the Indian Union.

Across the world, from Brazil to Italy to the United States, populist leaders like him have launched overt attacks on the rule of law, democracy and equality in their countries without receiving much push-back from the international community. Now, the Indian government hopes that it can also do the same without losing face on the international arena.

The ruling Hindu-nationalist Bharatiya Janata Party (BJP) staged this constitutional coup also on the back of the significant majority it secured in the parliamentary elections earlier this year. Its landslide victory muffled voices of dissent in India and even led many international actors, who do not want to alienate the elected leader of the world’s largest democracy, to throttle down their criticism of Modi.

In May, when Modi returned to government, many expressed fears over the future of democracy in India. Today, it is clear that those worries were not misplaced. With his move against Kashmir, Modi proved that he has no interest in the democratic process.

By scrapping an important constitutional instrument, which defined an entire region and its people’s relationship with the Union, without a consultative process, the prime minister showed utter disregard for democratic institutions and processes.

For Modi and the BJP, Monday’s move was simply the natural conclusion of decades-long right-wing Hindu attempts to fully integrate India’s only Muslim-majority state into the Union.

Integration of Kashmir has always been an important talking point for India’s right-wing politicians; until Modi, however, those ambitions were kept at bay and political action remained within the national consensual framework on Kashmir. Thus, for decades the oppression of Kashmiris went on, but the special status of their state remained.

After securing a majority in the parliament for a second term, the BJP started to look at the region in terms of numbers.

Prior to Monday’s decision, Jammu and Kashmir state was allocated just six parliamentary seats out of 543. Both in 2014 and 2019 the BJP won three of these six seats – the ones in Hindu-dominated constituencies.

In light of all this, the BJP likely made the calculation that it has much to gain and nothing to lose by dealing the death blow on Muslim-majority Kashmir and revoking its special status. This strategy of intensifying attacks on India’s minorities, chiefly Muslims, to pump up Hindu-nationalist sentiments of the public has worked wonders for the party in the past.

Since 2017, when the BJP secured a startling majority in India’s most populous and electorally largest state, Uttar Pradesh, the party has been trying to widen its support base by selling the idea that Modi is “fixing” India’s “Muslim problem”. Now it is the turn of Kashmiris to be “sorted out”.

And what the BJP was hoping for indeed happened: A great number of Indians cheered their government on, as it disenfranchised an entire region and its people. For many who saw the move as a “victory” or even a conquest, August 5 was a day of celebration.

While the BJP was always expected to play the grappler in Kashmir, support lent to the government by a horde of regional opposition parties is indicative of the increasing sway of majoritarianism in India.

These parties, many inimical to BJP and locked in direct conflict with it for political influence, are apprehensive of further political marginalisation if they did not endorse the government’s move to revoke Kashmir’s special status. Distressingly, there is growing support for the BJP’s belief that India can only find harmony and prosper at the expense of Kashmir’s disintegration and the disempowerment of its people.

The government’s decision to revoke the constitutional clause that gives Indian-administered Kashmir special status will undoubtedly lead to further alienation of the almost 13 million Kashmiris living there.

Even at the best of times, the relationship between the Kashmiri people and the rest of India was defined by a rhetoric of “us vs them”. The BJP’s latest move will only serve to deepen the distrust and enmity the two sides feel for each other.

Article 370 of the Indian constitution, which gave Kashmir its special status, was not a useless footnote written in incomprehensible legalese. Instead, for seven decades it served as an important reassurance for Kashmiris who agreed to remain under India’s control on the condition that they would have greater autonomy within the Indian Union.

The government has secured a parliamentary approval to divide the Jammu and Kashmir state into two centrally governed union territories. This means Kashmiris will not only lose their independent constitution, but also their local government and legislative assembly. Hereafter, they will have to make do with a legislature which will remain under the control of a central nominee – a development that undermines the Indian federal structure.

As Kashmir remains virtually cut off from the outside world, with phone lines and internet disconnected and thousands of troops enforcing a curfew, we are yet to witness the Kashmiri reaction. But given the region’s decades-long history of proud resistance in the face of political alienation, violence and repression, it is almost certain that Kashmiris are not going to take this latest assault lying down.

Former chief minister of Jammu and Kashmir Mehbooba Mufti was right to call August 5 the “darkest day in Indian democracy“. What happens next will have detrimental consequences not only for Kashmir but for the whole country. Many members of the Hindu majority may be cheering today but Modi’s onslaught on democracy will affect them as well, sooner or later.

Nilanjan Mukhopadhyay is a Delhi based writer and journalist with a special interest in Hindu nationalistic politics.