Foreign Aid for Rwanda, Suffering for Rwandans and Congolese 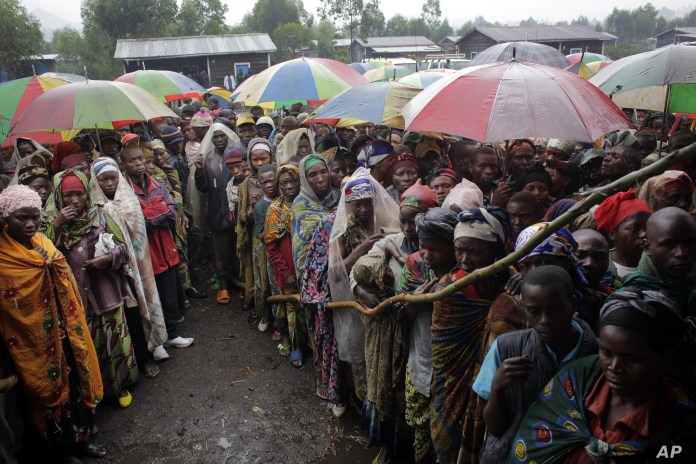 3 Sep 2019 – Rwanda received roughly “$1.22 billion” in development aid in 2016-2017, the most recent year for which Official Development Aid (ODA) numbers are available on the website of the Organization for Economic Cooperation and Development (OECD). The US was Rwanda’s top bilateral donor that year, giving $177.6 million, but Trump drastically reduced aid to the tiny East African nation. In December 2017, Rwandan-Canadian economist David Himbara, a former member of Rwandan President Kagame’s cabinet, wrote:

“Kagame-Trump relationship does not look good. When the American head of state invited African leaders at the United Nations in September 2017, Kagame was not among the invitees. The Rwandan dictator was deliberately left out in the cold. The issue seems to revolve around the fact that Kagame is the Clintons’ darling – which is a no-no with Trump.”

Himbara added that Rwanda would not be the only African nation facing reduced US aid because Trump had slashed the State Department’s overall budget. 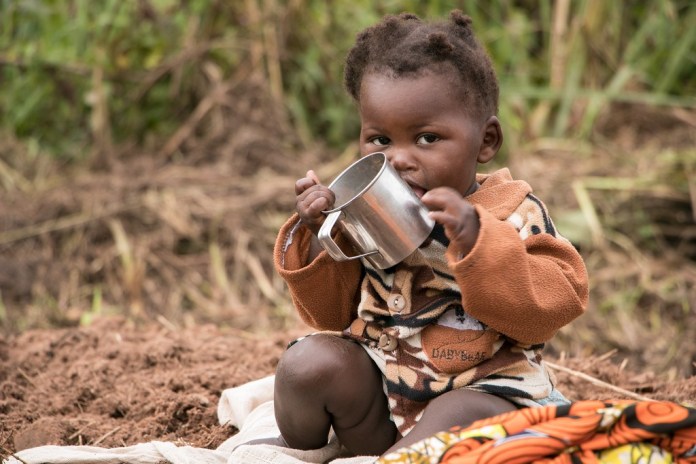 Rwanda’s growth and poverty stats are Kagame’s own

Before Trump took office, the US, and most particularly its freelance envoy Bill Clinton, often boasted of US aid’s good effects in Rwanda by pointing to President Paul Kagame’s statistical fabrications about economic growth and decreasing poverty. On Aug. 12, however, the Financial Times (FT) published a report titled “Rwanda: where even poverty data must toe Kagame’s line.” (The article is paywalled, but Global Post has reposted it.)

FT researchers analyzed data and concluded that poverty in Rwanda had actually increased by at least 6 percent during a period when the government said it had decreased. Last week BBC Radio’s Business Daily followed up with a report titled “Can we trust Rwanda’s data?” which affirmed the FT’s conclusions and also reported that aid given to help Rwandans switch from local food production to market production had actually impoverished farming communities and enriched middlemen.

In July 2016, a headline in The East African read, “Famine hits over 100,000 Rwandan families in Eastern province.” The report said that rural Rwandans were fleeing famine across the Rwandan border into Uganda.

The BBC spoke to Rwandan-Canadian economist David Himbara, who said that when he was a minister in the Rwandan government, President Paul Kagame would give his cabinet officials orders as to the statistics he wanted them to report:

David Himbara: Basically, there are no credible statistics in Rwanda because the president decides what he wants and then the rest of government gives him what he wants to see. [Kagame says,] “I want to have grown by 11 percent last year.” [His ministers say,] “Yes, sir, that’s how much you grew.”

BBC: The president would simply say this is the number that will describe, let’s say, economic growth, and then an official would say, “It will be so.”

DH: Yeah. Let me give you an example. In 2009 I was in this meeting where you had economic ministers, like ministers of finance, agriculture, trade and industry. In this meeting, the president said he wanted to have grown by 11 percent. The minister of finance at the time, he said, “Sir, in fact, you grew by 11.5 percent.”

Then when it came to my turn, I said, “It’s not possible. It’s not credible because in 2008 the whole world was upside down. There was a financial meltdown.” And he said, “Who are you [to deny me]? Just shut up.”

BBC: So your objections were overruled. 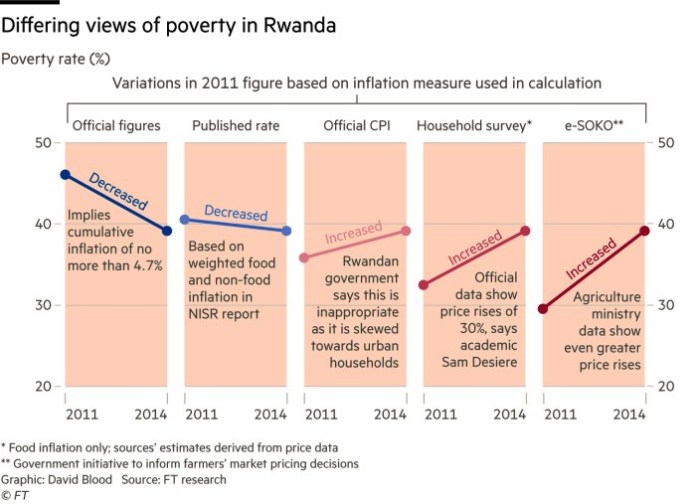 Donors are complicit in Rwanda’s occupation of DRC

Whether donors contribute to general budget support or earmark funds for poverty relief and other alleged good works, they inevitably fund Rwanda’s ongoing, catastrophic occupation of DRC (Democratic Republic of Congo), where more than four and a half million of 81 million Congolese are among the country’s ever-growing population of “internally displaced persons,” aka internal refugees. Four and a half million was the Office of the UN High Commissioner for Human Rights (OHCHR)’s best estimate at the conclusion of 2017.

In 2016-17, Rwanda received less than 2 percent of foreign aid as direct budget support, although 8.41 percent were vaguely earmarked as “multi-sector.” Direct budget support and conceivably multi-sector support were funds that Kagame was able to use as he saw fit, including Rwanda’s ongoing occupation and plunder of DRC.

Other funds were earmarked for education, health, agriculture and other domestic sectors. However, even if earmarked funds are indeed spent as earmarked, they indirectly fund the occupation and plunder by taking care of domestic goals and projects, however Kagame defines and implements them. Funds Kagame does not have to spend in Rwanda are free for aggression in Congo. This is the same obvious, ipso facto, sky blue, grass green conclusion that has appeared in annual reports by the UN Group of Experts on the Democratic Republic of the Congo.

In addition to aid donated for allegedly good works in Rwanda, which are not represented in OECD statistics, the US is a longtime contributor to Rwanda’s military budget, and has long described Rwanda as a “military partner” in the US Africa Command (AFRICOM). Trump, in keeping with his determination to turn the US military into a global protection racket, said that he would turn military grants into loans so that they would cost US taxpayers less. 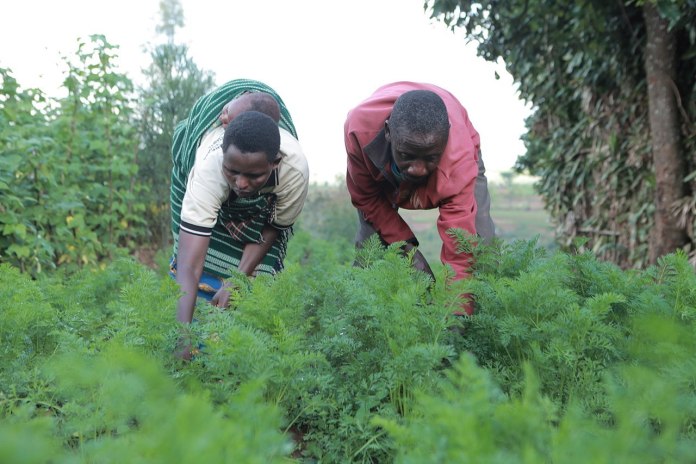 The Financial Times reports that aid given to help Rwandans switch from local food production to market production has actually impoverished farming communities and enriched middlemen. Some farm families have fled to Uganda to escape famine.

Anyone who doubts that Rwanda continues to occupy and plunder DRC should read Congolese author Boniface Musavuli’s latest book, “Beni Massacres: Fake Islamists and Rwandan Unending Occupation,” which has been published in an excellent French-to-English translation.

“This is the context in which we must place the Beni massacres. They are a logical sequel to all other crimes committed by the RPA/RDF [Rwandan Patriotic Army/Rwandan Defense Force] since 1990 in the pursuit of Tutsi hegemony and the two Kivu Provinces in the DRC.

“A major affirmation of Musavuli’s book is that the DRC is a country under occupation and tutelage by Rwanda. When the AFDL [Alliance of Democratic Forces for the Liberation of Congo] entered the country from Rwanda and Uganda in October 1996, it was led by James Kabarebe, a Rwandan military ofﬁcer close to Kagame. Laurent-Désiré Kabila (LDK), the AFDL leader, had no control over military operations, as they were supervised by Kabarebe. When LDK broke with his mentors in July 1998, he made the mistake of retaining Joseph Kabila, who is apparently related to Kabarebe and once served as a Rwandan intelligence ofﬁcer. The creation of the Rassemblement Congolais pour la Démocratie [Rally for Congolese Democracy] in August 1998 allowed Kigali to send back most of the soldiers who had come to the Congo with the AFDL, many of whom are still officers of the Armed Forces of the DRC (FARDC) today.”

Life is hard in the Rwandan countryside.

The atrocities that M23 committed in DRC caused such international outrage that it finally spurred the US and the UN Security Council to action, but their solution was ultimately as fraudulent as the Congolese names of Rwandan and Ugandan forces in DRC. The UNSC deployed a UN combat brigade to chase M23 back into Rwanda and Uganda, where they “surrendered” to the Rwandan and Ugandan governments. This was like saying that during the US Civil War, the Union Army chased Confederate troops back into the Deep South to surrender to Robert E. Lee.

Then US billionaire investor Howard Buffett (son of Warren), who has resource interests in the region, paid for a “peace conference” in Uganda, which concluded with DRC and M23 signing a contractual “Declaration” including this Article 10:

“The government [meaning the DRC] reaffirms its determination to finalize the implementation of the commitments that have been made under the agreement of March 23, 2009, signed with the CNDP.”

On Jan. 2, 2014, less than a month after DRC signed away the store to Rwanda and Uganda, the country’s beloved Colonel Mamadou N’Dala Moustafa, who had led the military defeat of M23, was assassinated in Congo’s Beni Territory, in a fiery attack on a vehicle he was traveling in.

I asked David Himbara how Kagame fits all the money gained by plundering Congo’s immense resources into his budget. He replied, “DR Congo money does not go into the Rwandan economy. The loot goes into offshore accounts of Crystal Ventures Ltd and its owner Kagame.”