5 Sep 2019 – Almost two million residents of Assam, a state in India’s northeast, have been excluded from the Indian state’s reactionary National Register of Citizens (NRC). These de facto “foreigners” are now under threat of being herded into detention centres prior to their mass expulsion.

Moreover, if India’s Hindu supremacist Bharatiya Janata Party (BJP) government has its way, the process under which all of Assam’s more than 33 million residents have had to provide documentation demonstrating their right to citizenship to the authorities’ satisfaction, or be targeted for deportation, will be extended throughout the country—that is, to all of India’s 1.3 billion people.

Almost all of the 1.9 million people who have been excluded from the NRC—some 6 percent of Assam’s population—are Bengali-speaking, and more than 90 percent of them are impoverished Muslims.

Fearing mass protests against its attempt to declare a substantial fraction of Assam’s Bengali-speaking minority stateless, the BJP central government deployed more than 145 companies of the Central Armed Police Force (CAPF) across the state prior to the publication of the “final” NRC list last Saturday [31 Aug]. 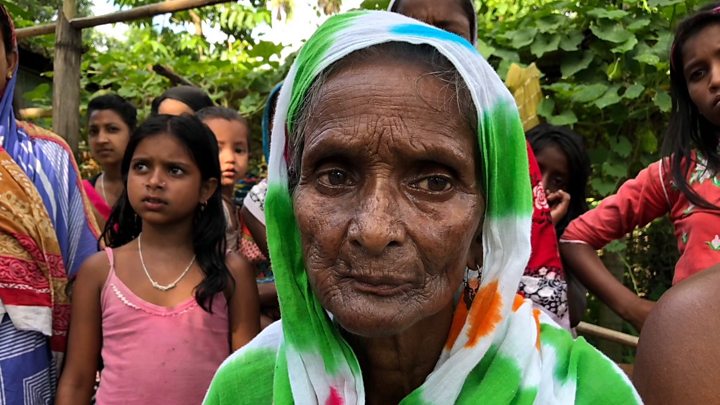 India has published a list which effectively strips some four million people in the north-eastern state of Assam of their citizenship. BBC

A preliminary NRC list published in July 2018 excluded 4.1 million people. The state unit of the BJP and its principal partner in Assam’s government, the ethno-chauvinist Asom Gana Parishad (AGP-Assam People’s Association), have criticized Saturday’s “final” NRC for not targeting far more Bengali-speakers for deportation. “The AGP is not satisfied at all about the number of exclusions … [it] is far too low and we cannot accept that,” declared party chief and Assam cabinet minister Atul Bora.

The stated aim of the NRC is to root out and expel all those who cannot prove that they or their ancestors lived in India prior to March 24, 1971. Thus by design, the vast majority of those who have been deemed “foreigners” were born and have spent their entire lives in India, or at the very least have lived there for decades. However, human rights groups have documented numerous instances of people whose families have lived in Assam for generations, and thus fulfill the state’s reactionary citizenship criteria, but have nevertheless been excluded from the NRC due to the authorities’ communal malevolence and incompetence.

The NRC process has sparked opposition and outrage in India and internationally, with even the western press, which never tires of celebrating India as the “world’s most populous democracy,” publishing critical reports.

On Sunday, Indian External Affairs Ministry spokesperson Raveesh Kumar tried to paint the publication of the NRC as essentially a non-event. He denied those excluded from the NRC have been rendered “stateless” or designated “foreigners.” “Exclusion from the NRC,” said Kumar, “has no implication on the rights of an individual resident in Assam. Those who are not in the final list will not be detained … till they have exhausted all the remedies available under the law.”

All this is lies—a transparent attempt to dress up a state-engineered ethnic-cleansing campaign as lawful, restrained, even humane.

The right-hand man of Prime Minister Narendra Modi, BJP President and Home Minister Amit Shah, has repeatedly described “illegal” immigrants as “termites” and vowed to drop them in the Bay of Bengal.

Six detention camps already exist in Assam, most of them within district jails, and almost a dozen more are reportedly under construction.

The NRC process has already caused enormous anxiety, distress and hardship, as poor, often illiterate people have scrambled to come up with documentation to convince hostile government appointees that they should not be excluded. Now, under conditions where the state government has publicly declared that it is dissatisfied that “only”1.9 million have been denied citizenship, those excluded from the NRC will have to go before one of the more than one thousand newly-established “Foreigners Tribunals” to try to convince the authorities that they meet the reactionary NRC criteria. Should they fail, theoretically they can appeal to the courts, but every step of this process involves spending money that most don’t have. 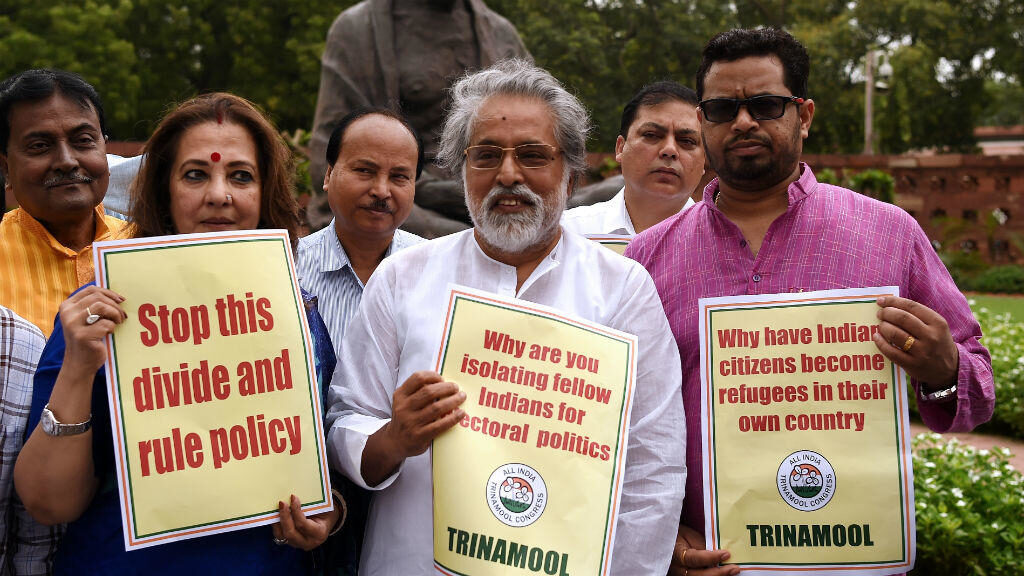 The Modi government’s whipping up of hostility against immigrants, like its promotion of “cow protection,” the building of a temple to the Hindu god Ram on the site of the razed Babri Masjid in Ayodhya, and other Hindu communalist causes, is aimed at deflecting mounting anger over mass joblessness, chronic poverty and agrarian distress into reactionary channels.

The BJP’s anti-Bengali campaign in Assam, it should be added, has a pronounced anti-Muslim communalist thrust. In line with its vile Hindutva-ite ideology which defines India as a Hindu nation, and in keeping with its plans to transform into a Hindu rashtra or state, the BJP has brought forward legislation to grant Hindus who have migrated to India from Bangladesh citizenship, while denying it to Bangladeshi Muslims, on the claim that the former have fled persecution. But when it comes to the Rohingya fleeing ethnic-cleansing in Burma, the BJP government is adamant that none will be granted asylum, let alone citizenship.

The Indian state’s foul and shameful actions in Assam echo its actions in Jammu and Kashmir (J&K) and underscore that India’s ruling elite, like its counterparts around the world, is increasingly using authoritarian methods of rule and cultivating communalist and fascist reaction.

One month ago, the BJP government mounted a constitutional coup, illegally stripping J&K of its special, semi-autonomous status under India’s constitution by executive fiat. It then bifurcated what had been India’s lone Muslim-majority province, and reduced the two parts to Union Territories, placing them under permanent central government trusteeship. This was accompanied by the imposition of a state of siege on J&K that continues to this day. For the last month J&K’s 13 million people have been denied cellphone and internet service; tens of thousands of Indian army troops and paramilitaries have imposed curfews and otherwise restricted people’s movements; and thousands have been detained without charge.

Although in recent years Modi, Amit Shah, and the BJP-led Assam government have championed the NRC, the rendering of 1.9 million people stateless is the outcome of a long process that predated the rise of Modi and his BJP to power in New Delhi in 2014.

Indeed, the Indian state and the entire Indian political establishment are complicit.

The “updating” of the NRC in Assam was ordered by the Supreme Court in 2014. It has been conducted since its launch in 2015 under the Court’s supervision, and in conformity with an agreement reached 34 years ago, in 1985, between Rajiv Gandhi’s Congress Party government and the ethno-exclusivist All Assam Student’s Union (AASU)-led Assam Movement. The Assam Movement, out of which the BJP’s current governmental ally the AGP emerged, had mounted a violent, years-long agitation against “Bangladeshi immigrants.”

Ultimately the campaign targeting Assam’s Bengali-speaking minority is yet another perverse outcome of the reactionary 1947–48 communal Partition of South Asia into an expressly Muslim Pakistan and a predominantly Hindu India. Accompanied by horrific violence and mass population transfers, Partition erected state borders that cut across regions and peoples that had been economically and culturally united. It has frustrated economic development, given rise to the reactionary Indo-Pakistan military-strategic rivalry that today threatens the people of the subcontinent with nuclear war, and has facilitated continued imperialist oppression of the region.

There has long been a Bengali-speaking population in Assam. But it has grown since Partition, as migrants sought to escape endemic poverty in East Pakistan and find refuge from the vicious assault the Pakistani military mounted in 1971 to thwart the Bangladeshi revolt against Islamabad’s oppressive rule. India intervened in December 1971, casting itself as the “liberator” of the Bangladeshi masses. In fact India invaded Bangladesh to uphold South Asia’s reactionary communal-based state system, and to deliver a body-blow to its Pakistani rival.

The Assam Movement was one of a series of exclusivist movements that developed in the 1970s and 1980s in the northeast, a region that the Indian bourgeoisie traditionally both neglected and plundered.

The AASU accused “illegal immigrants” from Bangladesh of “plundering resources,” “taking jobs” from Assam residents, and threatening Assamese cultural dominance in a state inhabited by a host of ethnic groups. The six-year Assam agitation was marked by violent racialist attacks, in which some 1,800 people, mainly poor Bengali-speaking Muslims, died.

A key element in the Assam Accord was the provision now being implemented to deny citizenship to all those who could not provide documents proving that they or their families lived in India before March 24, 1971, the date of the first major massacre perpetrated by Pakistani troops in East Pakistan/Bangladesh.

The Stalinist Communist Party of India (Marxist) endorsed the chauvinist 1985 Assam Accord. Today, like the Congress Party, it supports the chauvinist witch hunt of Bangladeshi migrants, saying only that steps must be taken to ensure that “all Indian citizens” are duly entered in the NRC—i.e., those whose residence in India can be traced back more than 48 years ago.

One Response to “India Labels 1.9 Million Assam Residents “Foreigners” as Prelude to Their Mass Expulsion”