Pakistan Is No Friend of Kashmir, Either 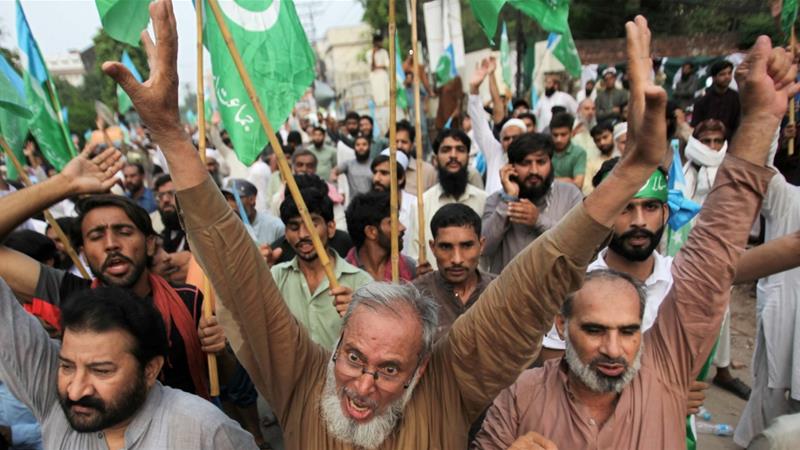 People chant slogans during a rally expressing solidarity with the people of Kashmir in Lahore, Pakistan, August 6, 2019.
[File: Mohsin Raza/Reuters]

11 Sep 2019 – In a recent opinion piece penned for the New York Times, Pakistani Prime Minister Imran Khan asked the world to wake up to the conflict in Kashmir because if it does not, there is a risk of a nuclear war between India and Pakistan. Like previous Pakistani premiers, he sought to present Pakistan as a champion of the Kashmiri cause.

While the world indeed needs to take action on ongoing crackdown and rights abuses in India, it should not overlook the role Pakistan has played in the Kashmiri tragedy.

Over the past decades, it has shown little commitment to Kashmiri self-determination.

When India and Pakistan gained independence from Great Britain in 1947, Kashmir was a princely state which wanted to remain independent, a choice given by the colonial masters to all such entities and agreed upon by both countries.

Pakistan even signed a standstill agreement with the Kashmiri Hindu ruler of that time, Maharaja Hari Singh, which basically meant it agreed to its status as it was. However, a few months later, Pakistan broke that agreement and helped Pashtun tribesmen invade the region, eventually sending its own security forces to Kashmir in a bid to take over the valley.

In response, the Kashmiri ruler asked India for help to defend his kingdom. New Delhi agreed to intervene but only if Kashmir would agree to accede to it, albeit temporarily. The conflict escalated into what has come to be known as the Indo-Pakistani War of 1947-1948, which led to the de facto partitioning of the region by Pakistan and India.

In 1948, the United Nations passed a resolution, according to which Pakistan was supposed to withdraw its forces first (as it acted as an aggressor), while India was to maintain a minimum military presence until an independence referendum was held to let Kashmiris decide their own future. However, neither India nor Pakistan abided by that resolution.

Then in 1965, the Pakistani military launched a secret mission called Operation Gibraltar which involved military officials infiltrating the valley and attempting to engineer a rebellion from within by mixing themselves with the locals.

The calculations by General Ayub Khan, the Pakistani dictator who was in power at that time, were that since India had just been exhausted by the Sino-Indian War of 1962, there was a good opportunity to take New Delhi by surprise. However, Operation Gibraltar failed to rouse the local population, and instead India launched a counter-offensive, forcing Pakistan to retreat.

Paradoxically, every year on September 6, Pakistan marks its “victory” over the Indian army attacking its territory in 1965. The official narrative does not mention Operation Gibraltar which effectively triggered the conflict.

Then in the aftermath of the 1987 election in the valley, which was widely perceived as rigged, massive agitations broke out in Indian-administered Kashmir, which Pakistan supported. In the wake of these protests, Jammu Kashmir Liberation Front (JKLF) had taken centre stage and become the leading voice for Kashmir’s armed resistance.

A few years later militants based in Pakistan headed towards Kashmir and started to target and kill the leadership of pro-independence groups like the JKLF, leaving behind mostly pro-Pakistani militancy in the region.

Then in 1999, Pakistan once again attempted to infiltrate the valley using its military in what came to be known as the Kargil War.

In the following two decades, Pakistan-based groups have been repeatedly accused of carrying out terrorist activities, not just in Kashmir but also in mainland India. From the 2001 attack on the parliament in New Delhi to the Mumbai attack in 2008, to recent attacks in Pathankot and Pulwama, these aggressive tactics have sealed India’s perception of the Kashmiris through the lens of its historic confrontation with Pakistan.

With its past actions and hesitancy to crack down on militant groups in its territory, Pakistan has given India repeatedly the opportunity to present the unrest in Kashmir to the world as nothing more than a Pakistan-backed insurgency. This has effectively undermined the struggle of the local population of Indian-administered Kashmir.

At home, Pakistan has also not been too keen to accommodate Kashmiri people political rights and has targeted pro-independence group like JKLF.

Also, most of the bureaucracy and civil service is controlled by Islamabad, and a body called the Kashmir Council headed by the Pakistani prime minister oversees all government affairs. Moreover, Pakistan has made efforts to absorb the region into Pakistan by carving out parts of its territory – the Gilgit-Baltistan (GB) region – and by creating a separate entity for it in the 1970s.

The Pakistani authorities took away GB’s special status and until today it is mostly governed by Islamabad directly.

If Pakistan is sincere about the Kashmir cause and cares for the wellbeing of its people, then it must first demonstrate its commitment at home. It can do so only by putting an end to rights abuses and letting Kashmiris decide their own fate. Only then will the world take Pakistan’s concerns about Kashmir seriously.

Taha Siddiqui is an award-winning Pakistani journalist living in exile in France.