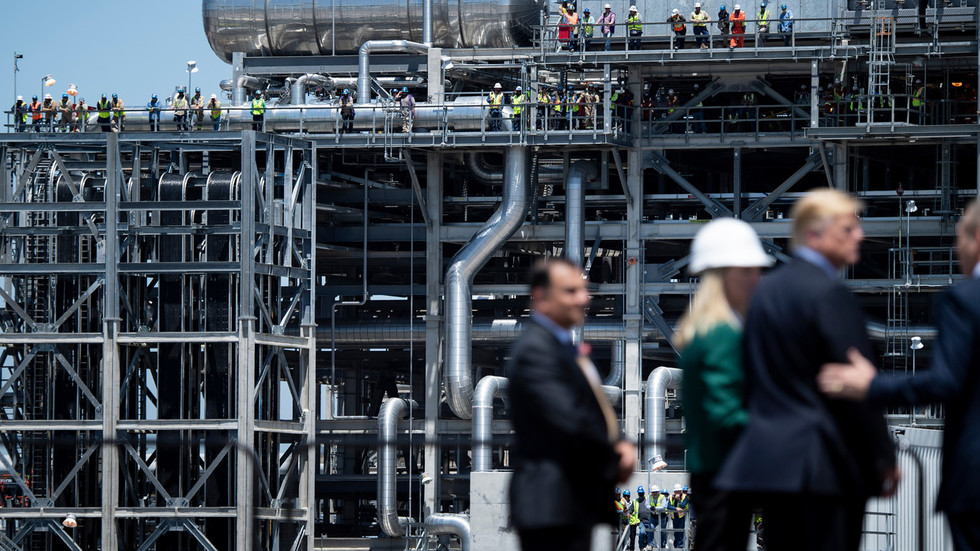 26 Sep 2019 – The US has apparently learned it can use its leverage over natural resources to pursue a geopolitical chess game which sees it heavily countering Russia’s influence over the future of the energy markets.

If you look closely enough, the ulterior motives driving Washington’s foreign policy agenda are readily apparent even in the mainstream media.

“Our great supply of natural gas is a boon for geopolitical leverage,”

“We saw in the Middle East last week how energy production and distribution plays into geopolitics. With so much natural gas, we can work to counteract Russian leverage in Europe, we can supply allies and we can free ourselves of some unnecessary foreign entanglements.”

For years, myself and like-minded individuals have attempted to highlight that US-led wars are almost solely driven by oil, natural gas, money, and geopolitics. For a while, we were labeled as conspiracy theorists, or terrorist sympathizers, or what have you, but following former Secretary of Defense Chuck Hagel’s comments that “people say we’re not fighting for oil. Of course we are,” this mantra became a lot harder to maintain.

Even Donald Trump openly suggested the US hadn’t gone far enough in its bid to plunder and control the world’s oil supply (twice).

Despite these many admissions – and believe me, I could write an entire book on this topic – the issue is always framed by the mainstream media in different terms, particularly when it comes to foreign adversaries and the geopolitical significance of oil and natural gas.

“Russia Uses Its Oil Giant, Rosneft, as a Foreign Policy Tool” claims the New York Times. In this article, the writer alleges that “Russia is increasingly wielding oil as a geopolitical tool, spreading its influence around the world and challenging the interests of the United States.”

So, if Russia is doing it, it’s a big scandal worthy of a New York Times opinion piece. If the US is doing it – well, it turns out that the US isn’t doing it enough, according to some writers. Western writers encourage the United States to do the very thing they are accusing – and denigrating – Russia for doing.

But no, it doesn’t stop there.

“Belarus Is Latest Target of Russian Use of Oil and Gas as Geopolitical Weapons,” writes the Huffington Post.

Russia is a “global energy powerhouse that’s much more than a petro-state,” the Conversation explains.

It really isn’t going unnoticed, given the amount of articles out there on this topic. But we really don’t see this kind of analysis when it comes to the US and its ability and desire to exploit natural resources to achieve geostrategic outcomes. In fact, when the shoe is on the other foot, the headlines are wholly different.

“US Natural Gas is the New, Global, Soft-Power Weapon,” explained the National Interest earlier this year.

Let’s face it, lexical semantics matter. When it comes to the US, natural gas is a soft power weapon which it should weaponise. In the case of Russia, natural gas is being weaponized, and this should concern and worry us all. And no, I am not overstating this at all. Consider this paragraph from the aforementioned National Interest article, which reads:

To put it bluntly, corporate media are essentially saying the following: “Russia weaponises energy resources for geopolitical adventures. The United States has a duty to weaponize energy resources in turn for its own geopolitical adventures.” Seriously, the US can export Liquefied Natural Gas (LNG) to countries on Russia’s border, such as Poland, but Russia should not be attempting to develop a natural gas pipeline with Germany (how scandalous by the way).

As much as Trump is a Russian asset (if you are still naïve enough to believe that), this is one area that even he seeks to heavily disrupt and further alienate Russia over. As much as the US president has stated he wants to “protect” Germany from Russia, I still feel as though Germany is old and wise enough to make these kinds of decisions for itself.

Seriously, why even bother making the accusations against Russia in relation to the use of natural resources as a geopolitical tool to further one’s agenda, when the US is notorious for doing just that? These accusations are meaningless when the accuser lives in a glass house, throwing tiny pebbles out into an open garden full of hypocrisy and double standards.

In this sense, geopolitics is more than just a global chess game: it is a sports game. The teams are East v West, and we must pick a side. You are either with us or against us. Our failures to secure the transition of puppet governments in Syria and Iran, as well as our inability to maintain puppet governments in Iraq and Syria, mean that Russia will sooner or later start to fill the void. But – and correct me if I’m wrong – if Russia following a foreign policy agenda of its own is inherently bad, it would have to make that same foreign policy agenda of the United States equally bad.

In the case of the US, through official documents and leaked cables we actually know the foreign policy agenda and its relation to natural resources. We even know that powerful people support the use of extremist terror groups to achieve those ends. At no stage is this deemed scandalous or worthy of discussion.

If we’re doing it, it’s okay. If we suspect Russia is doing it, sound the alarm, and encourage the US to pursue an even greater geostrategic policy of weaponizing natural resources to counter and contain Russia.