The World Is Burning! 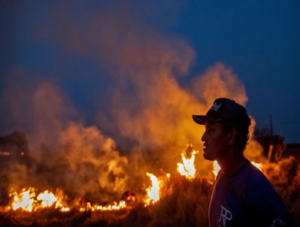 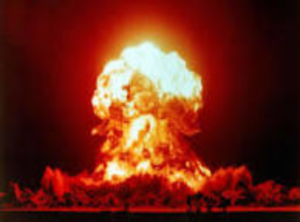 28 Aug 2019 – The heart wrenching fires in the Amazon. Africa, Australia, the US continent, Europe, etc. and increasingly right here in Hawaii are not “wild” fires.  These fires along with increasing global temperatures are signaling the path toward global destruction due to human made climate disaster.  More people are beginning to see, especially in view of the thousands of fires in the Amazon rain forests, that these are fires bred by greed and the disregard for the sacredness of what people rightly call the “lungs of the earth.”

These same forces of uncontrolled greed and disregard for the sacred, are also fueling increasing military conflicts for control of resources and corporate profits.  The  U.S. is discarding international environmental and peace treaties and escalating a new arms race that is also on the path to global disaster — nuclear war.  The US has plans to spend a TRILLION DOLLARS on nuclear weapons in the coming decades with nuclear weapons becoming more hair-trigger and usable.  Already the US spends more on war and militarism than the next ten countries combined. Add that with US fueled increasing global chaos and instability, along with the unstable nature of the current White House occupant, and the writing is on the wall –Big Big Trouble ahead!

Where do we go from here in the face of such dire consequences staring us in the face?  In my view – we need to look to the wisdom of Native People and relearn what it means to reconnect with the earth and all that is sacred.  Here in Hawaii we have the Native concept of Aloha ‘Aina (Love for the Land)  and Malama i ka ‘aina (Take Care of the Land).  Hawaii, before U.S. occupation, was a self-sustaining society of more than a million people by some estimates.  Today, more than 90% of food consumed in Hawaii is imported and Hawaii’s native people have been displaced from the land by commercial corporate interests and US militarism.  Hawaii has become a bastion of US military bases and a training ground for global nuclear war.  Strategic nuclear bombers, some deployed from Joint Base Pearl Harbor – Hickam practice bombing at the 133,000 -acre military Pohakuloa Training Area (PTA) located in the center of Hawaii Island.  Hawaii’s Native People’s most Sacred site — Mauna a Wakea, is facing an unprecedented challenge to be protected from further desecration by a 14th telescope — an 18 story Thirty Meter Telescope (TMT).  Native Hawaiians are also leading the effort to protect Pohakuloa from further bombing desecration.

Non Hawaiians need to stand in solidarity with Native Hawaiians in their efforts to Protect Mauna a Wakea, Pohakuloa, etc.  Justice and peace go together.  There can be no peace without justice. Hawaiians have already paid a heavy price to the illegal U.S. occupation of the Hawaii nation.  It is time non-Hawaiians step up and shoulder the burden of preventing further harm, and join in protecting the people and land of Hawaii.