What the US Sanctions against Venezuela Have Wrought

The United States’ sanctions against Venezuela continue to punish ordinary Venezuelans while deepening the country’s political crisis. They need to end. 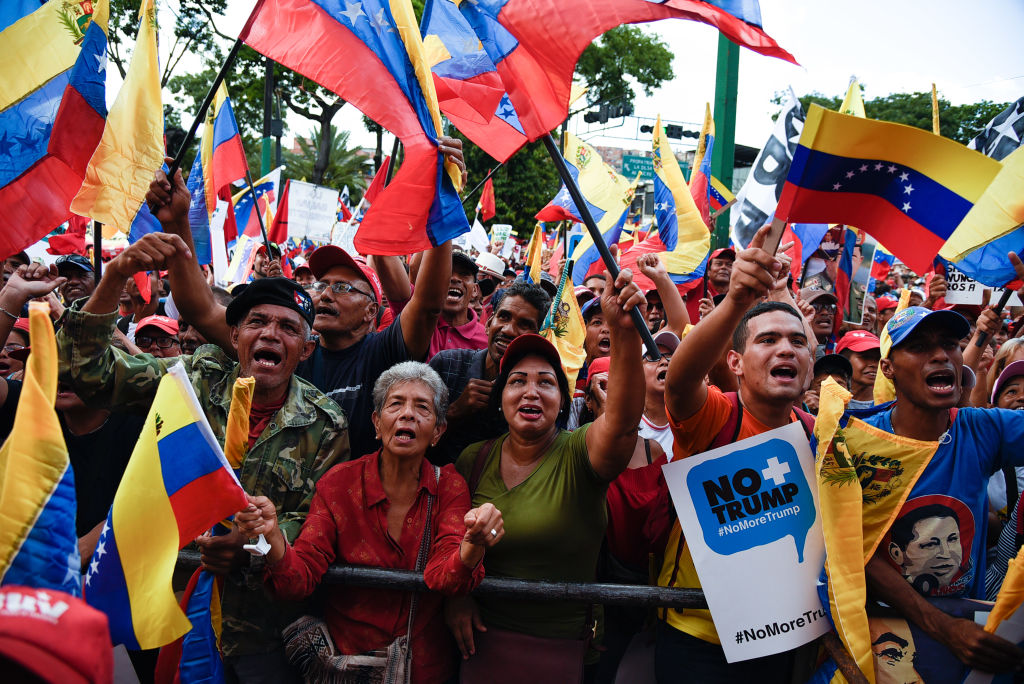 22 Sep 2019 – In early August, the Trump administration ramped up economic sanctions on Venezuela, freezing foreign assets and blocking companies from doing business with the Maduro government. As was to be expected, the executive order was accompanied by grandstanding by members of the Trump administration who argued that the move would “accelerate a peaceful democratic transition.”

These new sanctions made quite the boom when announced, and understandably so. David Smilde, senior fellow at the Washington Office on Latin America, has described similar, but less extensive, sanctions as a “nuclear” option. In the following weeks after the order was issued, a flurry of reports and opinions were published, speculating on the sanctions’ potential long- and short-term economic impacts.

On the ground, the new round of sanctions accelerated disparities between the US dollar and the bolívar soberano on the black market. In late July, the exchange rate hovered around 8,000 bolívares per dollar. By late August, this had risen to 20,000 bolívares. Using this black-market rate, minimum wage in the country is now at two dollars a month.

At the same time, on a day-to-day basis, the sanctions seem to be almost undeserving of discussion. Rather than a bomb, the sanctions are perhaps better described as a blip on the radar. In the words of one friend, a single mother and state employee, “Who has time to panic over esta vaina?”

Venezuelans are, of course, concerned about the sanctions. Even for those unsure of what the sanctions actually entail, they are clear on one point: the sanctions are going to make life much more expensive. However, since long before this new round of sanctions, people have expected prices to increase on a weekly, and even daily, basis. Venezuelans already factor in rapid increases in the exchange rate when considering how far their money will — or won’t — go for the month. Yes, the sanctions have accelerated increases in prices and the cost of the dollar. But this is a change of degree, not kind.

It’s Not Just the Economy, Stupid

Sanctions carry with them many social and political implications, apart from the effects they have on the economy. Indeed, there was significant political fallout after the Trump administration made its announcement. Nicolás Maduro left the negotiating table in Barbados, which, given the timing, was likely a goal of an administration that has little faith in a negotiated end to the current crisis. And though new negotiations are in the works, the sanctions undoubtedly rolled back any progress that had been made by political actors to find some middle ground.

The sanctions highlight a larger political problem that the Trump administration’s relationship with the opposition coalition has produced. It is evident that the Trump administration’s principal interlocutor is Voluntad Popular, the party of Juan Guaidó and his mentor, Leopoldo López. Despite the fact that López is an extremely polarizing figure, considered by many to be one of the most reactionary voices of the opposition, the relationship between Voluntad Popular and Trump has begun to define the coalition’s strategies and has created an expectation of support for measures, like the sanctions, over which many in the opposition are divided.

Indeed, punitive, unilateral measures such as these tend to have a dampening effect on democratic procedures, forcing people to draw lines in the sand and rally around intransigent positions. Shortly after Washington announced the sanctions, Guaidó named a new “cabinet.” With López at the helm of the group, little room is left for discussion among leaders about what stance to take on the sanctions. Such polarizing policies ratchet up tensions, justifying the authoritarian position that, for now, there is no time for debate, discussion, and popular participation.

With each new raising of the stakes, political discourse becomes an increasingly zero-sum game. While the Guaidó-led opposition has remained silent on the suffering the sanctions will cause, some Chavista politicians have used the sanctions as means to enforce loyalty. For example, shortly after Trump signed the executive order, videos and social media messages announced that those who did not sign a circulated document against the bloqueo could be denied CLAP boxes, an indispensable — albeit inconsistent — source of food for many in the popular sectors. And for social movements and political parties, it becomes increasingly difficult to thread the needle between criticizing sanctions and the US government while at the same time positioning themselves against the Maduro government.

Sanctions and Signaling Where the Country Stands

Sanctions also have less “visible” impacts, enforcing restrictions and constraints often missed in economic analyses, but that have profound effects on morale and how Venezuelans evaluate the state of the country. Take something as simple as baseball. In response to sanctions, US Major League Baseball (MLB) has suspended relations with the Liga Venezolana de Béisbol Profesional, meaning that Venezuelans who play in the MLB will not be able to play in their home country. Keep in mind that baseball has a quasi-religious status in Venezuela. As one Caraqueño put it: “It’s the one thing that Venezuelans have left to enjoy, and sanctions fuck that up too.”

Or take the case of Miguel Pérez (pseudonym), a young welterweight boxer from a poor barrio in Caracas who had the chance to compete in a match in the United States, marking the height of his current professional career. Although Pérez had a visa and was able to travel, his teammates did not have the same luck; their visas were denied. Without his coach and cornermen, and lacking the moral support of his team, Pérez went into the fight demoralized, unable to maintain a competitive advantage. He lost.

Along with demoralization comes disenchantment; with each punitive move the United States makes, cynicism grows and hope for political change contracts.

The degree to which this cynicism has saturated political worldviews was on full display during a dinner conversation we had with friends a few weeks ago in a neighborhood in west Caracas. When the topic of the “embargo” came up in conversation, Susana — an ardent Chavista who has remained supportive but critical of the Maduro government — balked at the suggestion that the opposition wanted negotiations to succeed. However, she held the same criticism of the Maduro government. From her perspective, neither the government nor the opposition care to end the crisis, as both “sides” are enriching themselves despite — or perhaps even partly due to — the crisis.

Of course, it is unlikely that politicians, as Susana believes, want the crisis to continue. If only out of self-interest, they could make out much better with the economy on the mend, depending on the terms of the negotiations. But the perception that the well-being of the people is at best a marginal concern is not uncommon, and sanctions exacerbate this idea.

Accepting responsibility for mistakes and errors, and their consequences, could potentially revive some hope around politics. Hugo Chávez is famously remembered for accepting responsibility for the consequences of a failed coup in 1992, a move that made him stand out among other politicians when he ran for president six years later. For now, though, political parties and their spokespeople continue to play a game of hot potato, doing everything they can to cast blame on the other side.

As for political currency among everyday Venezuelans, neither the government nor the opposition stand to benefit much from these measures. Yes, the sanctions feed into the Maduro government’s criticisms of imperial intervention. And the opposition can try to leverage the lifting of sanctions to bring the government back to the negotiation table. But on the ground, both sides come across as callous in their responses to the sanctions, further detached from the reality of those not included in their respective echo chambers.

Many recognize that sanctions will not incentivize politicians to change course, because they are not the ones who suffer from them. Venezuelans are acutely aware of what policy analysts and academics have been saying since the announcement of the sanctions: the victims are the Venezuelan people.

The situation is perhaps best summed up by an observation a friend made, after sanctions were applied earlier this year: “El partido trancado y el pueblo con la cochina en la mano.” Drawing on a metaphor from domino, this can be translated to: “Those playing the political game have no moves left, and it’s the people who end up being screwed in the end.”

Rebecca Hanson is assistant professor in the Center for Latin American Studies and the Department of Sociology and Criminology & Law at the University of Florida.