30 Sep2019 – Over the past week, congressional Democrats have suddenly discovered their support for whistleblowers. They have rushed to the defense of the CIA agent assigned to the White House who has been at the center of the conflicts within the state over Trump’s call to the Ukrainian president in July.

On Thursday [26 Sep], the House Intelligence Committee released the complaint by the agent claiming that Trump sought to “solicit interference from a foreign country” in the 2020 US elections. 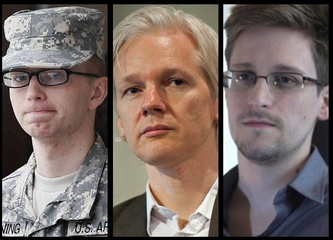 When Trump condemned the author of the report as a “spy,” House Intelligence Committee Chairman Adam Schiff praised him, urging others to “show the same kind of courage and patriotism that this whistleblower has shown.”

All whistleblowers? One might remind Schiff of what he had to say about Edward Snowden, the NSA contractor who in 2013 released documents showing that the NSA and other intelligence agencies had, in flagrant violation of the US Constitution, spied on every single electronic communication transmitted by every American.

In 2016, Schiff wrote a letter to President Barack Obama urging him “not to pardon Edward Snowden, who perpetrated the largest and most damaging public disclosure of classified information in our nation’s history.”

He concluded, “The US government must hold him accountable for his actions.”

Then-Secretary of State John Kerry echoed these sentiments, declaring that Snowden “damaged his country very significantly” and “betrayed his country.”

In retaliation for his disclosures, which resulted in Pulitzer Prizes for the journalists with whom he worked, Snowden faces espionage charges potentially carrying the death penalty. He has been living in forced exile in Russia for six years.

The Democrats under Obama also presided over the jailing of Chelsea Manning in conditions tantamount to torture. The Obama administration oversaw her drumhead military court trial and conviction for the “crime” of helping to expose mass murder by US troops in Iraq and Afghanistan.

Among Manning’s most explosive revelations was the video released by WikiLeaks under the title “Collateral Murder,” which showed a US attack helicopter gunning down civilians in Baghdad, murdering over a dozen people including two Reuters photographers, and injuring more unarmed civilians, including two children.

After having her sentence commuted by Obama at the end of 2016, Manning was re-imprisoned this year, this time without criminal charges, to force her to testify against Julian Assange, the WikiLeaks journalist who published her revelations. She has been imprisoned now for more than six months.

As for Assange, he remains jailed in Britain’s Belmarsh Prison. In addition to exposing massive US war crimes, Assange and WikiLeaks made public the diplomatic intrigues and corrupt relations of Washington with governments around the world, helping to trigger the 2011 popular uprisings in Egypt and Tunisia.

The Democrats hailed the illegal revocation of Assange’s asylum and abduction from the Ecuadorian embassy in London last April at the behest of the Trump administration, with the party’s 2016 presidential candidate Hillary Clinton cackling, “The bottom line is he has to answer for what he has done.”

She echoed the Trump administration’s lie that it was charging the courageous journalist only with hacking. “I think it is clear from the indictment that came out it’s not about punishing journalism,” she said.

She offered no retraction after the Justice Department brought espionage charges against Assange, explicitly targeting his publishing activities and attacking the First Amendment guarantee of press freedom.

The hypocrisy of the Democratic Party is limitless, but it is a hypocrisy that is politically motivated. The attitude of the Democrats to whistleblowers is determined, as with everything else they do, by the interests of American imperialism and the ruling class.

In the case of the CIA agent who has leaked information about Trump’s call with the Ukrainian president in July, the report is part of a bitter feud within the ruling elite that has persisted throughout the Trump administration.

This conflict is motivated above all by divisions over foreign policy. In particular, dominant sections of the state, including Republicans as well as Democrats, are concerned that Trump has failed to take a sufficiently confrontational approach to Russia and that his unilateralist and nationalist geopolitics are cutting across the predatory interests of US imperialism.

It is for this reason that the Democrats have now used the claims of the CIA “whistleblower” to either remove Trump or pressure him to adopt a foreign policy more in line with the intelligence agencies for which they speak.

In the cases of Snowden, Manning and Assange, what is involved are leaks by individuals that have exposed the crimes of American imperialism itself. This cannot be tolerated by any faction of the ruling class, which is why the vicious persecution of these individuals has overwhelming bipartisan support.

Millions of workers and young people rightly hate Trump as a fascistic representative of the American financial oligarchy: the torturer of immigrant children and the builder of concentration camps. But no one should trust the jailers of Manning and Assange and pursuers of Snowden.

The Democrats merely represent a different faction of the same corrupt financial oligarchy that produced Trump. To the extent that the struggle against the fascist in the White House is tied to the Democrats, it allows Trump to posture as an opponent of the “deep state” while he seeks to turn the United States into a personalist dictatorship.

This is inseparable from the fight to defend Manning, Assange, Snowden and all those persecuted by the capitalist ruling class and its political mouthpieces.