Jayaprakash Narayan was an Indian social reformer in the struggle for Indian independence led by Mahatma Gandhi and a social reformer after the independence of India.  J.P. as he was usually called had followed the advice given by Gandhi to refuse schooling financed by the British colonial authorities.  Thus, in 1922 he left India to go to the USA.  With part-time jobs he financed his education at different U.S. universities until 1929 when he received a Master’s degree in sociology from the University of Ohio and then returned to India. 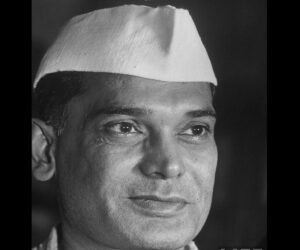 While at the University of Wisconsin, through some professors and a few students, he discovered the writings of Karl Marx and ever after considered himself a Marxist.  As he wrote,

“Marxism provided a beacon of light for me: equality and brotherhood.  Freedom was not enough. It must mean freedom for all – even the lowliest – and this freedom must include freedom from exploitation, from hunger and poverty.”

On his return to India, he went to stay at the rural center where Mahatma Gandhi lived and where he had left his wife.  J.P. had married Prabhavat, whose father was a prominent co-worker of Gandhi.  She was 14 years old at the time and Gandhi and his wife had accepted her as an adopted daughter when J.P. left for the U.S.  While he was away, she took the vow for a life-long abstinence from sexual relations which Gandhi encouraged his followers to take. Thus, she and J.P. had no children.  She was highly devoted to him and an active support during the many years that he spent in jail for his political activities.  Her death in 1973 was a hard blow to him, especially as his health was then declining.

As Bimal Prasad writes in his analysis of the leadership qualities of J.P.:

“While Gandhi led India to freedom and Nehru laid the foundations of a modern, democratic state, it was left to J.P. to go on struggling for the establishment of a social order in India, of which both Gandhi and Nehru had dreamt.  The dominant feature of his political life extending over half a century was a quest for a revolution which would usher in a just social order, enshrining equality as well as freedom.”

In the years prior to Independence, he moved around the country, helping to set up an underground network of activists.  He was first put in jail in 1932 by the British; again in 1940 for 9 months and then moved into a prison camp where he fasted for nearly one month demanding the release of other prisoners.  He escaped from the camp but was re-arrested in 1943 and released only in April 1946 when negotiations between the Indian Congress leaders, especially Nehru and the British were well under way.  J.P. had always stressed that independence could not be granted by England.  Independence could come only by a seizure of power, led especially by peasants. J.P. opposed the idea of dividing British India into India and Pakistan, but his release from prison was too late for him to have any influence on the negotiations. 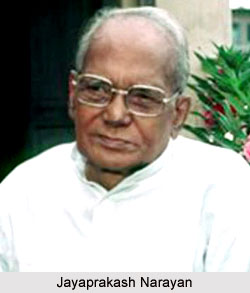 When not in prison, he had organized a Marxist current within the Congress Movement, called the Socialist Congress Party.  J.P. had already in the mid 1930s become highly critical of the Stalinist government of the USSR, its emphasis on State-ownership of heavy industry, its collectivization of agriculture, the “Moscow trials” of former party leaders, and the efforts of Stalin to control all Marxist movements abroad.  Thus J.P. put his emphasis on what he called “Democratic Socialism” and stopped calling himself a Marxist.

J.P. by temperament was not attracted to parliamentary life with its maneuvering for power and position.  He did not stand for elections and refused an offer by Nehru to enter the government as a minister.  He was always an advocate of decentralization and the idea of local leadership in the form of “village republics”.  Thus, when a close co-worker with Gandhi, Vinoba Bhave, began the Bhoodan (land gift) movement in 1951, he joined the effort to have land owners give some of their land to the landless.  He left the re-named Socialist Party, which in any case by 1955 had disintegrated into factions and had largely disappeared from the political scene.  J.P. also was out of sight of those interested in politics until 1974.  Then in 1974, dismayed by what he said was “dishonesty, corruption, manipulation of the masses, naked struggle for personal power and personal gain” he decided to act politically.  He added “The permissible limits have already been crossed in this country.”

He called upon students to push for the dissolution of the Bihar Assembly (his home state) the Vidhan Sabhap.  He created what he called the Sampona Kranti, the Total Revolution Movement.  The movement started spreading, and the Prime Minister, Indira Gandhi, Nehru’s daughter, declared an Emergency, allowing for strong restrictions on civil liberty. Although J.P. had been close to Nehru and looked upon Indira Gandhi as his niece, he was critical of her way of functioning.  J.P. was arrested but then released because of his ill health.  The Emergency lasted from June 1975 until January 1977.

J.P.’s last years until his 1979 death were those of ill health and sadness.  There had not been a Total Revolution nor had village republics been created.

However, his goal lives on.

“The problem is to put man in touch with man, so that they may live together in meaningful, understandable, controllable relationships. In short, the problem is to recreate the human community.” 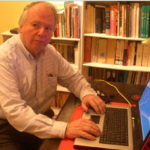 Anticopyright: Editorials and articles originated on TMS may be freely reprinted, disseminated, translated and used as background material, provided an acknowledgement and link to the source, TMS: Jayaprakash Narayan (11 Oct 1902 – 8 Oct 1979): Advocate of the Nonviolent Total Revolution, is included. Thank you.