What Is ‘the UN We Need’ and Who Gets to Choose? 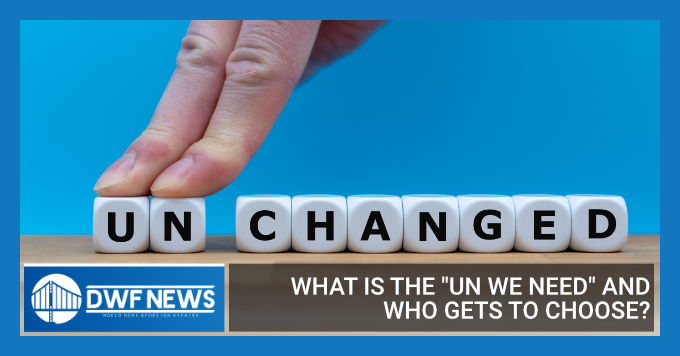 12 Oct 2019 – Why are civil society organisations excited about strengthening the UN when momentum seems distinctly in the opposite direction? When divisions are rife and the international system is in damage limitation mode, as the US cuts funding and repeatedly pulls out of UN bodies?

The opportunity is the UN’s 75th anniversary (UN75) next year and there are modest reasons for hope. The General Assembly (through GA.RES.299)  will host world leaders on 21 September 2020 to reaffirm their collective commitment to multilateralism. What could make this more than a talking shop is the associated intergovernmental preparatory process to agree a forward-looking outcome document on the theme: ‘The future we want, the UN we need’. The first clause seems somewhat redundant given we already have the Sustainable Development Goals, but the second clause speaks to a long overdue exercise which, if done well, could get to the heart of how multilateralism must radically adapt to face the challenges of the 21st century.

Commemorative moments have a mixed track record. The UN’s 50th anniversary, with all the hope surrounding the dawning of a new post-Cold War era, achieved little other than warm words and intangible commitments. Conversely, ten years later the 2005 World Summit made significant progress, upgrading the Human Rights Commission to the Human Rights Council complete with its Universal Periodic Review, global endorsement at the highest level of the ‘Responsibility to Protect’, and the establishment of meaningful peacebuilding architecture. These developments have not been without their controversy, yet the example of the UN’s 60th shows that if there are promising ideas on the shelf a world summit can provide a way to usher them in.

Are there ideas on the shelf this time around and might the bitterly divided political landscape allow for progress? Global threats like climate change, ecosystem collapse and cyber insecurity make it undeniably apparent that initiatives which can move us towards something much deeper than state-level cooperation are necessary. States must know that maintaining a monopoly on global governance is like clutching a poisoned chalice with potentially existential ramifications.

Overcoming such threats will require deep global partnerships between states, business, civil society and leaders at all levels. 2020 can provide a trigger to address this new reality and a launchpad for states to initiate much-needed programmes of renewal within the world organization. To be successful in identifying what constitutes ‘the UN we need’, states will need to listen to those beyond the New York bubble. Supported by a diverse coalition of civil society organisations, two initiatives: Together First and UN2020 are making this case, including through Together First’s recently launched call for ideas.

Where is the UN75 process up to?

The inter-governmental process got off to an ominous start in April 2019, with the first draft of the UN75 General Assembly resolution disappointingly (but unsurprisingly) excluding civil society from the process as well as from the summit itself (with the exception of a paltry allowance for youth participation). After a great furore from civil society and wrangling between states, the resolution that was finally adopted in June 2019 is slightly improved, permitting civil society attendance at next year’s summit as well as associated events for Charter Day (26 June 2020) and UN Day (24 October 2020). More broadly, it now emphasises ‘the need to engage civil society and youth in all activities to commemorate the seventy-fifth anniversary of the United Nations’.

The decision of the Secretary General to designate Fabrizio Hochschild as Special Adviser on the Commemoration of the 75th anniversary, as well as the active involvement of the UN Department of Global Communications, should help streamline civil society’s inputs in the upcoming months. The UN’s aspiration to launch the world’s biggest conversation around how to build this ‘truly global partnership to realize our shared aspirations for a just, peaceful and sustainable future’ is ambitious and encouraging. If this can inspire states to open up and let their citizens into discussions around ‘the UN we need’ then it will be a major step forward.

Calls for deeper inclusion will only increase, and if states don’t open-up, the UN could become irrelevant and bypassed. The stumbling block tends not to be a lack of ideas, but a lack of political will. States should be encouraged by the existence of plenty of proposals that could offer useful stepping-stones towards the more radical destination required. A high-level UN focal point for civil society; mechanisms to address the UN’s democratic deficit such as a parliamentary assembly and a world citizens’ participatory instrument; overhauling UN bodies’ governance structures to include youth; or even reducing the prominence of the Security Council by referring more substantive peace and security matters to the General Assembly are all ideas which could be implemented without UN Charter reform.

If member states want to address global challenges, something has got to give. Rather than supporting specific proposals, our vision is for increased participation in global affairs through inclusive, transparent and fair global decision-making. UN2020 and Together First will be providing a platform for others throughout the UN75 process and beyond, championing options to deepen the current PGA’s mission to ‘make the UN relevant to all people’ and the UN’s goal of advancing people-centered multilateralism.

We have a little over ten years to achieve the Sustainable Development Goals and avert catastrophic climate breakdown. Allowing all stakeholders a say in the process of overhauling global institutions and a seat at the subsequent decision-making table needs to be at the centre of the debate over the future of multilateralism.

One Response to “What Is ‘the UN We Need’ and Who Gets to Choose?”