What Makes a Protest Effective? 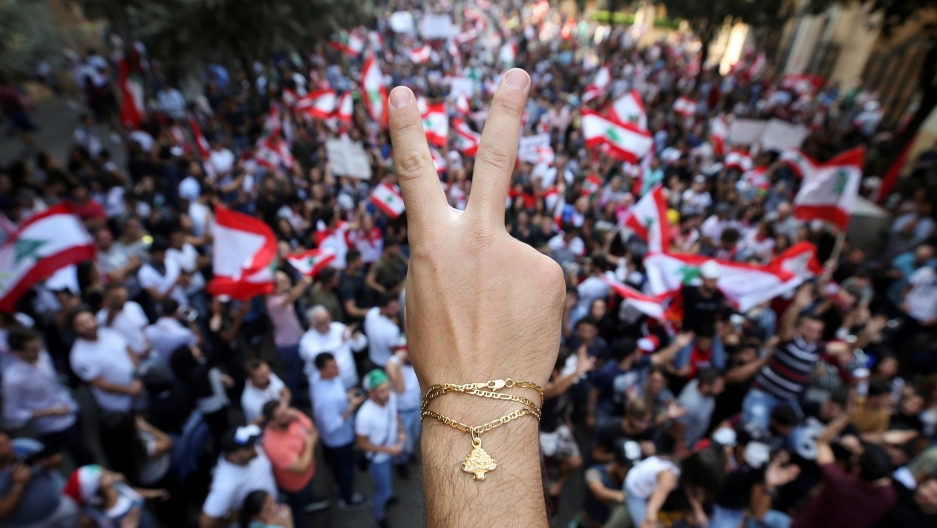 A demonstrator flashes a V sign during an anti-government protest in downtown Beirut, Lebanon, on Oct. 21, 2019. Ali Hashisho/Reuters

21 Oct 2019 – Major protests have exploded across the world over the past week, with people taking to the streets in Lebanon, Barcelona and Chile. That’s on top of recent demonstrations in Hong Kong, Haiti, Iraq and elsewhere.

So, what makes a protest effective?

Orion Lewis, a professor of political science at Middlebury College in Vermont, studies this for a living. Lewis told The World’s host Marco Werman it’s not a coincidence all these protests are happening at once.

Marco Werman: There’s a number of significant movements taking place at the same time. Are they watching each other and learning from each other?

Orion Lewis: This is a pattern that we have seen traditionally — that there tends to be sort of an international contagion. And this is really driven by media and communications.

If you think about the collapse of the former East bloc during the late 80s, the series of color revolutions that happened during the early 2000s, the Arab Spring, all of those had sort of a contagion effect where they were learning from each other and copying each other. And so, when you see the number of movements taking place, I think there’s certainly an element to that. I think we’re also at a contentious point in world history, and there could just be some general overall unrest that’s driving this, as well.

Recent research suggests that nonviolent resistance is more successful than violent campaigns. Why do you think that is?

I think the effectiveness of nonviolent resistance is in its ability to mobilize significant numbers of people around a particular idea or political grievance.

Generally, what they try and do is trust the nonviolence and the legitimacy of their grievance against the corruption or injustice or violence of their opponent. It also is able to use a variety of tactics … such as economic boycotts that can impose real costs on a government. Hong Kong, in this regard, is a good example where the protesters have occupied one of the busiest airports in the world. And so the price and economic cost to one of the most globalized cities in the world is quite significant in that regard.

Are protests enough, though? We’re seeing large-scale protests in a lot of places this past weekend, especially. Do you need to accompany them with some strategy?

When you have movements that are not successful at framing their message or their grievances or engage in violence, that undermines their overall message. So, in this regard, I think Chile is an example where, by my reading of it, it seems to have been more violent and more focused on looting and destruction of property. And that also poses an economic cost. But from a perspective of persuading the broader population, it may not be as successful. And also, in terms of justifying a more repressive government response, it’s not successful in that regard.

I’m just curious, as you cast your eyes across the world this past weekend, did you detect any clear strategies? Who’s got a strategy?

The most successful cases have been in Lebanon, where protesters seem to have gotten the government to agree to a large package of economic reforms or political compromises. And so, instead of responding with repression or violence, the government responded with concessions. Beyond that, I would say it. The protesters in Hong Kong have been very sophisticated and resilient. The Hong Kong movement is creating what I consider to be somewhat of a new models of protest in terms of really utilizing technology to created extremely decentralized movement and has sustained itself over time. And so some of those tactics and that model have been models for other movements elsewhere, such as in Catalonia, where they’re explicitly trying to learn from that sort of model. So I mentioned the airport occupation where they first shut down the airport and then they started protesting in the airport. And that’s something that the Catalonians have picked up explicitly on and have explicitly replicated that tactic.

What is it like for you right now, watching really any number of — around the globe, people pushing for social equality. Is it exciting or troubling for a political scientists like you?

Well, I think it’s always the best of times and the worst of times to some extent. You know, when I look at this, I see some areas where these movements can be effective. Like in Lebanon. There is always the potential for repression and backlash from these movements. And I think, if you’ve paid attention to the carnage in Syria, I think that’s really been an example of how these things can go wrong. There’s always potential for positive outcomes. But I’d be foolish to say that there isn’t a potential for negative outcomes too.

Related: Protests explode around the world

This interview has been lightly edited and condensed for clarity.

One Response to “What Makes a Protest Effective?”