22 Nov 2019 – Last month, 39-year-old Alex Nuñez was sitting on a park bench in Maipú, a low-income neighborhood on the outskirts of Santiago, when a protest began in a nearby park.

People had been taking to the streets on a nearly daily basis throughout Chile to protest the rising inequality, cost of living and the policies of president Sebastián Piñera. Suddenly, police, known as Carabineros, broke up the protest and started chasing after people.

Caught up in the shuffle, Nuñez was severely beaten by a group of officers. His wife, Natalia Perez, told CNN that Nuñez walked home that night with his face mangled. The father of three told his family he was okay and needed to the rest. The next day, he was rushed to the hospital where he died from massive brain trauma.

“I know that when the doctor says, ‘I need to speak with you’, it’s because things are not good. Never in my mind did I think it was this serious,” Perez told CNN shortly after Nuñez’s death.

Nuñez, whose story was reported by CNN in October, is one of several Chileans featured in a new Amnesty International report released on Thursday. The report alleges that state security forces, including both the police and army, deliberately use excessive force against protesters.

After the report’s release, President Piñera spoke to reporters at La Moneda presidential palace on Thursday, saying his government and the country had faced “a situation that they never had to face and that tough decisions were taken before these crossroads.”

“The Armed Forces have rules that they need to follow in the use of force,” Piñera said. “In some cases, the protocols that are in place and the law were not followed. Excesses and abuses were committed and the attorney general’s office is investigating those incidents, which will be revealed and tried by our courts. This is how a democracy works.” 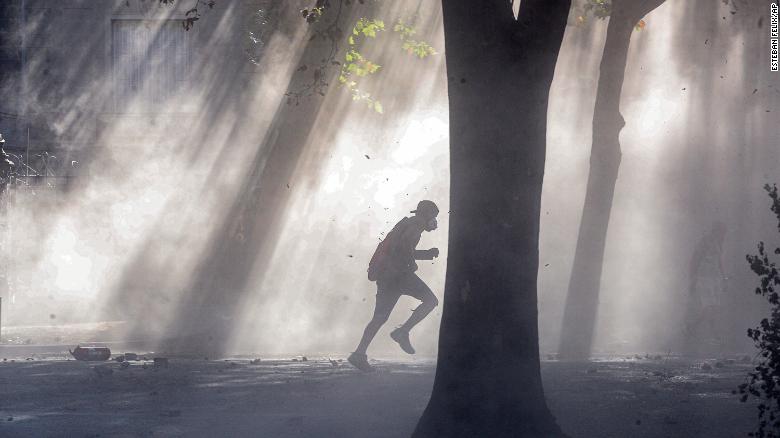 An anti-government demonstrator runs through a tear gas cloud during clashes in Santiago, Chile, on Nov. 19.

The ongoing mass protests began in Chile’s capital Santiago on October 18, ignited by a hike in subway ticket prices and fueled by anger over economic and social inequality in one of the wealthiest countries in Latin America.

As the protests intensified, Piñera declared a temporary state of emergency throughout the country. Daily curfews were put in place in the capital Santiago and soldiers deployed to the streets. He also asked all his cabinet ministers to resign, and promised to impose social and economic reforms that were at the heart of the protests.

The fare increase was ultimately suspended, but the people of Chile had already paid another price: At least 21 people have been killed, CNN’s reporting shows. More than 2300 people were injured and of those 220 suffered severe eye injuries, according to data from Chile’s National Human Rights Institution (NHRI), cited in Amnesty International’s report.

“Instead of taking measures to curb the very grave human rights crisis, the authorities, under the command of President Sebastian Piñera, have pursued a policy of punishment for over a month, adding yet more people to the staggering number of victims, which is continuing to rise to this day.” 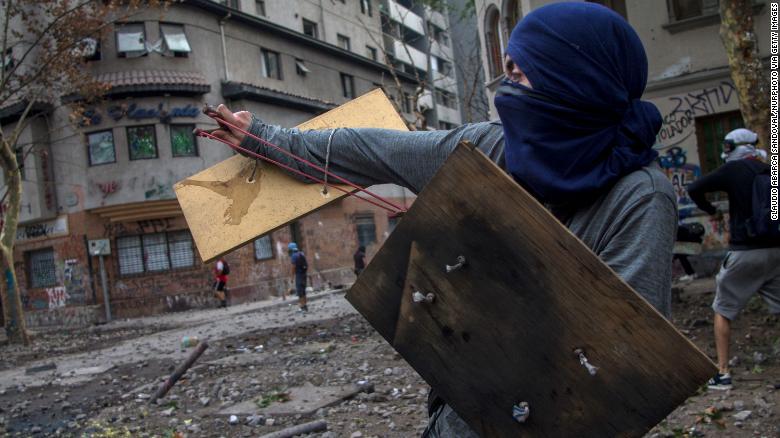 A protester in Santiago on November 21

Natalia Aravena, a 24-year-old nurse in Santiago, told CNN her right eye was severely injured during a protest. She said she was participating in a peaceful protest when the Carabineros began to use water cannons and tear gas to break up the crowd.

“It was instantaneous. I turned around and felt something in my eye and I told myself ‘oh, no! It happened to me,” Aravena said. “I immediately thought I had lost my eye, impossible that after this I will still have sight or that my eye will go back to normal.”

Aravena said that a police tear gas canister hit her in the eye, damaging part of her cornea, and ultimately her vision. She believes the attack was intentional. “If they wanted to break up the protest, they should have shot in the tear gas in the air and not directly at the people,” she said. “It was all very aggressive.”

Amnesty International says it has documented dozens of injuries caused by rubber bullets, as well as one death. Its report includes witness testimony that 24-year-old Kevin Gómez was killed when he was allegedly shot by a soldier with rubber bullets at close range and without warning in the city of Coquimbo. According to a medical report cited by Amnesty, Gómez died on Oct. 21 of a “thoracic lung injury caused by multiple projectiles.”

The soldier who fired on Gómez was arrested last month following the incident, according to local media reports. The Attorney General’s office published on their official Twitter account on Nov. 19 that Gomez was among five people whose deaths were caused by “agents of the state” during the protests. 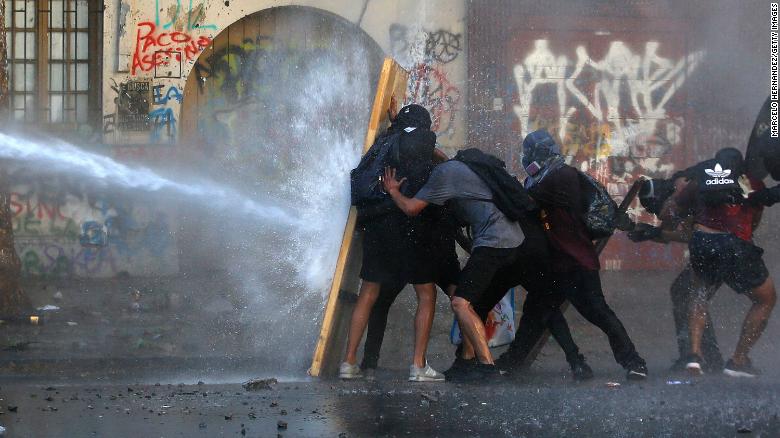 Demonstrators take cover from water fired by a riot police truck during a protest against President Sebastian Piñera on November 19 in Santiago, Chile.

The United Nations High Commissioner for Human Rights and former Chilean president Michelle Bachelet sent a team to the South American country last month to investigate human rights allegations against protesters. They are scheduled to end their mission Friday.

Opposition lawmakers also presented a motion Tuesday, to begin impeachment proceedings against President Sebastian Piñera, which is known as a “constitutional accusation.” The accusation claims the President has “openly violated the Constitution” and displayed “systematic violation of human rights.”

Meanwhile, protests continue. In an effort to quell demands and frustrations, lawmakers from several political parties announced a major step towards reforming the country’s constitution, which was approved in 1980 during the military dictatorship of General Augusto Pinochet. Under the accord, which was signed by both the government and opposition parties, a referendum will be held next April in order for Chileans to vote on the changes.