Don’t Call Me a Pessimist on Climate Change. I Am a Realist (Part 1)

To see our fate clearly, we must face these hard facts about energy, growth and governance. 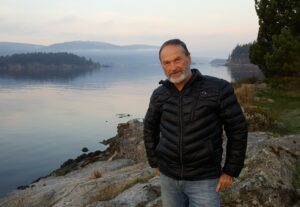 11 Nov 2019 – No one wants to be the downer at the party, and some would say that I am an unreformed pessimist. But consider this — pessimism and optimism are mere states of mind that may or may not be anchored in reality. I would prefer to be labeled a realist, someone who sees things as they are, who has a healthy respect for good data and solid analysis (or at least credible theory).

Why is this important? Well, if Greta Thunberg and followers are to inspire more than emotional release about climate change, the world needs to face some hard facts that suggest we are headed toward catastrophe. At the same time, skepticism is the hallmark of good science; realists too must be open to the challenge posed by new facts.

So, today, and in a piece to follow, I present an unpopular but fact-based argument in the form of two “Am I wrong?” queries. If you accept my facts, you will see the massive challenge we face in transforming human assumptions and ways of living on Earth.

I welcome being told what crucial facts I might be missing. Even a realist — perhaps especially a realist in present circumstances — occasionally wants to be proved incorrect.

Question 1: The modern world is deeply addicted to fossil fuels and green energy is no substitute. Am I wrong?

We can probably agree that techno-industrial societies are utterly dependent on abundant cheap energy just to maintain themselves — and even more energy to grow. The simple fact is that 84 per cent of the world’s primary energy today is derived from fossil fuels.

It should be no surprise, then, that carbon dioxide from burning fossil fuels is the greatest metabolic waste by weight produced by industrial economies. Climate change is a waste management problem!

Cheap fossil energy enabled the world to urbanize, and this process is continuing. The UN expects the urban population to rise to 6.7 billion — 68 per cent of humanity — by 2050. There will be 43 mega-cities with more than 10 million inhabitants each as early as 2030, mostly in China and other Asian countries.

Building out these and hundreds more large cities will require much of the remaining allowable carbon budget. Moreover, the current and future inhabitants of every modern city depend absolutely on the fossil-fuelled productivity of distant hinterlands and on fossil-fuelled transportation for their daily supplies of all essential resources, including water and food.

All of which generates a genuine emergency. By 2018, the combustion of fossil fuel alone was pumping 37.1 billion tonnes of carbon dioxide into the atmosphere. Add to this the net carbon emissions from land clearing (soil oxidation) and more vigorous forest fires, and we can see why atmospheric carbon dioxide concentrations reached an all-time high of 415 parts per million in early 2019.* This is 48 per cent above pre-industrial levels and concentrations are rising exponentially.

And, of course, everyone with an active brain cell is aware that CO2 is the main human-related driver of global warming and associated climate change.

“Not to worry, all we have to do is transition to green renewable energy!”

In fact, there is plenty of superficial support for the notion that green tech is our saviour. We are told repeatedly that the costs of providing renewable energy have fallen so low that it will soon be practically free. Australian professors Andrew Blakers and Matthew Stocks say “Solar photovoltaic and wind power are rapidly getting cheaper and more abundant — so much so that they are on track to entirely supplant fossil fuels worldwide within two decades.” Luckily, the transition won’t even take up much space: UC Berkeley professor Mehran Moalem argues that “an area of the Earth 335 kilometres by 335 kilometres with solar panels… will provide more than 17.4 TW power…. That means 1.2 per cent of the Sahara desert is sufficient to cover all of the energy needs of the world in solar energy.” (Someone should remind Prof. Moalem that, even if such an engineering feat were possible, a single sandstorm would bury the world’s entire energy supply.)

The first problem with such claims is that despite rapid growth in wind and solar generation, the green energy transition is not really happening. The chart below shows that in most recent years (except 2009, following the 2008 global financial crisis), the uptick in global demand for electrical energy exceeded the total output of the world’s entire 30-year accumulation of solar power installations. Between 2017 and 2018, the demand increase outpaced total solar supply by 60 per cent; two years’ demand increase absorbs the entire output of solar and wind power combined. 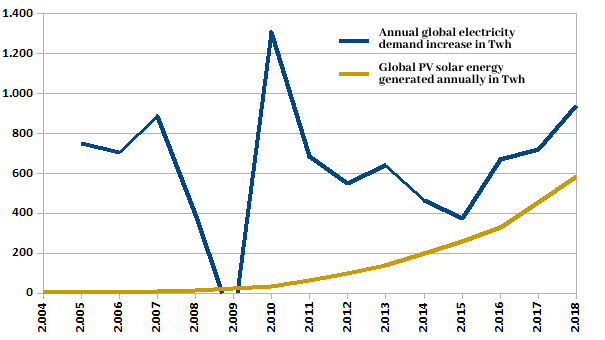 The annual increase in demand for electricity exceeds the entire output of photovoltaic electricity installations.
Graph courtesy of Pedro Prieto, with permission.

As long as the growth in demand exceeds additions to supply from renewables, the latter cannot displace fossil fuels even in electricity generation — and remember, electricity is still less than 20 per cent of total energy consumption, with the rest being supplied mostly by fossil fuels.

Nor is any green transition likely to be cheap. The cost of land is substantial and, while the price of solar panels and wind turbines have declined dramatically, this is independent of the high costs associated with transmission, grid stabilization and systems maintenance. Consistently reliable wind and solar electricity requires integrating these sources into the grid using battery or pumped hydro storage, back-up generation sources (e.g., gas turbines, cruise-ship scale internal combustion engines, etc.) and meeting other challenges that make it more expensive.

Also problematic is the fact that wind/solar energy is not really renewable. In practice, the life expectancy of a wind turbine may be less than 15 years. Solar panels may last a few years longer but with declining efficiency, so both turbines and panels have to be replaced regularly at great financial, energy and environmental cost. Consider that building a typical wind turbine requires 817 energy-intensive tonnes of steel, 2,270 tonnes of concrete and 41 tonnes of non-recyclable plastic. Solar power also requires large quantities of cement, steel and glass as well as various rare earth metals.

World demand for rare-earth elements — and Earth-destroying mining and refining — would rise 300 per cent to 1,000 per cent by 2050 just to meet the Paris goals. Ironically, the mining, transportation, refining and manufacturing of material inputs to the green energy solution would be powered mainly by fossil fuels (and we’d still have to replace all the machinery and equipment currently running on oil and gas with their electricity-powered equivalents, also using fossil fuel). In short, even if the energy transition were occurring as advertised, it would not necessarily be reflected in declining CO2 emissions.

If we divide 2018 into energy segments, oil, coal and natural gas powered the globe for 309 out of 365 days, hydro and nuclear energy gave us 41 days, and non-hydro renewables (solar panels, wind turbines, biomass) a mere 15 days. If the race is towards a decarbonized finish line by 2050, we’re still pretty much stalled at the gate.

Fact: Despite the hype about the green energy revolution and enhanced efficiency, the global community in 2019 remains addicted to fossil energy and no real cure is on the horizon.

As I say, please do tell me I’m wrong.

Story updated on Nov. 13 to correct that carbon dioxide concentrations in early 2019 reached an all-time high of 415 parts per million, not per billion.

William E. Rees is professor emeritus of human ecology and ecological economics at the University of British Columbia.