Evil Hour in Honduras: A Banana Republic Lives On 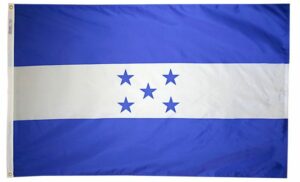 23 Nov 2019 – If motivated to find the pinnacle of callous and hypocritical American statecraft one would have no shortage of choices. Of course the Middle East alone provides quite a bevy. From the numerous betrayals of the Kurds, to the ceaseless support for the House of Saud, including in its brutal war in Yemen, to the billions of dollars regularly pumped into dictatorship in Egypt, to the continual dispossession of the Palestinians. However in terms of pure cynicism perhaps the answer is found closer to home in Central America.

Central America since the days of the Monroe Doctrine has always been regarded as a backwater by American policy, a region of exploitable land and cheap labor. Hence the notion of ‘banana republics’- the phrase began its life as a literal term. For much of the history the lynchpin of all this, as it remains now in the Middle East, was dictatorship. The list of American clients in the region has been distinguished: the Somoza family in Nicaragua, Carlos Armas and Rios Mott in Guatemala, Carlos Romero in El Salvador to name only a few. When the inevitable uprisings by the longsuffering masses came U.S. policy spared no expense or blood to prop up the anciens régimes where they held power and to restore them where they were overthrown. When the dust more or less settled revolution was defeated.

For the most part in the post-Cold War period the old elite was still in power, the economies of the region grew at a lower rate than most of the developing world- helped in no small part by plunging coffee prices ruining small famers. Much of the local economies are dependent on remittances from abroad. Violent street gangs took root (gang culture was imported back to the region by deported war refugees who learned the trade on the streets of Los Angeles), and the drug war in nearby Mexico exploded. The murder rate throughout the region has consistently ranked near the top of the world.

The most violent country has at times been Honduras. Honduras is a country with longstanding ties to the U.S. military. It was the staging ground for the U.S. trained Contras invasion of Nicaragua. Into this vortex stepped Manual Zelaya, who was elected president in 2005. Zelaya was a card carrying member of the Honduran elite, descending from a wealthy landowning family in the lumber industry. Heading a stale Liberal Party, Zelaya even supported the Central American Free Trade Agreement that took force in 2006. Unexpectedly, in conjunction with the ‘Pink Tide’ then prominent in Central and South America, Zelaya moved to the Left. He raised the minimum wage by 60 percent, to the dismay of the business community, called for drug use to be legalized, and joined the Bolivarian Alternative for the Americas (ALBA), the left leaning regional trade group founded in 2004.

However it was probably the land question that truly doomed Zelaya in the eyes of the elites. In 2001 an organization called the Unified Peasant Movement of the Aguan (MUCA) was formed to challenge land sales in the fertile Bajo Aguan valley stemming from a 1992 law on the grounds of fraud and corruption. In early 2009 Zelaya reached an agreement with MUCA whereby, under Decree Law 18-2008, peasants would receive land titles to properties they had occupied and produced on for ten or more years. The law would have resolved over 400 land conflicts.

The coup came on June 28th 2009. It could fairly be described as a traditional affair, paralleling earlier coups against Arbenz in Guatemala (1954), Allende in Chile (1973), and the failed attempt against Chavez in Venezuela (2002). Under the guise of Zelaya allegedly seeking dictatorial power through an upcoming nonbinding referendum that was to gage public interest regarding possible constitutional reform (similar reform had already taken place in Ecuador, Venezuela, and Bolivia) , a measure that had grassroots support- critics claimed the point of which was to allow Zelaya to run for another 4 year term that was illegal under Honduran law; but with 6 months left in his term it is a difficult charge to justify, the military, led by another School of the Americas graduate Romeo Varquez, exiled Zelaya to Costa Rica and installed conservative businessman Roberto Micheletti. All the usual trimming of press censorship and violent suppression of protest went into effect.

At the time, Washington implicitly and explicitly supported the coup from not condemning the coup when it happened (instead merely calling on ‘all political and social actors in Honduras’ to respect democracy- U.S. officials have acknowledged they were talking to the Honduran military right up to the day of the coup), never once calling for Zelaya to be returned to office (as opposed to the OAS- Organization of American States), not suspending aid, blocking an OAS from adopting a resolution that would have refused to recognize the subsequent election that took place under the oppressive coup regime and was boycotted by the opposition, and not meeting Zelaya despite numerous requests, while meeting the winner of the fraudulent election, Porfirio Lobo Sosa, in the White House.

Besides increasing lawlessness and violence in general the coup has turned the state into the main purveyor of it. Since Zelaya’s removal dozens of journalists have been murdered with barely an ounce of retribution. And paralleling the horror facing union activists in Colombia, land activists have also been killed in scores by both corrupt police and paramilitaries aligned with the state and land barons (i.e. agribusiness). A report released in 2017 by Global Witness recorded 120 land activists killed in the fertile Bajo Aguan region since 2010, most in conflicts with rapidly expanding palm oil plantations (traded globally on the carbon credit racket).  Another report, this one by the Honduras based Violence Observatory (Observatorio de Violencia) found that police killed 149 civilians between January 2011 and November 2012, averaging six per month. Two-thirds of Hondurans live in poverty.

As for democratic legitimacy, the term limits that Zelaya was falsely accused of trying to eliminate for his own benefit were indeed eliminated, with nary an ounce of the outrage directed toward Zelaya, by Honduran Supreme Court in favor of conservative president Juan Orlando Hernández who was reelected in an obviously rigged vote, the result of which was immediately recognized by the Trump administration.

In 2009 the Obama administration worked to legitimize the coup government in Honduras after the overthrow of a democratically elected president. Today in Honduras the Trump administration recognizes the results of an obviously rigged election in favor of a reactionary incumbent who only stood for reelection due to a corrupt Supreme Court changing the Constitution to allow it- exactly the official and false justification for 2009 coup. Liberal adoration of Barack Obama could be as gruesome as the cult of Trump.

The perfect coda came last month when President Hernández’s brother was convicted by a New York jury of drug trafficking.  Hernández, who loudly proclaims himself the sworn enemy of drug dealers everywhere, is labeled by the prosecutors as a co-conspirator. A parade of witnesses described the president as looking the other way in exchange for millions in bribes used to fund his and his party’s political campaigns.  No less a figure than El Chapo himself is alleged to have passed the president’s brother Tony Hernandez a million dollars in bribes with at least some of it meant to be passed to the president.  The previous president Porfirio Lobo is also alleged to have been involved in such schemes.

The same day the conviction came down on Tony Hernandez, the American embassy in Honduras, as if trying to be as Kafkaesque as possible, brazenly tweeted out: ‘The United States and Honduras have a strong bilateral relationship and our governments cooperate on a wide range of issues including migration, security, the fight against narcotics, and economic development.’  Just two days earlier the Trump administration announced it was unfreezing some ‘targeted aid’ to the region as a result of the governments of El Salvador, Guatemala, and Honduras agreeing to so-called asylum cooperation agreements, enabling asylum-seekers to be sent back to the countries they originated while their claims are being processed. The great majority of asylum claims end up being rejected.

Thus completes another circle of callousness and exploitation from which generations of Central Americans have been unable to escape.

Joseph Grosso is a writer and librarian in New York City.