Hong Kong out of Hand: As China Supporters Are Set on Fire It Must Be Time for a Full Response from Beijing 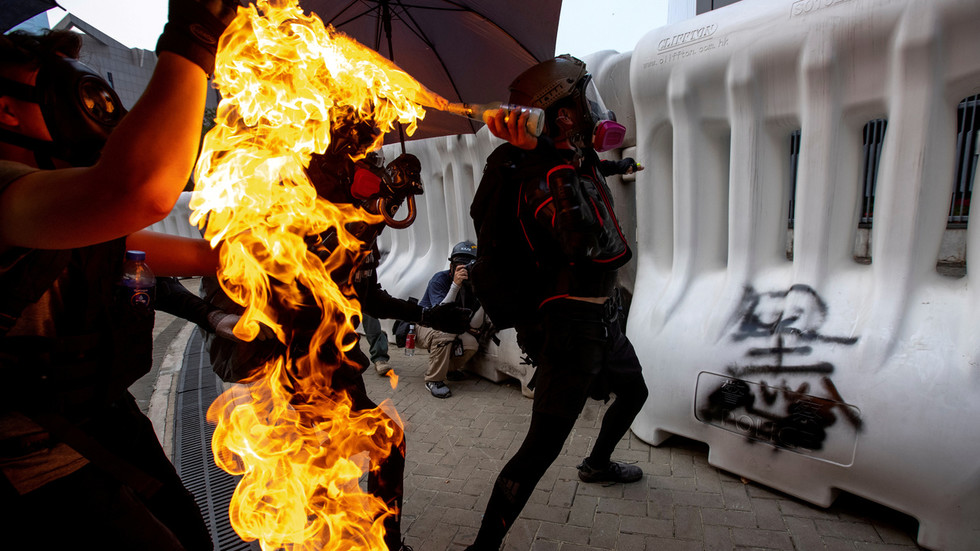 An anti-government protester throws a Molotov cocktail during a demonstration near the Legislative Council building in Hong Kong, China, September 29, 2019.
REUTERS/Athit Perawongmetha

14 Nov 2019 – With increasing speculation that the coup which ousted Evo Morales in Bolivia might be linked to the lithium contract the country signed with China, the government in Beijing is at a crossroads, and not just in Latin America.

Few presidents will now risk the grisly fate of Evo Morales, his family and supporters if that is the fate of the friends of Beijing. It has become increasingly obvious that China’s burgeoning economic power is not matched by its political resolve to defend the friends it is increasingly making.

And if that is true in far away developing countries, it is understandable. China is ,at least not yet, willing or able to make the kind of stand with its allies that Russia has made so decisively with Syria.

But what of Hong Kong, a part of China itself?

The video this week of a supporter of the Chinese line in Hong Kong literally being set on fire by thugs masquerading as “democracy supporters” in the ongoing uprising against Chinese rule in the province has brought home the sheer horror of events unfolding, while Hong Kong’s once booming economy is being incinerated in plain sight. Still, the famous Chinese patience shows no sign of wearing thin. The most likely reason for China’s failure to bring the situation under control – an existential challenge by the rioters and their foreign backers – is an unwillingness to incur a public-relations backlash across the world. A new Tiananmen Square.

But while in France the violence of the state against the Yellow Vest protestors is suppressed by Western media, the lack of state-response in Hong Kong has not met with approval from the censors of the events in France. Western hatred of China cannot be palliated by becoming a punchbag for the marauding wreckers in Hong Kong. Turning the other cheek merely invites new and more awful blows.

The state forces are now the victims of organised and bloody terror attacks, while just miles away overwhelming force remains, for now, in the barracks. Police officers have been lynched, incendiary bombs have burned cops, civilians and public property alike. Individuals, like the one scorched this week, have increasingly regularly been beaten to a bloody pulp. The flag of China has been burned, thrown in the sea, while the flags of the foreign patrons of the mobs are hoisted even in government buildings. It’s alleged that the funding of the ringleaders was coming from abroad. Foreign NGOs, even if their names are written in Chinese characters, are the Trojan Horses in the corner of the room.

China risks its friends, far and near, concluding that loyalty is a one-way street. Make a deal with China? Get overthrown. Stand up for China on the streets of Hong Kong? Get turned into a fireball.

This is not a good look for a super-power.

China should step up to the plate with its simply immense strength and importance. It must develop a foreign policy commensurate with its economic power. All should be a friend of China. And China should be a friend of all its friends. There used to be a Maoist slogan on posters in my youth: “China has friends all over the world”. That’s more true now than it ever was then. But it’s keeping your friends which is the key, and nowhere more so than at home. And as another Maoist slogan said, paraphrasing Marx’s that in the end “the State is but an armed body of men” – “political power comes out of the barrel of a gun”.

In this case there is no need of guns. China has the sheer manpower to physically occupy the public space now being destroyed and deny it to the destroyers. It surely cannot be long before they use it.