Max Blumenthal editor of The Grayzone

28 Oct 2019 – The Grayzone editor Max Blumenthal has been arrested on false charges after reporting on Venezuelan opposition violence outside the DC embassy. He describes the manufactured case as part of a wider campaign of political persecution.

Max Blumenthal, the editor of the news site The Grayzone, was arrested on the morning of October 25 on a fabricated charge related to the siege of the Venezuelan embassy in Washington, DC that took place between April and May.

A team of DC police officers appeared at Blumenthal’s door at just after 9 AM, demanding entry and threatening to break his door down. A number of officers had taken positions on the side of his home as though they were prepared for a SWAT-style raid.

Blumenthal was hauled into a police van and ultimately taken to DC central jail, where he was held for two days in various cells and cages. He was shackled by his hands and ankles for over five hours in one such cage along with other inmates. His request for a phone call was denied by DC police and corrections officers, effectively denying him access to the outside world.

Blumenthal was informed that he was accused of simple assault by a Venezuelan opposition member. He declared the charge completely baseless.

“This charge is a 100 percent false, fabricated, bogus, untrue, and malicious lie,” Blumenthal declared. “It is clearly part of a campaign of political persecution designed to silence me and the The Grayzone for our factual journalism exposing the deceptions, corruption and violence of the far-right Venezuelan opposition.”

The arrest warrant was five months old. According to an individual familiar with the case, the warrant for Blumenthal’s arrest was initially rejected. Strangely, this false charge was revived months later without the defendant’s knowledge.

“If the government had at least told me I had a warrant I could have voluntarily surrendered and appeared at my own arraignment. I have nothing to fear because I’m completely innocent of this bogus charge,” Blumenthal stated. “Instead, the federal government essentially enlisted the DC police to SWAT me, ensuring that I would be subjected to an early morning raid and then languish in prison for days without even the ability to call an attorney.” 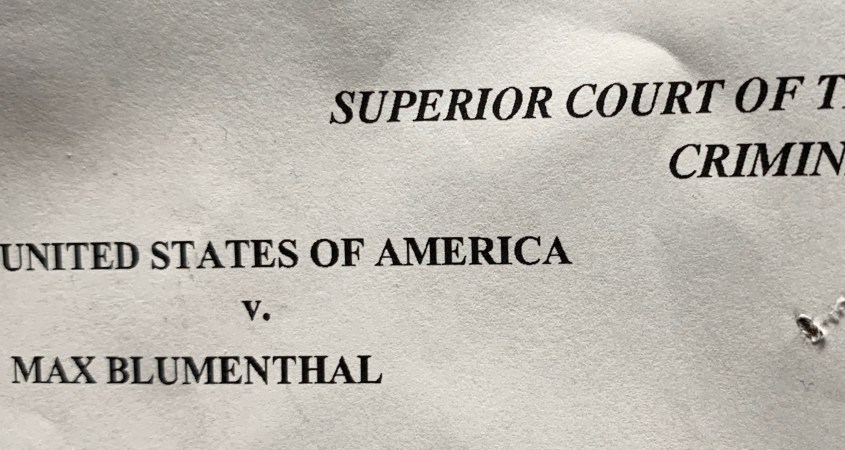 Background to the embassy siege

In April and May, Washington-backed Venezuelan coup leaders began taking over properties in the United States that belong to the internationally recognized government of Venezuela’s democratically elected President Nicolás Maduro, in violation of international law.

A group of activists responded by keeping a vigil inside the Venezuelan embassy in Washington, DC, in order to protect it from an illegal seizure by the US-supported coup leaders. The activists formed what they called the Embassy Protection Collective. The internationally recognized Venezuelan government gave them permission to stay in its embassy, which is its own sovereign territory under international law.

In response, hordes of violent right-wing activists who support the Venezuelan opposition launched a de facto 24/7 siege of the embassy, preventing people, food, and supplies from entering the building.

The Grayzone reporter Anya Parampil and Alex Rubinstein, a contributor to The Grayzone, were embedded in the embassy with several peace activists.

Parampil and journalists including Blumenthal documented the right-wing mobs lashing out with racist and sexist invective as well as violence at Venezuelan solidarity activists who gathered outside the embassy to show support for the protectors.

WATCH: Escualidos attack and choke a supporter of the Embassy Protection Collective trying to deliver food. The Secret Service REFUSED to arrest the assailant pic.twitter.com/xVzHd2i4Hk

‘This ginned up claim… is simply false’

Court documents indicate the false charge of simple assault stems from Blumenthal’s participation in a delivery of food and sanitary supplies to peace activists and journalists inside the Venezuelan embassy on May 8, 2019.

The charge was manufactured by a Venezuelan opposition member who was among those laying siege to the embassy in a sustained bid to starve out the activists inside.

“I was not party to any violent actions around the Venezuelan embassy,” Blumenthal reiterated. “This ginned up claim of simple assault is simply false.”

According to court documents, Ben Rubinstein, the brother of journalist Alex Rubinstein, also participated in the non-violent and legal food delivery. Rubinstein was arrested over 12 hours later after the food delivery by Secret Service police officers.

He spent 20 hours in jail, alongside Gerry Condon, president of Veterans for Peace, who was arrested after being brutalized by Secret Service officers for attempting to toss a cucumber inside an embassy window.

“The opposition members made up these lies about Max and I know they’re lying, and they are obviously using the government and police as tools to get revenge,” Ben Rubinstein told The Grayzone.

Retaliation for The Grayzone’s reporting on the violent Venezuelan opposition

Max Blumenthal reported extensively from outside the Venezuelan embassy in May. He filed a story explaining how

“the pro-coup mob outside turned violent, physically assaulting embassy protectors, and hurling racist, sexist and homophobic abuse at others.”

Blumenthal documented an opposition activist breaking into and subsequently vandalizing the embassy, in violation of international law. He also reported on opposition members destroying the embassy’s security cameras, while the authorities stood idly by.

To the left of the fascist is “Mohamed,” the right-wing vigilante who broke into the embassy two days ago and ransacked an entire room: https://t.co/eIEjlKj4M7@DCPoliceDept has taken no action beyond aiding and abetting this squalid mob https://t.co/RIQy5bkHZ2

The Venezuelan coup regime’s supposed ambassador to the United States, Carlos Vecchio, who is not recognized by the United Nations and the vast majority of the international community, helped to lead this aggressive mob as it besieged the embassy.

The Grayzone’s Anya Parampil exposed Vecchio to be a former lawyer for the oil corporation Exxon. The Grayzone has documented his close links to the US government, and has reported at length on accusations of corruption. Vecchio was a regular presence outside the DC embassy, appearing with his gaggle to stage manage the situation.

The Grayzone has also published numerous exposés on Venezuelan coup leader Juan Guaidó, who was selected by the US government to be the so-called “interim president” in Caracas, detailing his extensive ties to Washington and his notorious corruption.

Blumenthal was arrested literally hours after The Grayzone published an article on USAID paying the salaries of Guaidó’s team as they lobbied the US government.

“I am firmly convinced that this case is part of a wider campaign of political persecution using the legal system to shut down our factual investigative journalism about the coup against Venezuela and the wider policy of economic warfare and regime change waged by the Trump administration,” Blumenthal stated.

If this had happened to a journalist in Venezuela, every Western human rights NGO and news wire would be howling about Maduro’s authoritarianism. It will be revealing to see how these same elements react to a clear-cut case of political repression in their own backyard.

Ben Norton is a journalist, writer, and filmmaker. He is the assistant editor of The Grayzone, and the producer of the Moderate Rebels podcast, which he co-hosts with editor Max Blumenthal. His website is BenNorton.com.