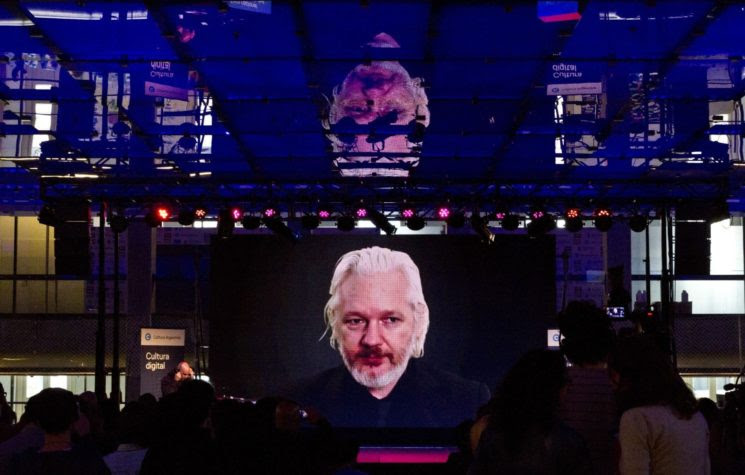 8 Nov 2019 – A United Nations expert in torture diagnosis has in the past week issued a stark warning that Australian whistleblower Julian Assange is in danger of dying from extreme prison conditions in Britain.

It is testimony to the rank hypocrisy of British and American governments who lecture others around the world about democracy, human rights and international law.

One can only imagine the hysterical outcry among Western governments and media if somehow Assange was being detained in a Russian, Chinese or Iranian prison.

The 48-year-old Assange has been held in a maximum-security prison in London since April this year when he was forcibly removed from the Ecuadorean embassy. His arrest was itself a staggering breach of international law. Assange had been confined to the embassy for nearly seven years where he sought asylum to avoid being extradited to the US.

He should have been released on September 22 when his sentence for a past bail infringement had been served out. Instead, a British judge has ordered Assange to be detained until the extradition trial to the US gets underway next year. If Assange is extradited to the US he is facing 175 years in prison if convicted for espionage. Few would believe that he will receive a fair trial in Britain or the US. He has been denied due process of consulting with his defense lawyers.

Assange’s “espionage” charge stems from the fact that his whistleblower site WikiLeaks published volumes of damning information exposing massive US and NATO war crimes in Iraq, Afghanistan and elsewhere. His publications of leaked data also exposed Western diplomatic malfeasance in several countries, as well as illegal global spying on citizens by US intelligence agencies in collusion with British counterparts.

Assange has provided vital information to the international public which demonstrates systematic corruption by Washington and its allies. For telling the truth, he is now being persecuted, just as his whistleblowing colleagues, Chelsea Manning and Edward Snowden are. Manning has been repeatedly imprisoned in the US, while Snowden has had to seek asylum in Russia for fear of being summarily incarcerated as a “traitor” if he returns to the US.

Nils Melzer, an internationally recognized expert on torture treatment, visited Assange back in May this year during his ongoing detention in Belmarsh Category A prison under conditions of solitary confinement. He concluded then that Assange was suffering psychological torture by the British authorities. His latest warning is based on up-to-date medical information pertaining to Assange’s health, and it makes for a grim assessment.

In a grave conclusion, he added: “While the precise evolution is difficult to predict with certainty, this pattern of symptoms can quickly develop into a life-threatening situation involving cardiovascular breakdown or nervous collapse.”

Melzer said the measures he urged back in May to protect Assange’s health and dignity have been pointedly ignored. “However, what we have seen from the UK government is outright contempt for Mr Assange’s rights and integrity… Despite the medical urgency of my appeal, and the seriousness of the alleged violations, the UK has not undertaken any measures of investigation, prevention and redress required under international law.”

In a further damning comment, Melzer said that Julian Assange “continues to be detained under oppressive conditions of isolation and surveillance, not justified by his detention status. While the US government prosecutes Mr Assange for publishing information about serious human rights violations, including torture and murder, the officials responsible for these crimes continue to enjoy impunity.”

The appalling assessment corroborates what Assange’s father told Strategic Culture Foundation in an interview published on September 24. John Shipton warned then that he feared his son was being killed extrajudicially by the British and American authorities.

Despite Assange’s award-winning journalism and truth-telling, the Western mainstream media have shown utter disregard for his plight. Indeed, such media have tended to bolster the vilification and character assassination piled on Assange by the American and British governments.

The hypocrisy is further underscored by recent US media attempts to lionize a so-called whistleblower who has helped launch impeachment proceedings against President Trump over alleged corruption in connection with Ukraine. By contrast, the same media in their callous indifference towards Assange are condemning him to torture for acts of whistleblowing which were truly historic in their scope and importance.

However, one thing that has severely disadvantaged the cause of Assange is the smear campaign against him, accusing him of being a “Russian asset” or “cyber terrorist”. These smears have been peddled by Western media.

So, evidently, when so-called whistleblowing serves power it is deemed praiseworthy. But when whistleblowers challenge and discredit power then they are persecuted as criminals, even to the point of death.

Arguably, if President Donald Trump had any scruples he would drop the trumped-up espionage case against Assange. After all, it was WikiLeaks’ exposures of corruption by Hillary Clinton and her Democratic Party chiefs which partly boosted Trump’s election in 2016. Assange obtained those leaks from a Democratic insider, not from Russian hackers, as is commonly asserted by deluded “Russiagaters”.

Julian Assange while he was free and now while in prison exposes the systematic criminality and immorality of Western governments and their lackey corporate media. That’s why he finds himself in the hellish dungeon conditions today in a British prison.

We can only hope that mounting public pressure can be brought to bear on Washington and London to restore Assange’s freedom and life. In the meantime, the cruel vindictiveness of both governments, their lawlessness and profound contempt for human rights, is surely an eye-opening spectacle.