US Seizure of Oil Fields Escalates Tensions in Syria

8 Nov 2019 – The US has deployed hundreds of troops backed by armored vehicles into oil fields located in Syria’s northeastern Deir Ezzor province, where they are reportedly building two new bases. Turkish media have reported that large quantities of construction equipment and materials have been sent into the region, along with the troops, tanks, armored personnel carriers and ammunition.

Pentagon officials defended the renewed deployment at a press briefing Thursday [7 Nov]. However, they resolutely refused to answer questions about US President Donald Trump’s statements that the troops were there to “take the oil”, and Defense Secretary Esper’s acknowledgement last week that the US mission includes “denying access, preventing Russian or Syrian forces” from laying claim to the oil, including through the use of “overwhelming force”. 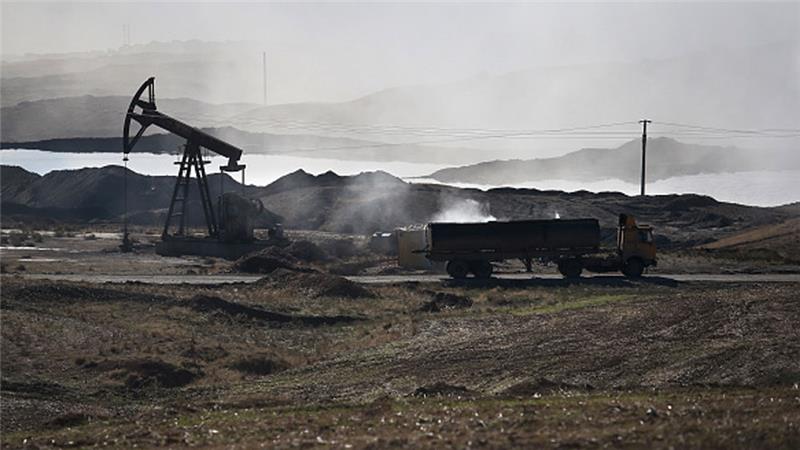 ISIL oil plunder in Syria now in the hands of the USA. Trump: ‘We are keeping it’. Imperial[ism] theft. [Getty]

Rear Adm. William D. Byrne, Jr, the vice-director for the Joint Chiefs of Staff, robotically repeated that the US operations in Syria remained unchanged from what they had been since 2016: “the defeat of ISIS [Islamic State of Iraq and Syria]”. He repeatedly added that US forces were fighting “shoulder to shoulder with our SDF [Syrian Democratic Forces] partners.”

Asked whether the US forces were going to take over all of Syria’s oil fields or only a portion of them, the naval officer suggested that this would be left to “commanders on the ground.”

As to whether they had authorization to fire on Syrian and Russian units approaching the fields, Byrne said he was “not going to get into specifics” on “rules of engagement,” while claiming that there were “deconfliction channels” in place to prevent such an armed confrontation between the forces of the world’s two major nuclear powers. He added that “everyone in the region knows where American forces are” and that the US military would “work to ensure that no one approaches our forces.” If they did, he said, “commanders always retain the right to self defense.”

The entire narrative put forward by the Pentagon was designed to erase the events of the past month, which began with Trump’s green-lighting of the Turkish invasion aimed at driving the SDF (whose main units are comprised of the Syrian Kurdish YPG militia, viewed by Ankara as a “terrorist” extension of Turkey’s own PKK Kurdish separatist movement) from the Turkish-Syrian border.

This was followed by Trump’s statements that he was putting an end to Washington’s “endless wars” and would “let someone else fight over this long-bloodstained sand” as all US troops would be withdrawn from Syria.

Just as his earlier statement in December 2018 that he was withdrawing US troops from Syria led to the resignation of his defense secretary, Gen. James Mattis, so last month’s announcement touched off a political firestorm in Washington, with denunciations of Trump’s “betrayal of the Kurds” coming from both Democrats and Republicans, as well as large sections of the military brass and the US intelligence apparatus.

In response, Trump shifted his position to a thuggish statement that US troops would remain in Syria to “take the oil” and that he was considering contracting ExxonMobil to exploit it.

Syrian President Bashar al-Assad responded to these statements by praising Trump’s “transparency.” Previous US presidents, he said, “commit crimes, but get Nobel prizes, and act like defenders of human rights and the noble unique US values—or Western values—but they are a group of criminals who act on behalf of lobbies.” Trump, on the other hand declares “we want oil … at least that’s honest,” he added.

The Pentagon’s claim of a continuity in the US “mission” has some truth to it, having nothing to do with either a “war on ISIS” or protecting the Kurds.

The US military is remaining in Syria, with an estimated 800 US troops as well as additional military contractors occupying its oil fields, in pursuit of the same strategic objectives that underlay the CIA-orchestrated war for regime change initiated under the Obama administration eight years ago.

Washington still seeks the overthrow of the Assad government and its replacement with a more pliant puppet regime in Damascus. At the same time, it is determined to roll back the influence of the Assad government’s principal backers — and US imperialism’s principal regional rivals — Iran and Russia. And it wants to prevent China from expanding its role in the Middle East.

The war in Syria, as Trump acknowledges, is about oil, as have been the catastrophic US imperialist interventions in Iraq and Libya and its threats of military aggression against Iran. These wars, which have claimed over a million lives and decimated entire societies, have been aimed at asserting US control over the energy resources of the Middle East, upon which Washington’s rivals, in particular China, depend. Their underlying purpose has been to employ military violence as a means of reversing the decline of the US dominance over the world capitalist markets.

By seizing the oil fields of Deir Ezzor province, Washington aims to deny critical energy resources that are needed by the government in Damascus to reconstruct Syria’s war-ravaged infrastructure and economy.

It has pursued this aim throughout the Syrian civil war, in which the Syrian Al Qaeda affiliate, the Al Nusra Front, first seized the oil fields, followed by ISIS and finally the Kurdish YPG militia.

The US military took no action to stop either Al Qaeda or ISIS from exploiting the fields and shipping oil across the border to Turkey, reaping hundreds of millions of dollars used to finance their operations. It was the Russian forces that finally bombed both the fields and the tanker trucks used to transport the oil.

The illegal US military occupation of the oil fields represents a direct provocation against Russia, which Syrian websites report has signed contracts with the Syrian government to extract oil, as well as China, which previously had oil investments in Syria and is poised to play a leading role in the country’s reconstruction.

Washington and its European allies have done everything in their power to strangle the Syrian government and starve the Syrian people into submission by denying the country energy supplies. Sweeping sanctions have been imposed against anyone buying Syrian oil, shipping oil to Syria or investing in its oil production.

Before the launching of the war for regime change in 2011, Syria’s oil production averaged about 400,000 barrels a day, making the country self-sufficient and accounting for roughly 35 percent of its export earnings. Some analysts suspect that the real output was substantially higher, with the excess turning those with regime connections into multi-millionaires.

The Trump administration’s actions—clearing the way for a Turkish invasion and then asserting control over the Syrian oil fields—have created an extremely unstable situation in Syria, escalating the threat of a far wider war.

Russian-backed Syrian government forces have already moved into oil fields in Hasakah province in the northeastern corner of Syria on the country’s borders with Turkey and Iraq. Damascus aims to restore production in the area, which was previously held by the SDF. If the US were to attempt to extend its control over Syrian oil into these areas, a military confrontation with Syrian and Russian forces would inevitably ensue.

As for Admiral Byrne’s reliance on US-Russian “deconfliction” agreements, Moscow has signaled that it is not prepared to cooperate with the US seizure of Syria’s oil fields.

“On this question, on the question of Syrian oil, we will not cooperate with our American colleagues,” Russia’s Deputy Foreign Minister Sergei Vershinin said Thursday. “We are convinced that it is the Syrian people who should be managing their natural resources, including oil.”

Whatever Washington’s or Moscow’s intentions, the reckless and provocative operations of US imperialism in Syria and the wider region threaten to ignite a far wider and even world war.