19 Nov 2019 – A “Google Alert” triggers emails alerting me to new headlines about Rwandan opposition leader Victoire Ingabire. Of late I’ve opened them with dread, fearing words like “prison,” “imprisoned,” “reimprisoned” or, worse yet, “murdered” or “assassinated.” So I was pleased to open one this week and learn instead that the Spanish Association for Human Rights is honoring her with one of their annual Human Rights Awards. Ingabire walks a knife edge; as her international profile rises, so does Rwandan President Paul Kagame’s rage.

Independent Spanish journalist Pascual Serrano Jímenez will receive the Spanish Association for Human Rights 2019 Journalism Award. Jíminez is a co-founder of the Rebelión news website, a former advisor to teleSUR, a current affairs publishing project director with the Akal publishing house, a founding member of Network of Intellectuals, Artists and Social Movements in Defense of Humanity, and a member of the editorial board of the satirical magazine El Jueves. He is the author of “Periodismo canalla: Los medios contra la informacion” (“Rogue journalism: The media against information”).

Jorge del Cura Antón, a human rights activist campaigning against the Spanish state’s use of torture, will be honored with the organization’s National Award with Engineering without Borders. As an official with Spain’s Administration of Justice, Antón visited prisons, collected and published information about everyday state abuse amounting to torture and founded the Association against Torture, which has, since the 1990s, played a role in key Spanish judicial proceedings.

Ingabire will share the International Award for bravery in defense of human rights with Nora Morales de Cortiñas. Cortiñas has been a member of the Mothers of the Plaza de Mayo in Argentina since 1977, when her son Carlos Gustavo Cortiñas, a member of the Peronist movement under the dictatorial regime of Jorge Rafael Videla, disappeared. She has traveled on all continents campaigning for universal justice and solidarity together with the families of missing persons in Argentina and around the world. She has also participated in social movements in defense of women and migrants and against external debt, corruption and impunity.

The Rwandan government will not allow Ingabire to leave the country, so she will accept the award in absentia during a December ceremony at the Instituto Cervantes in Madrid. It’s not yet known whether she will be able to join via video link.

During the same week that Ingabire’s Spanish award was announced, Rwandan President Paul Kagame seemed to threaten her personally, though not by name, in his speech (where he began speaking English at 8 minutes in) at a swearing-in ceremony for new government and military officials:

“I want to warn some people among us who hide behind different things. They hide behind politics, democracy, freedom or anything that we actually want. And it’s our responsibility to ensure there is democracy, there is peace, there is freedom, there is everything in our country. Primarily we are the ones who are responsible. First and foremost, we. Me and you.

“So for people who hide behind this nonsense and are even backed and praised by people outside, from outside … And for those who are actually involved, they’d better come clean so very fast. You have to come clean. You cannot be here benefiting from the peace and security that we have created, that we have paid for in blood over many years. And then you do things behind our backs and cause us problems. We will put you where you belong. There is no question about it.

“People who have been involved with the tragedy of genocide and have continued to play that politics and ideology and they have gone to prison, then they have come out of prison, and for it we have forgiven them, and then they start playing those games again, we will put you where you belong. And those ones who make noises about it, we will see what they will do.” 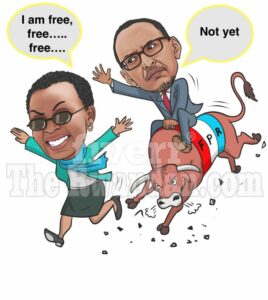 On Nov. 14, an editorial in Kagame’s deliriously hateful newspaper, the New Times of Rwanda, attacked Ingabire by name and attacked the Washington Times for quoting her in its Oct. 30 report, “Another disappearance of a political opponent raises fresh questions about Rwandan president.” Germany’s Deutsche Welle and other international outlets also quoted her regarding the disappearance of young Rwandan opposition leader Eugene Ndereyimana and the disappearance and murder of others.

On Nov. 16, the New Times of Rwanda published an even more malicious attack, “From RDR to DALFA-Umurinzi: Why Victoire Ingabire has never changed,” which reads like a prosecutor’s indictment:

“Recently, an organisation that calls itself ‘DALFA-UMURINZI’ was created. Its founder, Ingabire Victoire Umuhoza, is a convicted criminal who was never rehabilitated. She is not a politician, an opposition leader, but a criminal …

“Now, her FDU is part of what is known as the P5 Coalition. It brings together FDU-Inkingi (of Ingabire Victoire), MRCD-FLN (of Paul Rusesabagina and Faustin Twagiramungu), RNC (of Kayumba Nyamwasa), PDP-Imanzi, a PS-Imberakuri faction, FDLR, RUD-Urunana and CNRD. Similarly, this coalition is nothing but a terrorist group that has carried out deadly attacks on innocent civilians …

“In short, Victoire Ingabire is still committed to the preservation of the ideals of the forces behind the Genocide against the Tutsi. The Victoire Ingabire of RDR is no different from the one of Inkingi, or Umurinzi. She’s the same extremist and the same criminal.”

That’s ridiculous, like most of the poisonous vitriol the New Times of Rwanda publishes. No one could be more committed to nonviolence and ethnic reconciliation in Rwanda than Victoire Ingabire. I’ve known her for nearly 10 years, during which time I’ve been called a genocide denier, a genocide criminal, a hater, and even been assaulted just for speaking to her from a distance and bringing her voice to Pacifica Radio and various online journals and newspapers including the San Francisco Bay View.

Rwanda’s totalitarian government lives by its absolute, legally codified and enforced truth – that the 1994 Rwandan Genocide was “Genocide against the Tutsi,” and that Paul Kagame stopped it. Ingabire’s greatest crime, upon her return to Rwanda in 2010, was to say that “before, during, and after the genocide, Hutu people were killed,” that they were victims of crimes against humanity, and that Rwanda should commemorate all the victims of the Rwandan massacres, Hutu and Tutsi.

Rwandan American activist Claude Gatebuke has also pointed out that “Victoire Ingabire doesn’t believe in invading the neighbors,” most of all the Democratic Republic of the Congo, which Kagame has invaded, plundered, and occupied since November 1996, costing millions of Congolese lives.