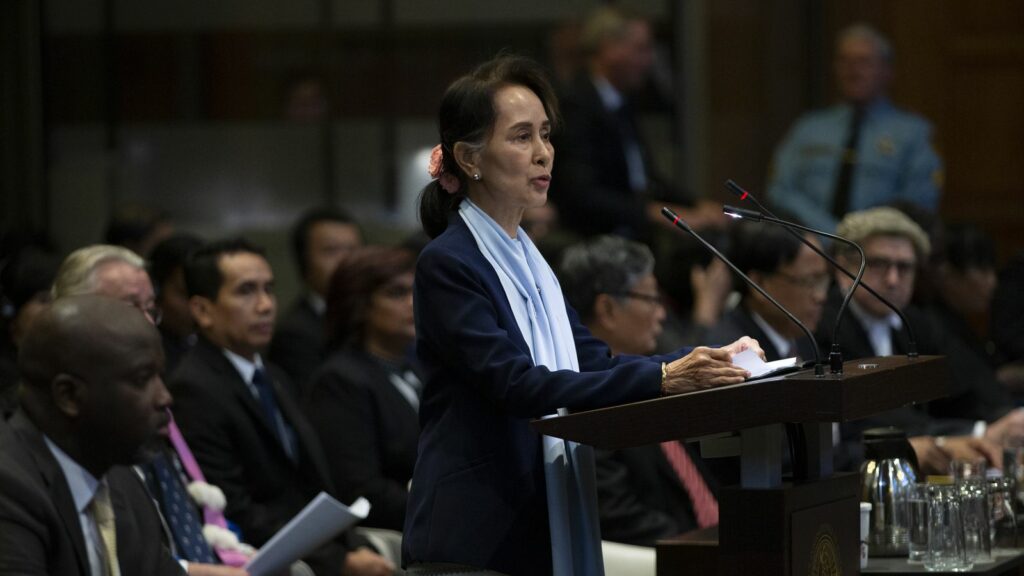 Myanmar’s leader Aung San Suu Kyi addresses judges of the International Court of Justice for the second day of three days of hearings in The Hague, Netherlands, Wednesday, Dec. 11, 2019. Aung San Suu Kyi will represent Myanmar in a case filed by Gambia at the ICJ, the United Nations’ highest court, accusing Myanmar of genocide in its campaign against the Rohingya Muslim minority. (AP Photo/Peter Dejong) [PETER DEJONG | AP]

Her testimony focused on the operations of militant Muslims, “internal armed conflict,” and the need for the military to “clear a locality of insurgents or terrorists.” It was tragic to hear this peace prize winner justify the well-documented brutality and murder of the Rohingya Muslims by parroting back the Myanmar military strategy for “counterinsurgency and counterterrorism.” Genocide and ethnic cleansing are not proportional responses to actions of small insurgency groups.

In August 2017 hundreds of thousands of Rohingya Muslims began fleeing to southern Bangladesh from a military-led crackdown in Myanmar, also known as Burma. Around 750,000 have now fled into Bangladesh by land and by boat. What caused this exodus? After decades of severe discrimination from the Buddhist majority in Myanmar, a Rohingya insurgent group launched a series of attacks and killed a dozen members of Myanmar’s security forces. The government military responded with massive brutality, which included mass raping of women, throwing babies to their deaths, burning whole villages to cinders, and murdering anyone who got in the way. Thousands of Rohingya were killed.

In July 2018 U.N. Secretary-General Antonio Guterres wrote: “These victims of what has been rightly called ethnic cleansing are suffering an anguish that can only stir a visitors heartbreak and anger. Their horrific experiences defy comprehension…the Rohingya people are left with two dreadful options: stay on in fear of death or leave everything simply to survive.” Myanmar’s military used the pretext of an armed terrorist uprising to unleash a now well-documented genocidal campaign to rid the country of Rohingya Muslims.

Appallingly, Ms. Aung San Suu Kyi utilizes the same arguments that organizers of genocide and ethnic cleansing deployed throughout the 20th century to validate mass murder. In case after case — from the Armenian genocide, to the Holocaust, to Bosnia — the actions of insurgent groups are distorted and enlarged in order to gain public support for brutal actions against innocent and unarmed populations.

Justice Minister Abubacarr M. Tambadou of Gambia understands this history and rejects the facile, false and misleading arguments presented to the court by Ms. Aung San Suu Kyi, stating: “It is indeed sad for our generation that 75 years after humankind committed itself to the words ‘never again,’ another genocide is unfolding right before our eyes,” he said. “Yet we do nothing to stop it.”

William Felice is professor of political science at Eckerd College. He is the author of The Ethics of Interdependence: Global Human Rights and Duties (2016). He can be reached via his website: willliamfelice.com.