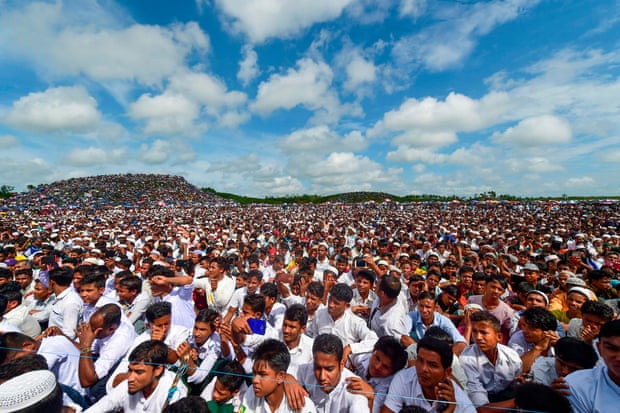 30 Nov 2019 – Rohingyas across Europe have planned mass rallies and a global campaign, “Boycott Myanmar”, to globally drum up their demands for justice as the International Court of Justice (ICJ) begins its first ever hearing on the genocide case against Myanmar on December 10.

The European Rohingya Council (ERC) and Myanmar Muslim Association Netherlands (MMAN) are organising a Rohingya solidarity rally from December 10 to 12 in front of the ICJ at The Hague, Netherlands.

“Join us at the historic event in the pursuits of long-awaited justice and accountability for Rohingya victims of Myanmar Genocide as ICJ hears the case filed by The Gambia against Myanmar for the gravest crimes it has committed,” according to an announcement issued by the ERC on Twitter.

In a video message on Twitter, Rohingya activist Mohammad Eleyas called for international community — especially the European Union — to stand for the rights of Rohingyas.

“We are Rohingyas, we are human beings. You know Myanmar committed genocide. We don’t have any ability to take precaution against Myanmar military and Buddhist extremists in prudence. So, we need your help and support,” he said.

Eleyas urged all to support Gambia, which has submitted a case with the ICJ against Myanmar on November 11, accusing it of violating the UN Convention on the Prevention and Punishment of the Crime of Genocide.

Since August 2017, some 7,50,000 Rohingyas have fled a brutal military campaign in Rakhine and took shelter in Bangladesh, joining some 3,00,000 others who had fled earlier waves of violence.

According to a report of the Ontario International Development Agency, Myanmar state forces killed nearly 24,000 Rohingyas and raped thousands of women and girls since August 2017.

The UN termed the atrocities a classic example of ethnic cleansing. Over the last two years, UN Security Council took no concrete action against Myanmar mainly because of opposition from China and Russia that have veto powers.

Apart from ICJ, the International Criminal Court at The Hague also approved full investigation into the forced deportation of Rohingyas by Myanmar to Bangladesh.

Rohingyas now see a ray of hope for justice and believe Myanmar will eventually have to grant them citizenship, which has been denied since 1982, and all other basic rights, including freedom of movement, health and education.

The Rohingyas across the globe are campaigning to mobilise support from the international community.

Nay San Lwin, campaign coordinator of Free Rohingya Coalition, said they are mobilising some 100 Rohingyas in The Hague from all across the globe, mostly from Europe.

“We will hold protest rally against Myanmar’s genocide. The ICJ case can change things for us. There’s a lot of enthusiasm among the Rohingyas all over the world,” he told The Daily Star from Germany where he lives.

“If the Court orders Myanmar to take provisional measures to stop genocide, it will mean a lot for the Rohingyas,” Lwin said on Tuesday.

To keep the global pressure on, Lwin said, Free Rohingya Coalition is going to launch an online campaign called “Boycott Myanmar” on December 9. On this day in 1948, UN General Assembly adopted the genocide convention.

There are a number of western and Asian countries making big investments in Myanmar, he said, adding that they are urging all to cut ties with Myanmar.

Anyone from any part of the world can sign the online petition and send those to the countries and companies calling for boycotting Myanmar, he said.

“We urge all to join our campaign,” Lwin added.