Cruising Pamir Highway, the Heart of the Heartland (II) 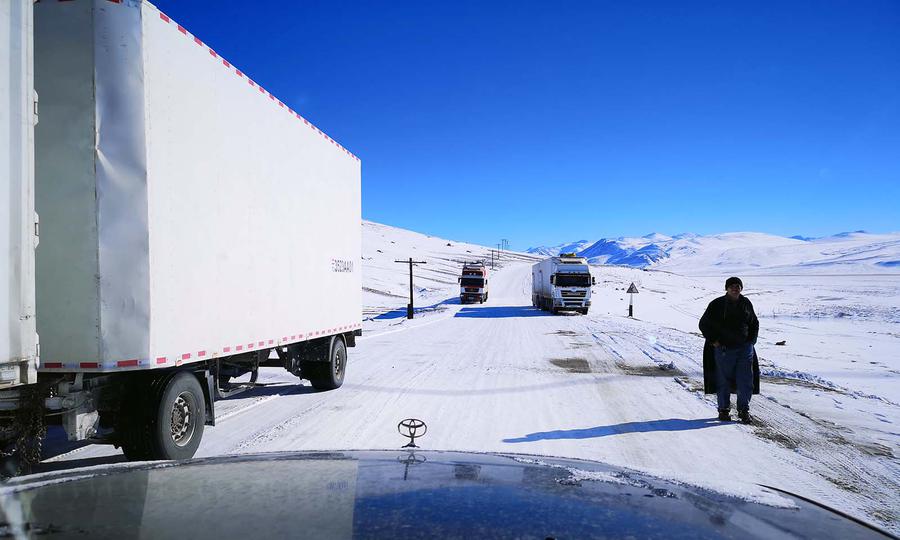 A privileged microcosm of what is evolving as the intersection between the New Silk Roads and Greater Eurasia.

14 Dec 2019 – Traveling the Pamir Highway, we’re not only facing a geological marvel and a magic trip into ancient history and customs. It’s also a privileged window on a trade revival that will be at the heart of the expansion of the New Silk Roads.

Khorog is the only town in the Pamirs – its cultural, economic and educational center, the site of the multi-campus University of Central Asia, financed by the Agha Khan foundation. Ismailis place tremendous importance on education.

Badakhshan was always world-famous for lapis lazuli and rubies. The Kuh-i-Lal ruby mine, south of Khorog, was legendary. Marco Polo wrote that in “Syghinan” (he was referring to the historical district of Shughnan) “the stones are dug on the king’s account, and no one else dares dig in that mountain on pain of forfeiture of life”.

Shughnan worshipped the sun, building circular structures with the corresponding solar symbolism. This is what we see in Saka graves in the Eastern Pamir. As we keep moving east, the settled Pamiri culture, with its profusion of orchards of apricots, apples and mulberries, gives way to semi-nomadic Kyrgyz life and irrigated villages are replaced by seasonal yurt camps (not at this time of the year though, because of the bitter cold.)

At Langar, the last village of the Wakhan, rock paintings depict mountain goats, caravans, horse riders with banners, and the Ismaili symbol of a palm with five fingers. Archeologist A. Zelenski, in fascination, called the historical monuments of the Wakhan “the Great Pamir Route.” Aurel Stein stressed this was the main connection between Europe and Asia, thus between the whole classical world and East Asia, with Central Asia in between. We are at the heart of the Heartland.

Following the Wakhan all the way would lead us to Tashkurgan, in Xinjiang. The Pakistani border, close to the Karakoram Highway, is only 15 km to 65 km away, across forbidding Afghan territory.

It’s the Koyzetek pass (4,271 meters) that finally leads to the Eastern Pamir plateau, which the Chinese called Tsunlin and Ptolomy called Iamus, shaped like a giant shallow dish with mountain ranges at the edges and lakes at record altitudes. Marco Polo wrote, “The land is called Pamier, and you ride across it for twelve days together, finding nothing but a desert without habitations or any green thing, so that travelers are obliged to carry with them whatever they need. The region is so lofty and cold that you don’t even see any birds flying. And I must notice also that because of this great cold, fire does not burn so brightly and give out so much heat as usual, not does it cook effectually.”

Murghab, peopled by Kyrgyz – whose summers are spent in very remote herding camps – revolves around a mini-bazaar in containers. If we follow the Aksu river – once considered the source of both the water and the name of the Oxus – we reach the ultimate, remote corner of Central Asia: Shaymak – only 80 km from the tri-border of Afghanistan, Pakistan and China.

The Little Pamirs are to the south. As I reported for Asia Times way back in 2001, it was in this area, crammed with the most important Silk Roads passes of both China and Pakistan, that Osama bin Laden might have been hiding, before he moved to Tora Bora.

From Murghab, I had to inspect the Kulma pass (4,362 meters high), a New Silk Road border. The road – made by China – is impeccable. I found lonely Chinese container truck drivers and businessmen from Kashgar driving made-in-China minivans across the Pamirs to be sold in Dushanbe. 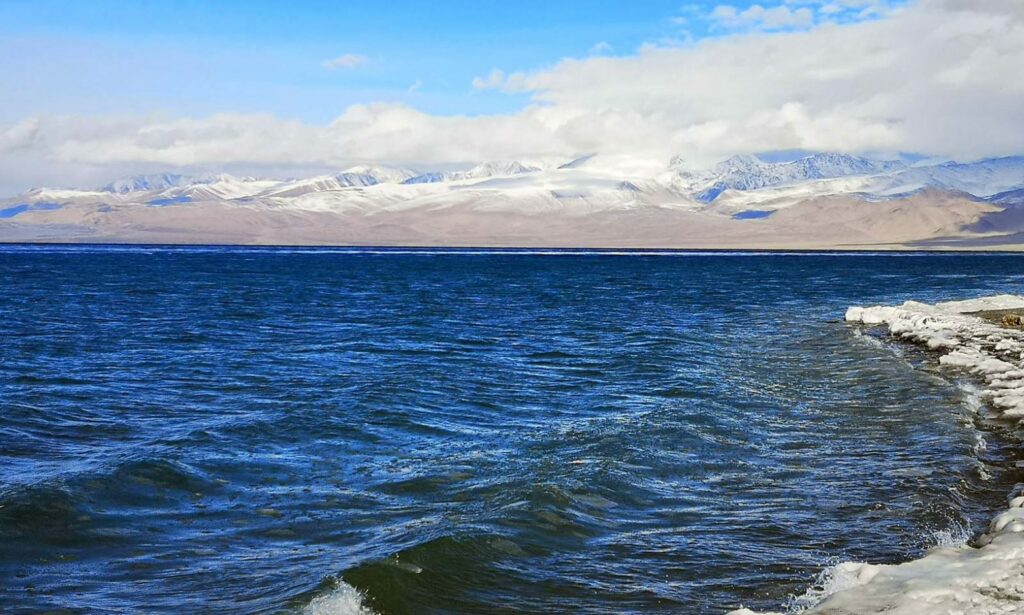 On the High Pamirs we find around 800 ancient lakes created by earthquakes, tectonic activity and glaciers. Yashilkul lake (“Blue Water”), at 3,734 meters frozen this time of the year, sits in a plateau scouted by Stone Age hunters. Tajik archeologist V. Ranov found rock paintings of horses and carts, attributes of Mitra, the Persian god of the Sun. During the 10th to 3rd centuries B.C, the plateau was inhabited by nomadic tribes of the Persian-speaking Sakas.

From Shughnan to Ishkoshim, here we are in what the ancients called “The country of the Sakas.”

From Scythians to containers

The vast Scythian steppes that range from the Danube all the way to China were inhabited by a vast confederation of tribes. Then, in the 2nd to 1st centuries B.C., the tribes started moving to the east of the Greco-Bactrian state. Some of them settled in the Pamirs and became the ethno-genetic component of the Pamiri ethnicity. Alex, my driver, is a true Pamiri from Khorog. He’s also the real Pamir Highway Star with his badass black Land Cruiser. (“It’s a killing machine/ it’s got everything,” as Deep Purple immortalized it.) 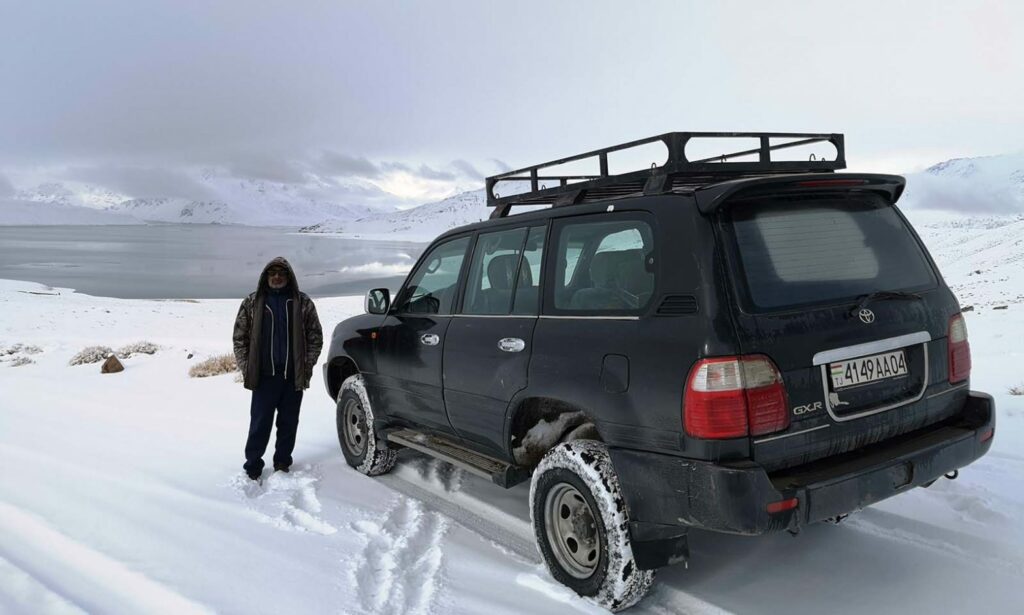 The highlight of the Eastern Pamirs is the spectacular blue inland, saltwater Karakul Lake, formed 10 million years ago by a meteor. Under the sun, it’s a radiant turquoise; this time of the year, I saw it deep, deep blue, not really the “Black Lake” that its name implies. Karakul because of its slight salinity was not frozen. This is chong (big) Karakul, the older brother of the kichi (small) Karakul across the border in Xinjiang, which I had the pleasure of visiting in my Karakoram Highway travels.

The High Pamirs are right behind Karakul, concealing the 77-km-long Fedchenko glacier. East of the lake, if you could survive a trek in Arctic conditions, is Xinjiang. The early Tang dynasty wandering monk Xuanzang was here in 642 (he thought the lake was people by dragons). Marco Polo was here in 1274. 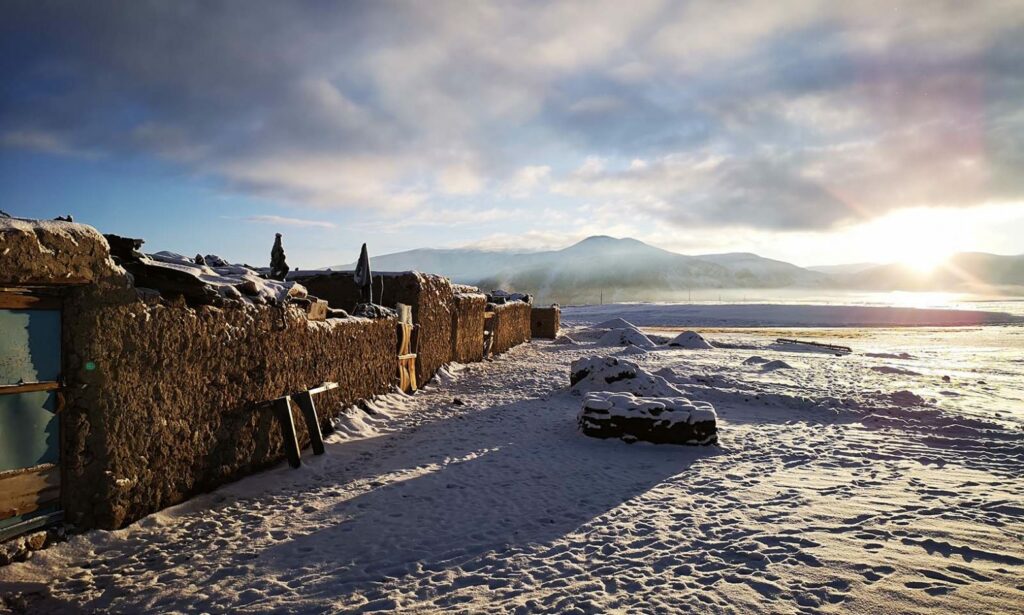 It’s a tough life at Bulungkul, with the atmosphere of an Arctic station. Temperatures can drop as low as -63C in winter.
Photo: Pepe Escobar / Asia Times

Our base to explore Yashilkul and later Karakul was Bulungkul – this time of the year a sort of Arctic station, with only 40 houses served by solar panels in the middle of nowhere, and temperatures hovering around minus 22 Celsius. It’s the toughest of lives. They told me that in winter the temperature drops to -63C.

Farther down the road, I took a diversion east to observe the Kulma pass, at 4,363 meters the official Tajik border with China, reached by a – what else? – made-by-China road, opened in 2004 following the ancient Silk Road.

The Tajik-Kyrgyz border at the Kyzyl-Art pass looked like a scene from Tarkovsky’s Stalker, utterly Soviet-style desolate except for a shared taxi loaded with Kyrgyz going to Khorog. From there, it’s a spectacular drive all the way to the crossroads of Sary Tash, and through the head-spinning, 3,615 meter-high Taldyk pass, towards Osh, the gateway to the Ferghana valley. 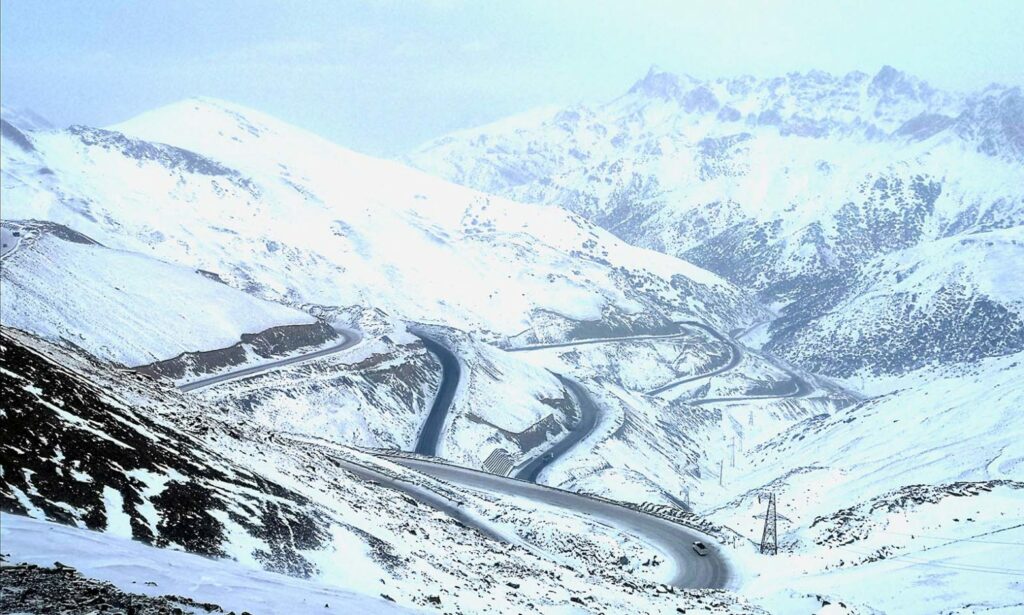 The Taldyk pass in southern Kyrgyzstan, all the way to Osh.
Photo: Pepe Escobar / Asia Times

All across this mesmerizing Central Asia/Heartland journey, especially in the bazaars, we see in detail the crossroads of pastoral nomadism and irrigation culture, fertilized century after century by cross-cultural Silk Road trade involving herders, farmers, merchants, all of them part of commodity trading and provisioning for the caravans.

We delve into the vortex of immensely rich social, religious, scientific, aesthetic and ideological influences – especially from Persia, India, China and Iran. The shift from overland to sea trade in the 16th century – the start of European world domination – in fact never erased the traditional routes to India via Afghanistan, China via Xinjiang and Europe via Iran. Trade remains the top factor in Central Asian life.

Today the Pamir Highway is a privileged microcosm of what is slowly but surely evolving as the intersection between the New Silk Roads and Greater Eurasia – with its main hubs configured by Russia, China, Iran, Pakistan and – it may be hoped – India.

The ultimate crossroads of civilizations, the Heartland, is back – once again at the heart of history.