Pamir Highway: The Road on the Roof of the World (I) 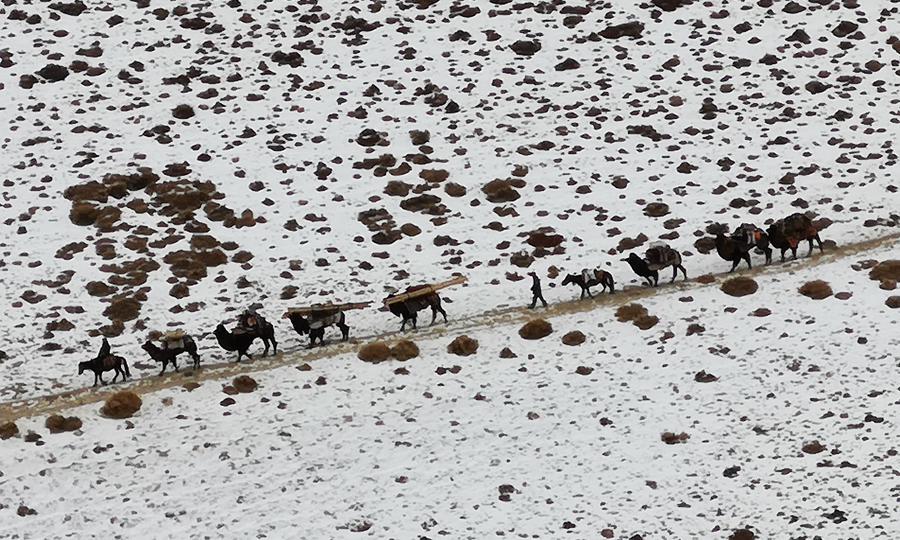 These are the ancient Silk Roads the Taliban will never be able to reach.

12 Dec 2019 – This is arguably the ultimate road trip on earth. Marco Polo did it. All the legendary Silk Road explorers did it. Traveling the Pamir Highway back to back, as a harsh winter approaches, able to appreciate it in full, in silence and solitude, offers not only a historical plunge into the intricacies of the ancient Silk Road but a glimpse of what the future may bring in the form of the New Silk Roads.

This is a trip steeped in magic ancient history. Tajiks trace their roots back to tribes of Sogdians, Bactrians and Parthians. Indo-Iranians lived in Bactria (“a country of a thousand towns”) and Sogdiana from the 6-7th centuries BC to the 8th century AD Tajiks make up 80% of the republic’s population, very proud of their Persian cultural heritage, and kin to Tajik-speaking peoples in northern Afghanistan and the region around Tashkurgan in Xinjiang.

Proto-Tajiks and beyond were always at the fringe of countless empires – from the Achaemenids, Kushan and Sogdians to the Greco-Bactrians, the Bukhara emirate and even the USSR. Today many Tajiks live in neighboring Uzbekistan – which is now experiencing an economic boom. Due to Stalin’s demented border designs, fabled Bukhara and Samarkand – quintessential Tajik cities – have become “Uzbek.”

Bactria’s territory included what are today northern Afghanistan, southern Tajikistan and southern Uzbekistan. The capital was fabled Balkh, as named by the Greeks, carrying the informal title of “mother of all cities.”

Sogdiana was named by the Greeks and Romans as Transoxiana: between the rivers, the Amu-Darya and the Syr-Darya. Sogdians practiced Zoroastrianism and lived by arable agriculture based on artificial irrigation. 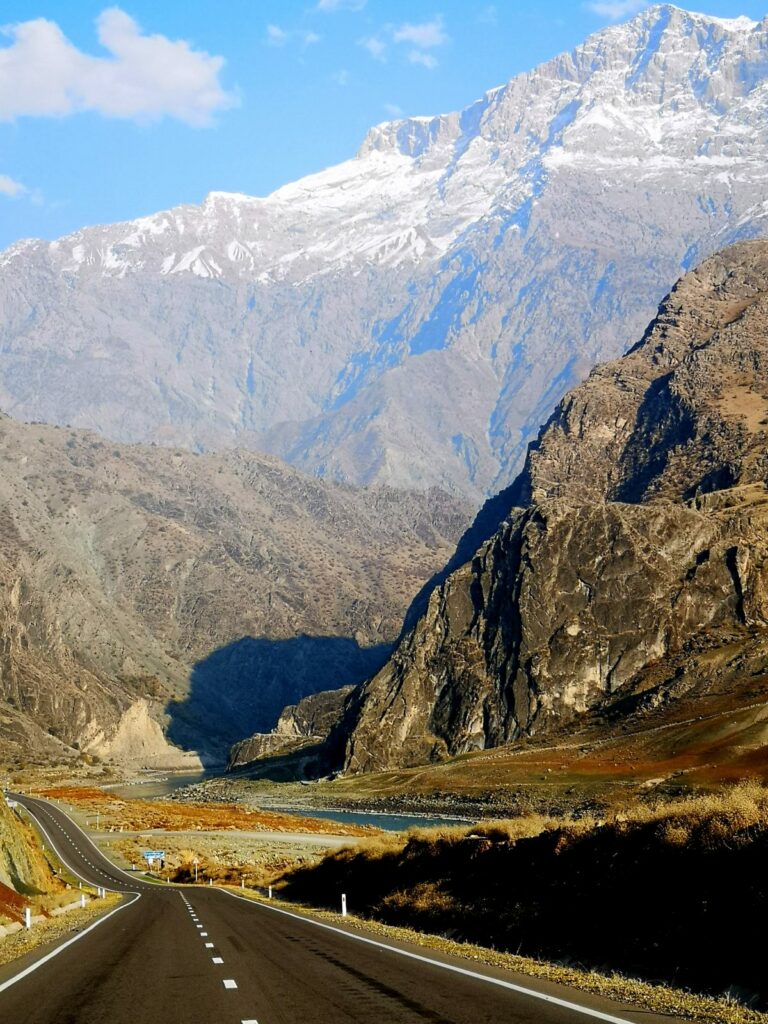 We all remember that Alexander the Great invaded Central Asia in 329 B.C. After he conquered Kabul, he marched north and crossed the Amu-Darya. Two years later he defeated the Sogdians. Among the captured prisoners was a Bactrian nobleman, Oxyartes, and his family.

Alexander married Oxyartes’s daughter, the ravishing Roxanne, the most beautiful woman in Central Asia. Then he founded the city of Alexandria Eskhata (“The Farthest”) which is today’s Kojand, in northern Tajikistan. In Sogdiana and Bactria, he built as many as 12 Alexandrias, including Aryan Alexandria (today’s Herat, in Afghanistan) and Marghian Alexandria (today’s Mary, formerly Merv, in Turkmenistan).

By the middle of the 6th century, all these lands had been divided among the Turkic Kaghans, the Sassanian Empire and a coalition of Indian kings. What always remained unchanged was the emphasis on agriculture, town planning, crafts, trade, blacksmithing, pottery, manufacture of copper and mining.

The caravan route across the Pamirs – from Badakshan to Tashkurgan – is the stuff of legend in the West. Marco Polo described it as “the highest place in the world.” Indeed: the Pamirs were known by the Persians as Bam-i-Dunya (translated, appropriately, as “roof of the world”).

The Pamirs are the southern boundary of Central Asia. And let’s cut to the chase, the most fascinating region in the whole of Eurasia: as wild as it gets, crammed with breathtaking peaks, snow-capped spires, rivers ragged with crevasses, huge glaciers – a larger-than-life spectacle of white and blue with overtones of stony gray.

This is also the quintessential crossroad of empires – including the fabled Russo-British 19th century Great Game. No wonder: picture a high crossroads between Xinjiang, the Wakhan Corridor in Afghanistan and Chitral in Pakistan. Pamir may mean a “high rolling valley.” But the bare Eastern Pamirs might as well be on the moon – traversed less by humans than curly-horned Marco Polo sheep, ibex and yaks.

Countless trade caravans, military units, missionaries and religious pilgrims also made the Pamir Silk Road known as “road of Ideologies.” British explorers like Francis Younghusband and George Curzon hit the upper Oxus and mapped high passes into British India. Russian explorers such as Kostenko and Fedchenko tracked the Alai and the great peaks of the northern Pamir. The first Russian expedition arrived in the Pamirs in 1866, led by Fedchenko, who discovered and lent his name to an immense glacier, one of the largest in the world. Trekking toward it is impossible as winter approaches.

And then there were the legendary Silk Road explorers Sven Hedin (in 1894-5) and Aurel Stein (1915), who explored its historical heritage. 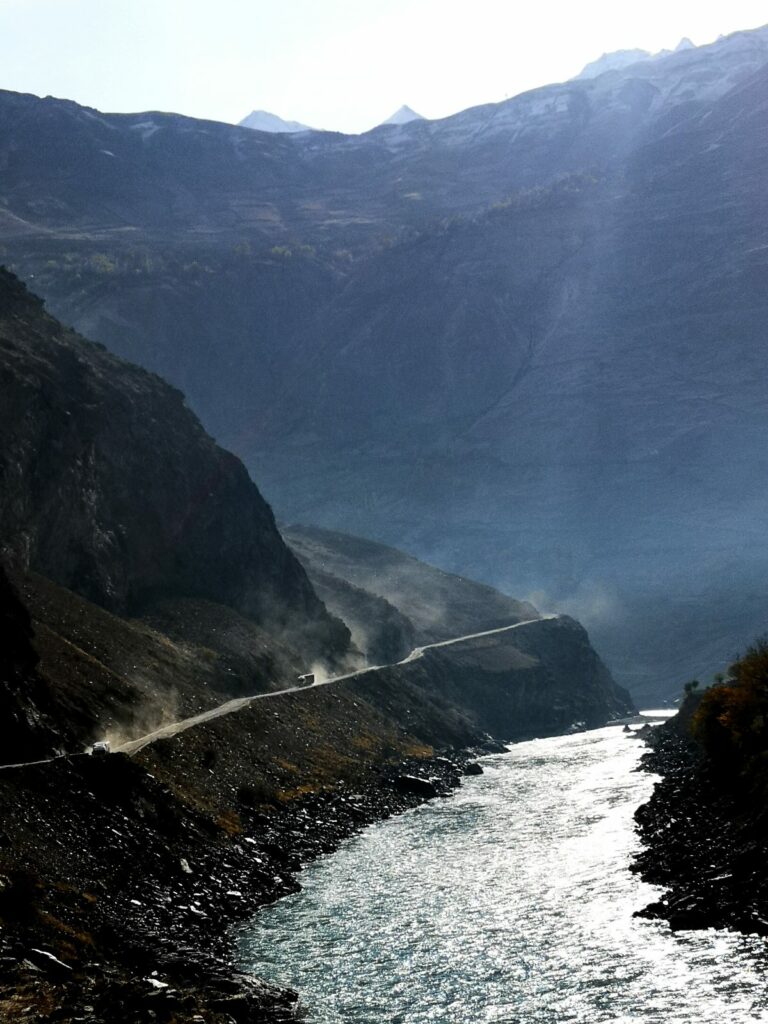 The Pamir Highway version of the Silk Road was actually built by the Soviet Union between 1934 and 1940, predictably following ancient caravan tracks. The name of the region remains Soviet: the Gorno-Badakhshan Autonomous Oblast (GBAO). To travel the highway, one needs a GBAO permit.

For no less than 2,000 years – from 500 B.C. to the early 16th century – camel caravans carried not only silk from East to West, but goods made of bronze, porcelain, wool and cobalt, also from West to East. There are no fewer than four different branches of the Silk Road in Tajikistan. The ancient Silk Roads were an apotheosis of connectivity: ideas, technology, art, religion, mutual cultural enrichment. The Chinese, with a keen historical eye, not by accident identified “common legacy of mankind” as the conceptual/philosophical base for the Chinese-led New Silk Roads, or Belt and Road Initiative. 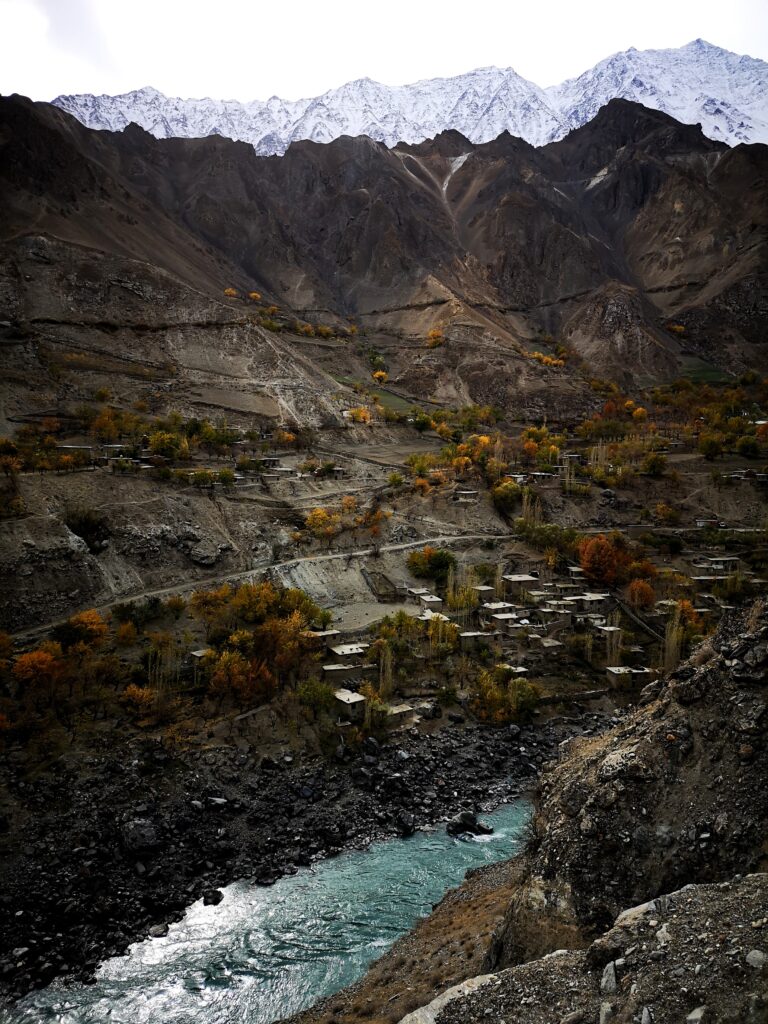 Have China upgrade, will travel

In villages in Gorno-Badakhshan, stretched out along stunning river valleys, life for centuries has been about irrigation farming and seasonal-pasture cattle farming. As we progress toward the barren Eastern Pamirs, the story mutates into an epic: how mountain people eventually adapted to living at altitudes as high as 4,500 meters.

In the Western Pamirs, the current road upgrade was by – who else? – China. The quality is equivalent to the northern Karakoram Highway. Chinese building companies are slowly working their way towards the Eastern Pamirs – but repaving the whole highway may take years. 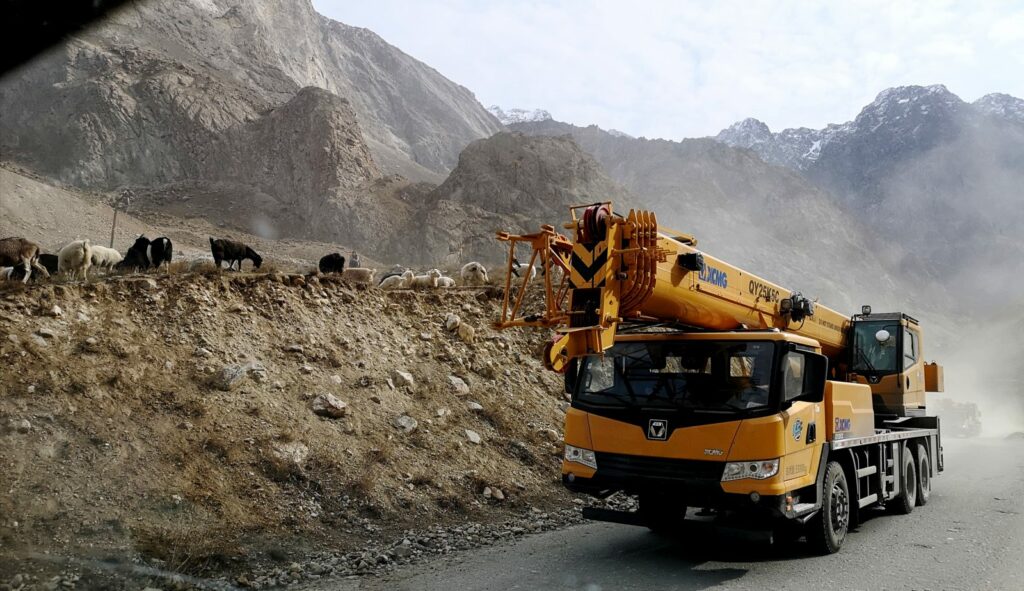 The Chinese are coming: upgrading the highway in the Western Pamirs.
Photo: Pepe Escobar 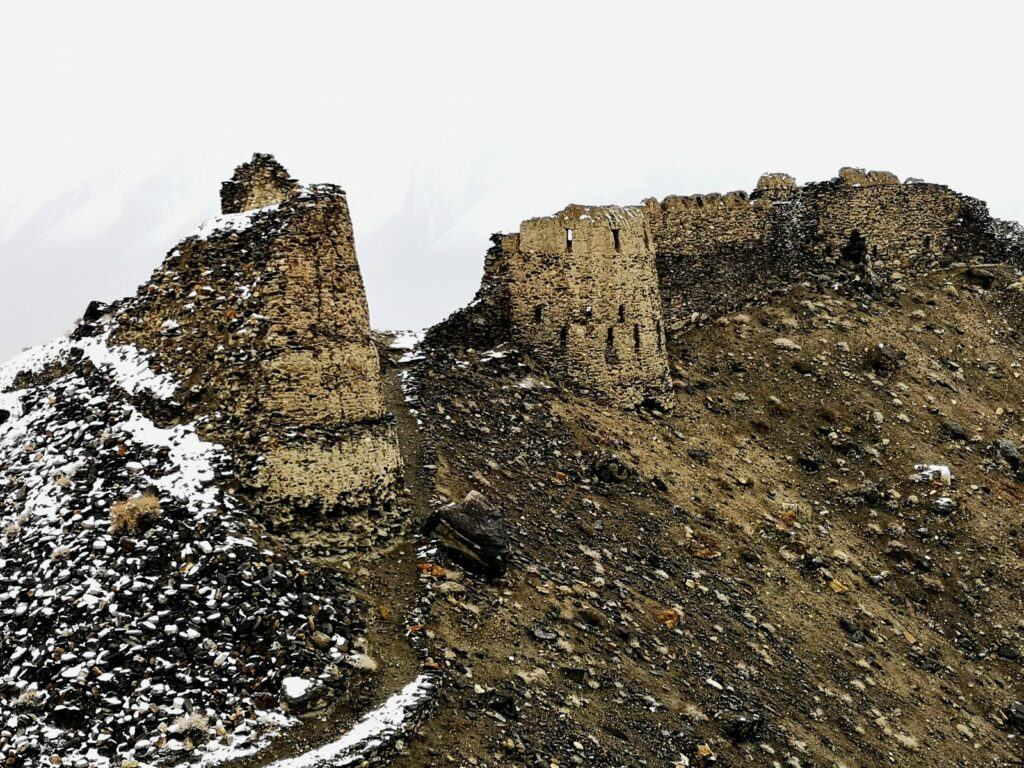 The 3rd century BC Yamchun fortress, known as ‘The Castle of the Fire Worshippers.’ Photo: Pepe Escobar

The Pyanj river draws a sort of huge arc around the border of Badakhshan in Afghanistan. We see absolutely amazing villages perched on the hills across the river, including some nice houses and owners with an SUV instead of a donkey or a bike. Now there are quite a few bridges over the Pyanj, financed by the Aga Khan foundation, instead of previous planks jammed with stones suspended above vertiginous cliffs.

From Qalaykhumb to Khorog and then all the way to Ishkoshim, the Pyanj river establishes the Afghan border for hundreds of kilometers – traversing poplar trees and impeccably-tended fields. Then we enter the legendary Wakhan valley: a major – barren – branch of the Ancient Silk Road, with the spectacular snow-capped peaks of the Hindu Kush in the background. Farther south, a trek of only a few dozen kilometers of trekking, it’s Chitral and Gilgit-Baltistan in Pakistan.

The Wakhan could not be more strategic – contested, over time, by Pamiris, Afghans, Kyrgyz and Chinese, peppered with qalas (fortresses) that protected and taxed the Silk Road trade caravans.

The star of the qalas is the 3rd century B.C. Yamchun fortress – a textbook medieval castle, originally 900 meters long and 400 meters wide, set in a virtually inaccessible rocky slope, protected by two river canyons, with 40 towers and a citadel. Legendary Silk Road explorer Aurel Stein, who was here in 1906, on the way to China, was gobsmacked.The fortress is locally known as the “Castle of the Fire Worshippers”.

Pre-Islamic Badakhshan was Zoroastrian, worshipping fire, the sun and spirits of ancestors and at the same time practicing a distinct Badakhshani version of Buddhism. In fact, in Vrang, we find the remains of 7th-8th century Buddhist man-made caves that could have also been a Zoroastrian site in the past. The early Tang dynasty wandering monk Xuanzang was here, in the 7th century. He described the monasteries and, tellingly, took notice of a Buddhist inscription:  “Narayana, win.”

Ishkoshim, which Marco Polo crossed in 1271 on the way to the upper Wakhan, is the only border crossing in the Pamirs into Afghanistan open to foreigners. To talk of “roads” on the Afghan side is audacious. But old Silk Road tracks remain, negotiable only with a study Russian jeep, delving into Faizabad and farther into Mazar-i-Sharif.

Here are the parts the 18-year-long, trillion-dollar, Hindu Kush-of-lies-told American war on Afghanistan never reaches. The only “America” available is Hollywood blockbusters on DVDs at 30 cents apiece.

I was very fortunate to spot the real deal: a camel caravan, straight from the ancient Silk Road, following a track on the Afghan side of the Wakhan. They were Kyrgyz nomads. There are roughly 3,000 Kyrgyz nomads in the Wakhan, who would like to resettle back in their homeland. But they are lost in a bureaucratic maze – even assuming they secure Afghan passports.

These are the ancient Silk Roads the Taliban will never be able to reach.