DRC: I Saw the Unbearable Grief Inflicted on Families by Cobalt Mining–I Pray for Change

When Raphael turned 15, he started digging tunnels at the cobalt mine where he worked – two years later he was dead. 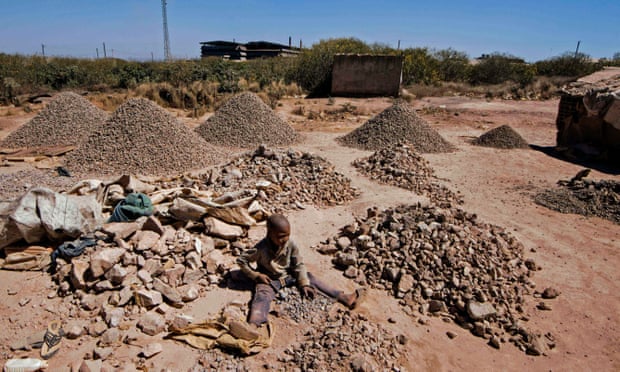 A child breaks rocks at a cobalt pit in the DRC. Photograph: Junior Kannah/Getty

16 Dec 2019 – Bisette sits before me, her face drawn with woe. Even though this is my second research trip to the cobalt provinces of the Democratic Republic of the Congo, I am ill-prepared for the torment I will witness. We thank Bisette for her courage, for we know she is fearful that even a rumour that she is speaking to us could result in brutal reprisals against her and her family. She inhales sharply and recounts a tale of unimaginable grief.

Raphael was born to Bisette’s sister, but after both his parents died when he was a baby, Bisette raised Raphael as her own son. She says he was a bright and cheerful child. Raphael loved to learn but, when he was 12 years old, the family could no longer afford the $6 (£4) a month required to send him to school. Instead, Bisette says Raphael did what most children in his village had to do: he went to work as a surface digger at a nearby industrial cobalt mine near Kolwezi.

When Raphael turned 15, he was strong enough to dig tunnels at the site. Bisette says that on 16 April 2018, Raphael was deep underground with a group of 30 diggers when the tunnel above him collapsed. She heard the news and rushed to the site. “I prayed to God: ‘Please, let my son be alive,’” she says. When she arrived at the mine, she says, she was informed that no one had survived.

I try to imagine the moment – when Raphael was crushed in the earth, screaming for his mother, suffocating in darkness, dying alone.

Every lithium-ion rechargeable battery in smartphones, tablets, laptops, and electric vehicles requires cobalt to recharge. Approximately two-thirds of the global cobalt supply is mined in DRC. A considerable portion of this supply is mined by an informal workforce of artisanal miners, called “creuseurs”.

Children and creuseurs are not formally allowed at large, industrial cobalt mines. But Bisette and scores of other families we interviewed said their children had been working at sites operated by foreign mining companies for years.

I first went to DRC in the summer of 2018 to research the conditions under which creuseurs mine cobalt, intending to promote change through academic research, writing a report, and policy engagement. That plan changed irrevocably the day I met Elodie. 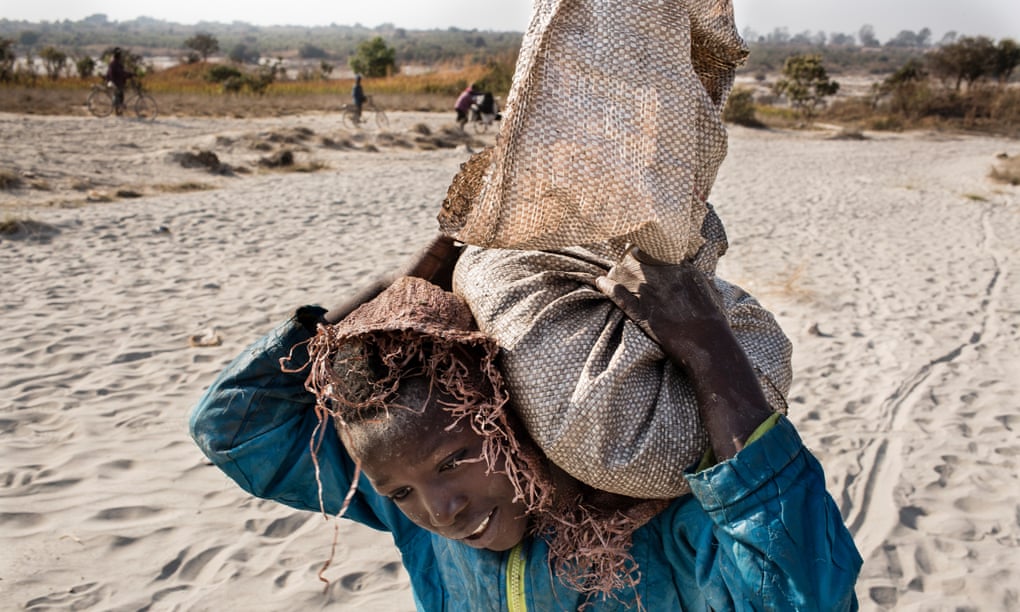 I found the child, a girl caked in dirt with an ailing newborn strapped to her back, hacking at the ground for cobalt at Lake Malo, not far from Kolwezi. Her limbs were like sticks, her face was crusted with mucus and she had a rib-cracking cough. The horror of her wretched existence could never be remedied by an academic report, I decided. An attempt had to be made to hold someone accountable.

I returned home and tracked down Terrence Collingsworth, a human rights lawyer and expert in strategic litigation. Together with my Congolese colleague, Roger-Claude Liwanga, a professor at Emory University, we coordinated with partners in DRC to approach families deep in the cobalt territory. We finally found 14 families who wanted to tell their stories. By September 2019, Terrence, Roger, and I were sitting down in DRC to meet Bisette.

On Monday, Bisette and 13 other families have launched a landmark legal case in DC Federal Court in the United States against Apple, Microsoft, Dell, Google and Tesla for what they consider to be the companies’ complicity in the injuries and deaths of their children. In documents filed with the court, the plaintiffs claim that the defendants are liable for forced labour under US federal law, which they allege took place at some of the biggest industrial cobalt sites in the Congo – Mashamba East, Lake Malo B-5, Commus and Tilwizembe. I am acting as an expert witness in the case.

This lawsuit is intended to compel the defendants to remedy the horrific conditions at the bottom of cobalt supply chains. Whether our legal system agrees that they should be held to account for the death and injury of these children remains to be seen. Whatever the outcome, it will be the first time that the voices of the children suffering in the dark underbelly of one of the richest supply chains in the world will be heard in a court of law.

The day before I met Bisette, I experienced quite viscerally just how deadly cobalt mining can be. I was documenting a cobalt site near the village of Kapata, when I learned that a tunnel dug by creuseurs had collapsed, not 100 meters from where I was standing. I rushed to the site, but the area was already under guard by the Congolese military when I arrived, so it was impossible to gain entry. Bereaved family members wailed with terror. Behind the dust and madness, it soon became clear – no one had survived. According to people at the mine, 63 people were buried alive that day.

Perhaps the greatest tragedy of all is that global tech companies have yet to devote adequate attention and resources to ensure safety, dignity, and decency for those who mine their cobalt in DRC. I pray that every consumer will refuse to buy any new cobalt-containing device until they do so.

Bisette finishes the dreadful tale of her Raphael’s demise, but her torment is far from over. She is heading next to Kapata. Her nephew was one of the 63 people buried alive in the tunnel collapse the previous day.

A change comes over her features that haunts me to this day – the horror of a mother imagining her child buried alive. She cries out: “Our children are dying like dogs.”

Some names have been changed. All the companies named have been approached for comment.

Siddharth Kara is an author, research, and leading expert on modern slavery and child labour. He holds academic positions at Harvard University and University of California, Berkeley.