The European parties did not trigger a mechanism in the accord that could renew UN sanctions against Iran. 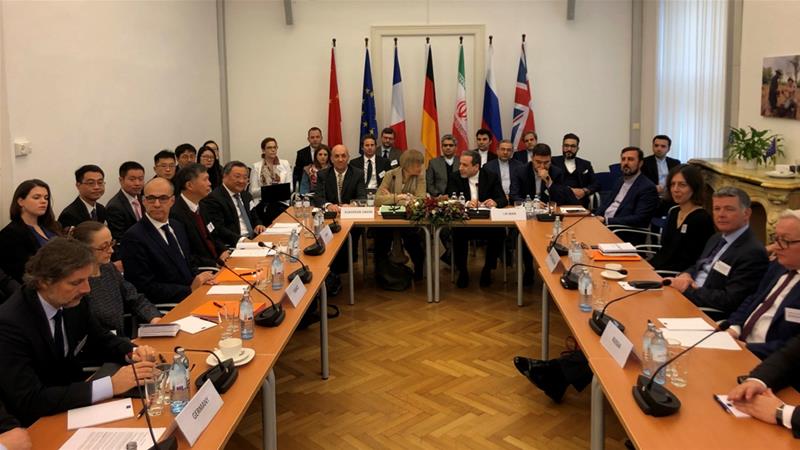 All remaining signatories to the 2015 nuclear deal met in Vienna on Friday 6 Dec 2019.
[Francois Murphy/Reuters]

6 Dec 2019 – European parties to the 2015 nuclear deal have demanded that Iran stop taking steps away from the accord but stopped short of triggering a mechanism that could renew United Nations sanctions, during a rare meeting between the pact’s remaining signatories.

Today’s three-hour meeting in Vienna, the first with all parties since July, came as tensions continue to rise with Tehran systematically rolling back its commitments under the deal following Washington’s withdrawal last year and imposition of “maximum pressure” sanctions.

Iranian officials have accused the European parties who are working to salvage the accord – the UK, France, and Germany – of not doing enough to protect Tehran from the sanctions, which officials have said justifies their non-compliance.

Since last month, European members have in turn begun raising the possibility of triggering the so-called “dispute resolution mechanism” outlined in the accord, which could lead to the resumption of UN sanctions on Iran.

The talks were further strained by clashes on Thursday over accusations from the UK, France and Germany that Iran is developing nuclear-capable ballistic missiles that were “inconsistent” with a 2015 UN Security Council (UNSC) resolution that underpins the nuclear accord. Iranian Foreign Minister Mohammad Javad Zarif called the claims, made in a letter to the UN secretary-general, “desperate falsehoods”.

Chinese delegation head Cong Fu told reporters after Friday’s meetings that all parties remained committed to the deal and the dispute resolution mechanism was not triggered.

“All countries need to refrain from taking actions that may further complicate the situation,” the senior diplomat said.

“Bringing this issue to the [UN] Security Council is not in anybody’s interest, except the US maybe,” he added.

Other envoys did not talk as they left the meeting.

Russia’s representative, ambassador Mikhail Ulyanov, said on Twitter that meeting participants remained “fully united in their support and commitment” to the accord despite “all the difficulties and all the differences”.

A European diplomat told the Reuters news agency that the UK, France and Germany stressed the need for Iran’s compliance during the meeting.

Diplomats have said a decision on triggering the mechanism was unlikely to be made until January, when Iran is expected to further scale back its adherence to the pact, under which it curtailed its nuclear activities in return for relief from sanctions.

A senior Iranian official said “the clock is ticking” for the European parties.

“They try to keep Iran in the deal but then take no action against America’s bullying and pressure,” the official said, according to Reuters.

Iran’s envoy to the talks declined to take questions after the meeting.

Highlighting the current tension, the Iranian delegation had earlier threatened to boycott the meeting after discovering that an exiled Iranian opposition group planned an anti-government protest outside the hotel where the meeting was due to take place.

The European Union, which hosted the talks, then scrambled to move the meeting to its nearby mission to the UN.