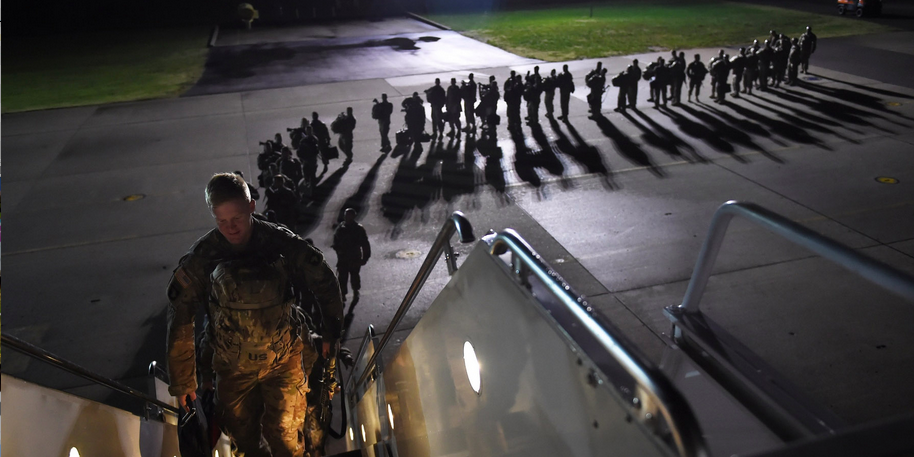 26 Dec 2019 – In an earlier article (FAIR.org, 12/18/19) regarding the Washington Post’s Afghanistan Papers (12/9/19), I discussed how the Post’s exposé also exposed the Post as one of the primary vehicles US officials use to spread their lies, and why it’s impossible for corporate media outlets like the Post to raise more substantive questions about the deceptive nature of US foreign policy.

But those aren’t the only significant takeaways. The Afghanistan Papers should also be considered an excellent case study of contemporary colonial propaganda, and yet another example of corporate media criticizing US wars without opposing US imperialism.

Edward Herman and Noam Chomsky’s famous analysis of media coverage of the Vietnam War, in Manufacturing Consent, found that questions of the invasion’s “tactics and costs”—to the US—dominated the debate, because the media absorbed the framework of government propaganda regarding the “necessity” of military intervention, the “righteousness of the American cause” and the US’s “nobility of intent.” Decades later, Herman and Chomsky’s propaganda model of corporate media is still a useful tool in understanding the Post’s Afghanistan Papers. 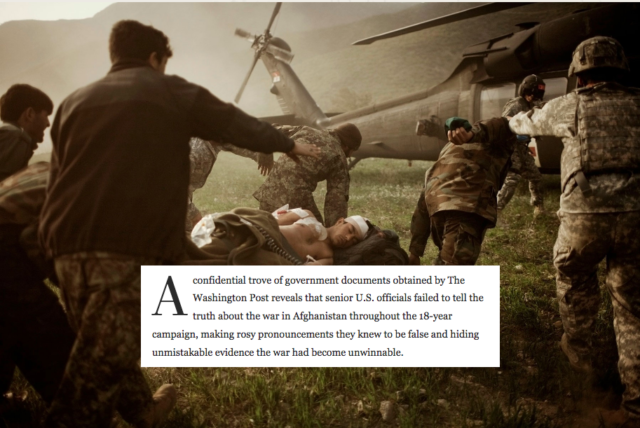 The Post advanced the centuries-old colonial narrative of the empire’s good intentions gone awry when it argued that the US “inadvertently built a corrupt, dysfunctional Afghan government,” and that this illustrated that “even some of the most well-intentioned projects could boomerang.” In fact, the Post dedicated a whole section of the Afghanistan Papers to propagating this standard colonial narrative, called “Stranded Without a Strategy,” which argued at length:

US and allied officials admitted they veered off in directions that had little to do with Al Qaeda or 9/11. By expanding the original mission, they said they adopted fatally flawed warfighting strategies based on misguided assumptions about a country they did not understand….

Diplomats and military commanders acknowledged they struggled to answer simple questions: Who is the enemy? Whom can we count on as allies? How will we know when we have won?

Their strategies differed, but Bush and Obama both committed early blunders that they never recovered from, according to the interviews. 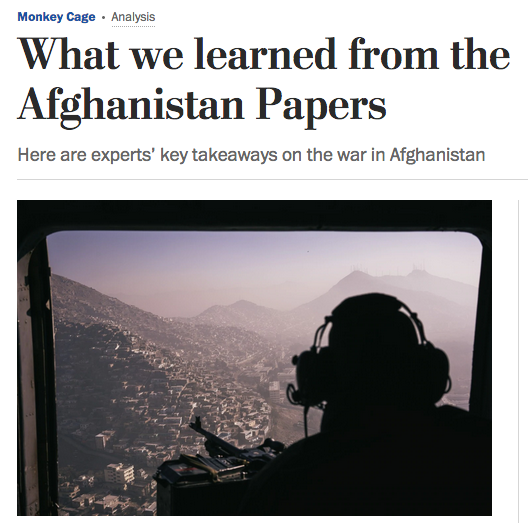 The Post is so eager to push this colonial narrative of noble incompetence that a later report (12/11/19) on “key takeaways” from the Afghanistan Papers claimed that US officials “failed to align policy solutions with the challenges they confronted,” having “strategic drift” in place of “coherent US policy for Afghanistan.” As noted earlier, one method of discerning whether US officials are being dishonest, not incompetent, is to check whether the pretexts for invading and occupying another country are constantly changing.

But the imperial utility of a cost/benefit or tactical “critique” of US wars is the implication that immoral and illegal invasions like the Afghanistan War are justifiable if the US can achieve its goals, and it enables future invasions, provided US wars are better fought next time. It’s an intentionally nebulous criterion, since there are always tactical and cost/benefit questions to be raised for any military endeavor, which is why this kind of critique can enable perpetual interventions in the service of US imperialism. Indeed, the Post actually admits this when it mentioned that the Afghanistan inspector general’s secretive “Lessons Learned” project was

meant to diagnose policy failures in Afghanistan so the United States would not repeat the mistakes the next time it invaded a country or tried to rebuild a shattered one.

Furthermore, at several times the Post parroted statements from US officials claiming that some of the “lessons learned” about their “strategic failures” were that the US should have killed more people in Pakistan and threatened to stay in Afghanistan indefinitely—without any pushback.

The Post parroted claims that “Obama’s strategy” of imposing “strict deadlines” and promising to “bring home all troops by the end of his presidency” was “destined to fail,” because the Taliban could just “wait him out.” Why was Obama’s broken promise an “artificial” date for “ending the war before it was over”? If the US truly prioritized preserving taxpayer dollars and the lives of US troops and Afghans, the open secret is that the US could simply end the Afghanistan War any time it wanted to, by announcing an unconditional, unilateral withdrawal without negotiating with the Taliban. 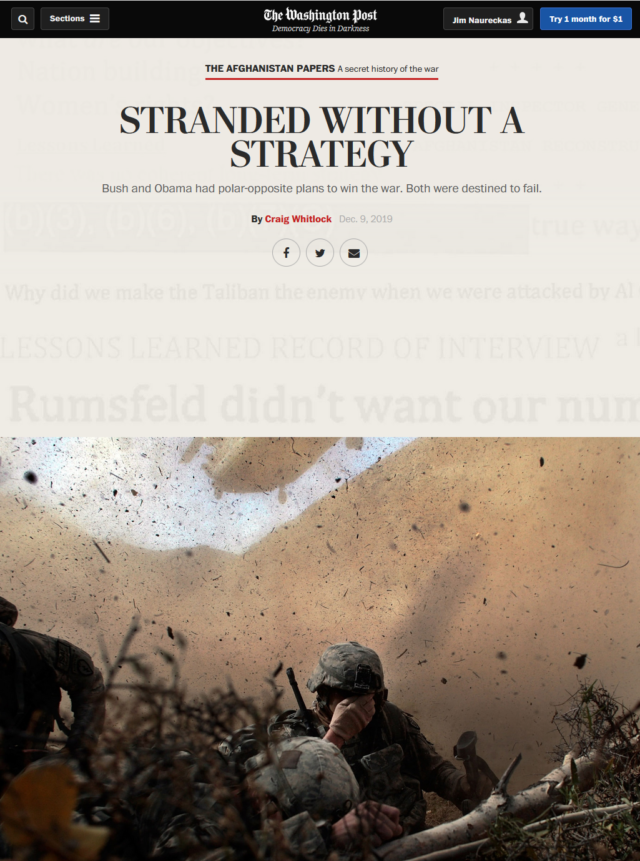 In another “Lessons Learned” interview cited in the Afghanistan Papers (12/9/19), regarding the “strategic challenge” of Pakistan supporting the Taliban and sheltering their leaders despite receiving billions of dollars a year to “fight terrorism,” the Post uncritically cited a US official’s bloodthirsty support for indefinite occupation and killing Taliban members anywhere in Pakistan:

In his December 2016 Lessons Learned interview, Crocker said the only way to force Pakistan to change would be for Trump to keep US troops in Afghanistan indefinitely and give them the green light to hunt the Taliban on Pakistani territory.

“It would allow him to say, ‘You worry about our reliability, you worry about our withdrawal from Afghanistan, I’m here to tell you that I’m going to keep troops there as long as I feel we need them, there is no calendar.’

“ ‘That’s the good news. The bad news for you is we’re going to kill Taliban leaders wherever we find them: Baluchistan, Punjab, downtown Islamabad. We’re going to go find them, so maybe you want to do a strategic recalculation.’ ”

While pushing this colonial narrative, the Post actually tried to make the absurd case that some of the US’s strategic failures stemmed from being too generous to Afghans, and lying to the American public about not wanting to do “nation-building,” asserting that “nation-building is exactly what the United States has tried to do in war-battered Afghanistan—on a colossal scale.”

Americans praising their own generosity is a hallmark feature of American colonialism—which extended to framing atrocities like slavery, the displacement of Native Americans and the extermination of Vietnamese people as “generous”—and the Post continues this long tradition by parroting US officials who believed that “Congress and the White House made matters worse by drenching the destitute country with far more money than it could possibly absorb.” Apparently the problem is not that the US intentionally funnels money to enrich US investors and prop up puppet governments subservient to the US, but that the US engages in thoughtless charity:

The scale of the corruption was the unintended result of swamping the war zone with far more aid and defense contracts than impoverished Afghanistan could absorb. There was so much excess, financed by American taxpayers, that opportunities for bribery and fraud became almost limitless, according to the interviews. 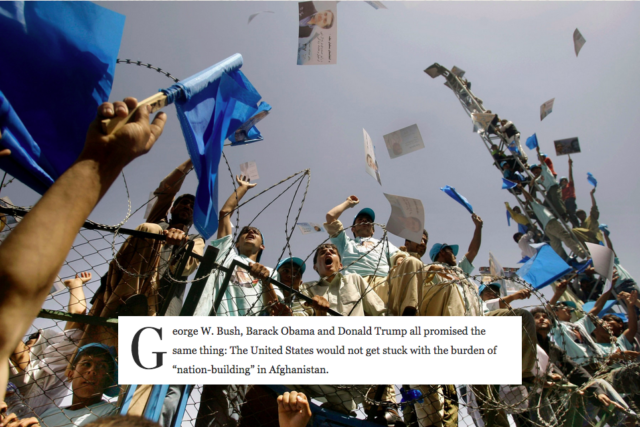 The Post (12/9/19) claimed that “no nation needed more building than Afghanistan” following “continuous warfare since 1979,” when it was invaded by the Soviet Union. The Post cited frustrated statements from officials working for USAID and the National Endowment for Democracy (NED) complaining that the US was wasting too much money on nation-building for primitive people in a largely non-market society who “bartered for items” instead of using currency, and lacked the education and “technical expertise” necessary to maintain “huge infrastructure projects,” with officials claiming “We were bringing 21st-century stuff to a society living in a different time period.”

Left unmentioned were US efforts in 1979 to sabotage an indigenous Afghan Communist movement, that was making strides toward ostensible US goals like the education of girls, eradicating opium production and expanding access to healthcare, by “knowingly increasing the probability” of luring “the Russians” into their own “Vietnam War.” (Carter’s national security advisor Zbigniew Brzezinski later defended this ruthless strategy: “That secret operation was an excellent idea. It had the effect of drawing the Russians into the Afghan trap and you want me to regret it?”)

Nor was there any mention of USAID and the NED being corrupt propaganda arms of the US State Department to subvert leftist governments, often serving as a pipeline of taxpayer dollars into investors’ pockets under the guise of promoting “development” and “democracy.” Some US officials even argued that the rampant fraud and waste from American “aid” contractors were so parasitic that it would be better to funnel contracts to corrupt Afghans, who “would probably take 20% for their personal use or for their extended families and friends,” than “‘a bunch of expensive American experts’ who would waste 80 to 90% of the funds on overhead and profit.”

And despite the Post’s attempts to portray the US as “inadvertently” building a “corrupt, dysfunctional Afghan government that remains dependent on US military power for its survival,” it’s hard to see how other candid statements about the US military and agencies like the CIA “giving cash” to “purchase loyalty” from Afghan government officials, religious leaders and warlords viewed by many Afghans as “cruel despots,” don’t contradict that assertion. In fact, Herman and Chomsky’s study The Washington Connection and Third World Fascism found that corruption is a primary feature of US client states—like the corrupt Afghan government—with US aid and a favorable foreign investment climate being negatively related to the condition of human rights in these countries. Hence the numerous reports of Afghanistan being “open for business.”

Tellingly, US officials in the Afghanistan Papers remarked that while the US actively replaced officials seeking to combat corruption, or knowingly “looked away and let the thievery become more entrenched than ever,” and retained support for US-installed CIA assets like Hamid Karzai who committed mass voter fraud, US officials had a “dogmatic adherence to free-market principles.” This is supposed to explain why, despite their “good intentions,” they consciously imposed economic policies that enriched foreign investors and increased poverty, instead of policies that would help Afghanistan, because US officials considered them “incompatible with capitalism.”

This is consistent with Michael Parenti’s study of US foreign policy (The Sword and the Dollar) finding that US commitments to “democracy” and “anti-corruption” are dispensable and easily abandoned (indicating insincerity), while commitments to opening countries like Afghanistan to foreign investment and free-market capitalism are uncompromisable. What explains the refusal to put Afghanistan on the State Department’s list of states sponsoring terrorism—despite knowing the Taliban were sheltering bin Laden—other than the fact that it would prevent US oil and construction companies from entering into an agreement with Kabul to construct pipelines to Central Asian oil and gas fields?

The immediate construction of US military bases and the resulting private businesses servicing them generated massive corporate profits for the military/industrial complex, and served as guardians for US corporations extracting mineral wealth—indications of a planned long-term occupation and a launching pad for attacks within and beyond Afghanistan’s borders. Explicit statements from the Bush doctrine—which continued to guide the Obama and Trump administrations’ national security strategy—explained that “real freedom” means free trade, the “moral principle” that “if others make something that you value, you should be able to buy it.” These are the serious, logically consistent explanations for the US invasion and occupation of Afghanistan.

The Washington Post’s Afghanistan Papers and trove of documents are worth reading through, but it’s also a contradictory mess containing many distortions and lies by omission. The scandal of the Afghanistan War is not that the US entered into and prolonged an “unwinnable” war; the scandal is that the US empire’s invasion of Afghanistan is a war crime in violation of international law, and has inflicted imperial violence on the Afghan people, and it would remain a scandal even if the US accomplished all of its ostensible goals. Even as the Post’s scoop exposes US officials as liars—and highlights the danger of credulously accepting their ideological framework—because they rely so heavily on those officials’ narratives, the Afghanistan Papers still manage to propagate the old colonial narrative of the empire’s good intentions thwarted by backwards foreigners.

Editors note: On reflection, a passage in the original version of this piece about the oil and the US invasion of Afghanistan was inadequately sourced. A claim about Hamid Karzai formerly working for Unocal does not appear to be true.