The head of the IOM’s mission in Haiti also discussed the modern-day threats and political instability many Haitians face which shares a border with the crisis-hit country. 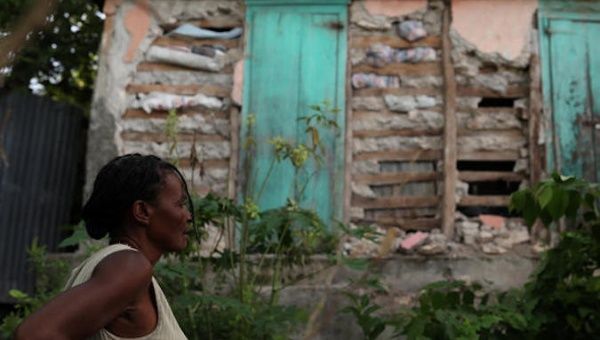 10 Jan 2020 – There are at least 34,000 people living in displacement camps 10 years after a devastating earthquake struck Haiti.

Just shy of a decade since the temblor brought the island nation to its knees on Jan. 12, 2010, the head of the IOM’s mission in Haiti, Giuseppe Loprete, told EFE about how the organization has intervened to help the population.

When the earthquake hit Haiti in 2010, there were 1.5 million displaced people in over 1,500 camps and displacement sites, he said.

“Now, we have about 22 displaced sites that are still open and 34,000 people still living in the situation of displacement, although we have to say that, after 10 years, for many of them this has become the normal situation.”

According to him, they are not either willing or do not have the possibility to move out of the displacement site, while some are even doing construction, trying to settle in these areas.

In the camps, he reported that there was no electricity for most of the day, access to waters if difficult, there are areas that you can see just walking around that are very overcrowded, overpopulated.

Since the crisis has left 3.7 million people with food insecurity, there has been a boost in immigration, and a lot of people – at least one member of the family, mostly men between 18-35 years old – are looking for job opportunities, especially in Brazil but also in the Bahamas.

It is estimated that around 1.5-2 million Haitians are living abroad, corresponding to one-fifth of the population – mostly in Canada, the US, Brazil and Chile.

January 1st marks 216 years of Haiti's independence. Here is a reminder on how much France ows to the first black led republic in the world.